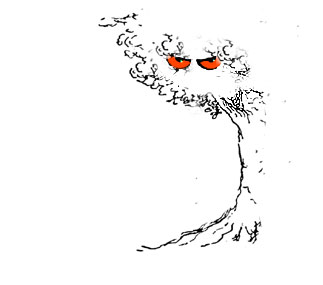 After  a long and exhausting day

in the fields of language, the learner sits on a hill under a tree, gazing at the sun as it slowly turns the horizon into a painting of red and yellow and gold. It’s been a long day, working on German is hard labor. But now it is time for the much deserved rest.
Somewhere, in the distance, a shepherd is playing the flute.
Something rustles in the tree. The learner looks up, but sees nothing. Probably just the wind, calm down, the learner says to himself. He bites his grass stalk a little faster than before.
There it was again, the rustling. Probably just the wind. But the air is still. The learner looks around. Silence. The flute has stopped. The sun has stopped, too. And then, suddenly, the learner knows. Part of him had known from the first rustling. His grandmother had been right. There was no escaping.
Slowly, he turns upward to face what he knew was lurking – a German Prefix Verb, mouth gaping, like a gateway to hell as it screeches at the learner.
He recognizes it. It is


The learner feels a bit of relief. Anfallen is an especially aggressive specimen, but not too cunning. And the learner had read about it just a few days ago. Quickly, he tries to recollect what he’d read …

Anfallen, which literally would be “to fall at”, is usually translated as to attack and the best way to think of it is to think of an animal jumping its prey. I mean, falling is a big part of jumping, right? If the lion were to jump at a gazelle on the moon, it’d be in for an unpleasant surprise.
And the image doesn’t only help make sense of the meaning, it actually kind of perfectly captures the kind of attack anfallen is used for… sudden, primal, physical and with some “weight” behind it.

So yeah, basically animal attacks.
For ANY other kind of attacking, the proper German word is angreifen … sports, wars, any kind of non physical attacks, heck even for a mosquito attacking you you’d use angreifen. That sucker is just too small for anfallen.

These dumb examples – that is something the learner would rather not remember. They weren’t funny, and they certainly weren’t of any help if a hungry prefix verb is about to pounce on you.
There was a second meaning to anfallen, the learner recalls. The article he had read in that old Almanach said, it was hard to find one translation for it and instead gave the image of  stuff falling on a “to deal with”-pile. Kind of like a to do list.
Work and costs were very common contexts, but it was also used for garbage, for example.

But it wasn’t very useful either. He sees the creature wiggle. It is going to pounce any second now.
The learner feels his heart pounding his chest. There had to be something, a weakness. Maybe the noun….

The noun for anfallen is der Anfall and it is probably more useful in everyday life than the verb. It is based on the idea of a sudden attack but the attack kind of comes from yourself, or parts of yourself. Sudden feelings, urges, compulsions or physical reactions. All these can be an Anfall and depending on context the translations can be seizure, attack or fit.

And last but not least, there’s also the adjective anfällig. And this word kind of turns around the idea because it kind of describes about how well you are defended. Like… the more anfällig you are, the easier the attack.  It’s not used in contexts of “real” attacks though and the best translation is probably susceptible.

As this example crosses his mind, the learners knows what to do. Firmly, he looks the prefix verb and as it jumps toward him, he and says:
“Hey, anfallen! You’re NOT THAT USEFUL.
The rage in the verb’s eyes turns to confusion.  Clumsily, it lands on the ground.
“You think?”, it says.
“Yes, animal attacks are rare and the second meaning is only for the books.”
“But … but… my noun is super useful.”, the creature defends itself.
“Your noun is okay-useful. No more. And don’t get me started on your r-version. That’s the epitome of useless.”
“You’re wrong!!!  Ranfallen is useful. It’s the literal meaning of an plus the verb. When a tree leans against a house and you wanna know how it got there, ranfallen is the perf..”
“Oh shushhhh…. yes, it technically means that but we both know how often people use that: NEVER!”
Sad, the prefix verb looks to the ground. The learner almost feels pity.
“Go home!” he says. And off it goes, back into the forest from whence it came, silently sobbing.
The learner sits back down under the tree and watches as the sun sinks below the horizon. He has defeated a prefix verb. Yes, his grandma was right. There is no escaping them. But another truth is… he can best them for they’re not as scary as they seem.

PS.: If you have any questions just leave me a comment. I hope you liked it and see you next time :).

PPS: Sorry for the constant opera bashing, you know who ;)