A fun look at the German prefix verb "ablaufen" and how it connects a sink, a conference and old milk. 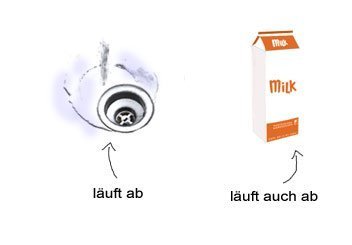 and welcome to a new episode of Prefix Verbs Explained, the series that is like that mayonnaise jar in the door compartment of our fridge. It has expired a loooong time ago, but it just stays there, watching comestibles come and go.
And that is not only an incredibly clever analogy, it also brings us right over to our “verb du jour” because today we’ll look at the meanings of

And to start you out, here are some examples for things that ablaufen: goat cheese, time, a conference, my bathtub.
Well, okay, actually my bathtub DOESN’T ablaufen properly.
So let’s jump right in.
I mean… the article. Not my bathtub.

Laufen means to walk, to run and the prefix ab can add two ideas to a verb: a notion of downward and a very very vague notion of separation, going away.
Those of you who are trained in mind yoga might already be able to sort of see a connection but the first use makes it pretty clear: ablaufen is the word for water running out of some sort of sink. It goes “away”, it separates from the sink by running downward into the drain. It’s also used in the context of water retreating from flooded areas, but it’s more common for sinks. In Germany, anyway.

As we can see in the second example, the word for the drain itself is Abfluss but Ablauf would be understood as well.
Oh and while we’re at it, another word for drain cleaner is Rohrreiniger. Would make a great Rammstein song title and it’s definitely a great word to practice your r with.

Anyway, the second big context for ablaufen is time running out, for all sorts of countdowns and periods.

And with that in mind, it makes perfect sense that ablaufen is also used in context of expiring food.

And in that context, the noun is actually not Ablauf, though that would make sense. The real word for “best before date” is  Mindesthaltbarkeitsdatum. A word so long, your milk might expire in your hand while you read it.
Cool.
Now, the uses we had so far were focused on stuff going away (water, time), but the last one we need to mention has the focus more on the journey. Ablaufen is used in a sense of events in a (planned) sequence. Or in simpler words… to go down.

The corresponding noun der Ablauf is pretty common in a business context and since some of you have asked me for more business German, I’ll give you an example for that, too.

I’m not an expert on business German/English. But I think that’s roughly how it works.
Anyway, so those were the different uses of ablaufen. And if you’re familiar with the Ablauf of this show, you know what’s up next… exactly. The r-version.

For very very very reasonable reasons that no-one knows verbs with ab- as a prefix don’t have a “real” r-version. So there is no rablaufen. But there is herablaufen and just like r-versions its meaning is the literal, location-focused take on the verb-prefix combo. So the meaning of herablaufen is to walk/run down. Theoretically, it works for people running down stairs as well as for paint walking down walls. But in reali… what? … oh paint doesn’t walk down walls? Well, FYI, this one does because it is Spider-Paint. It can also run, of course. If it’s in a hurry.
Anyway, in reality, people use runterlaufen for these contexts. Herablaufen sounds a bit too fancy, high register and I can only imagine it in a book.

And that’s it for today :). This was our look at the various uses of ablaufen and I hope you could see that even though they’re all very different, they share a common theme.
As always, if you have any questions or suggestions about the meaning of ablaufen, just leave me a comment.
I hope you liked it and see you next time.

Oh by the way…

I have an assistant now. Yeay. That’s great because we can now do stuff I never had the time for.
And we’re planning to include a little quiz at the end of the articles, so you can check if you got the most important points. We’re still looking for a system but we thought to give you a little preview, so let me know how you like it, and if this is helpful :) !

Test yourself:
1) Which two ideas can the prefix ab add to a verb?
a) downward-ness (yes, I know it’s not really a word)
b) upward-ness
c)  separation/going away
d) toward-ness
e) Gui-ness
2) Which is the best word for the drain of a sink
a) der Ablauf
b) der Rohreiniger
c) der Abfluss
d) der Abgang
e) der Po
3) Which of the following is NOT a translation of “ablaufen”?
a) to run out (for time)
b) to expire (for food)
c) to finish (for tasks)
d) to end (for contracts)
4.) What’s the right word for “Best Before Date”
a) der Ablauftermin
b) Beste-Vor-Datum
c) das Mindesthaltbarkeitsdatum
d) Mindestkühlschrankauffenthaltsdauer
e) Issmalvordatum
5.) “Herablaufen” sounds fancy.
Which of the following is the colloquial sounding choice for “to walk/run down”?
a) herabgehen
b) runterlaufen
c) rablaufen
d) untenlaufen
e) verdammt herablaufen
Solutions:
1) ac 2) c 3) c 4) c 5) b