A quick look at the meaning of "abgehen" and what stickers have to do with wild parties. 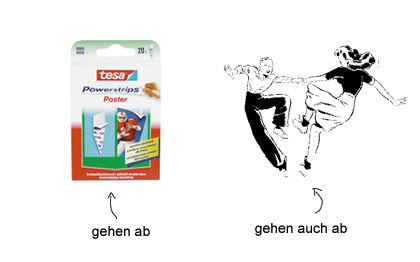 back from vacation I am and  hell bent on explaining German down to its underwear – whatever that means :).
Welcome guys to a new episode of Prefix Verbs Explained. The series slooooooooooooooooooooowly draws to a close, but there are still a few really good ones to talk about. Today we’ll look at one that’ll turn your boring, stiff textbook German into super fly street German. Seriously. Everybody’s secretly gonna be like “Wow, is [insert your name here] a native speaker?”.
Get ready for a look at

As most separable prefixes, ab has two ideas it can add to a verb – one is about location and the other is more or less or abstract. Usually more ;).
The locational aspect of ab is downward,  the other part is the idea of separation and parting. Just think of an apple tree. When apple and tree separate, then the apple moves downward. Well, except, if the apple has a jetpack, but apples nowadays rarely have jetpacks anymore. Not like back in the day, when fruits were still tasty and and apples had jetpa… oh boy, what am I even saying.
Anyway, so downward and separation – those are the two ideas that ab can add to a base verb.

Now, our base verb today is gehen and of course that’s the German version of to go. And in combination with ab it can also mean to come.
Now you’re all like “What?!?! To go means to come now? This language needs to see a psychologist.”
Well, German actually has been seeing a shrink for a few years now, but they have more important things to talk about (I think they’re working on the trauma that caused the n-declension at the moment).
Gehen as to come isn’t really an issue think about it: going in, coming in – the difference is really just perspective. And so it’s not that crazy that abgehen means to come off.  English uses to come, German uses to go, but the idea is the same.

Now, this meaning of abgehen is already a nice little addition to your vocab. But  what makes abgehen a real must have is the second meaning
And for that,  it’s best to think of a rocket lifting off. That’s not the meaning, mind you, but the idea. It’s really hard to find one translation or even describe what it is, so let’s just look at some examples.

Did you get an impression? There’s always an idea of a great or impressive performance of some kind. Like… abgehen is about being super cool or intense with a very active component. I know this is super vague but I don’t really know how else to describe it. I really think the image of the rocket is best way to think of it, but if you’re still uncertain let’s talk about it in the comments and flesh it out a little better.
Here’s a couple more examples.

In the last example,  abgehen is pretty much to be going on and that’s also the focus of a super common, very colloquial way to say hi.

This one does sound  a bit schoolyard-y. Like… it’s one of those phrases that kids would NOT want their parents to use. Unless their parents are renowned hip hop artists. But that limitation is really only for the greeting. All the other examples are something also 40 year olds would say and if you want to spice up your German with some authentic slang… this abgehen is definitely a good pick.
Cool.
So, so far we had to come off and this “rocket”-abgehen. Is that all? Well, no, there’s one more meaning that we could mention and it’s actually the most literal one. Abgehen can mean to leave the stage or the scene. This one is absolutely limited to the context of theater though. It is NOT a valid option of you’re leaving the meeting to go to the bathroom.

This idea of leaving the scene is also the core of the noun  der Abgang and this one is not as limited as the verb.

The last example is probably the most literal interpretation of the combo of gehen and ab we’ve seen so far.
But if you’ve read some episodes of this series you already know that for the REALLY literal meaning, we need a version.

Verbs with ab- do not have a proper  r-versions . It doesn’t make all that much sense that rangehen exists while rabgehen doesn’t. For some reason (I suspect THIS ONE)  the “parents of r-versions”, the her-versions, just never had kids for the ab-verbs. Herabgehen exists though and it’s pretty literal and  literary.  Literal because it is about actually walking down somewhere, so like r-versions usually do, it takes the combination of verb and prefix literally and literary because it sounds super high brow. Herabgehen is for princesses, what normal people do is runtergehen.

And that’s it for today. This was our look at the verb abgehen and if you’re a stage director at a theater or musical, then this is one you’ll definitely need this one.
Oh and if you want to speak authentic modern colloquial German, then you’ll need it too. Abgehen geht ab :).
As usual, if you have any questions or if you want to try out some examples, just leave me a comment. I hope you liked it and see you next time.