What do a closing door and random coincidence have in common? They both relate to the German verb "zufallen". Today, we'll find out why. 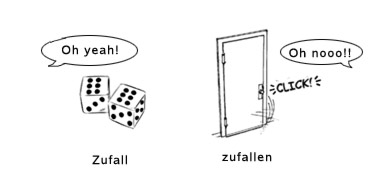 and welcome to another episode of Prefix Verbs Explained. This time we’ll have a look at the meaning of

Fallen means to fall. And zu has two notions in store to add to that: toward-ness and closed-ness. Seems a bit random a couple but those two ideas are actually connected. How? Well, toward-ness was there first, just like in English to, but then the old Germans started using zu in context of moving a door – toward the frame. Until it’s so close to it, it’s closed. Yep, I know that sounds silly but that’s really how zu got that idea of closed.
And doors are actually the perfect context for the zufallen.

Zufallen is what a door does when closes quickly by itself. You know… you’re asking the hot new neighbor for some salt (and flirt like hell) and bam. You’re locked out. Door – best wing man ever.
Besides doors, this zufallen also works for windows and it is super common for eyes in sense of being really tired.

Coo.. So this was zufallenwith the closed-zu. Now let’s get to the one with the toward-zu.
Zufallen, literally “falling toward”, expresses the idea that something is coming to you or upon you. Not for rain, but for abstract things like tasks, work, knowledge or skill.

Now, the fallen gives the whole thing a slight vibe of a force of nature or fate or an accident. And this that is especially present in the noun der Zufall, which is much much more common than the verb itself. Der Zufall is the German word for coincidence. And as different as these two words may look – they are almost the same thing. Coincidence is a prefixed version of the Latin cidere. Cidereis just a form of cadere and that meant… to fall. Tadah.And coincidence–Zufall is not the only pair where that shows. An accidentis der Unfall,an incidentwhich is der Vorfall and decay which is der Verfall.Oh, and not to forget the wordcase which in German is der Fall. What a bunch of coincidences :)

Now, Zufall is actually much broader and hence more common than coincidence. People basically use it whenever there’s an element of random.
Let’s look at some examples.

Oh and guess where chance comes from… exactly. Cadere, the Latin to fall. Anyway, back to the examples.

Now, as useful and common as zufällig is (and it is really useful and really common), there’s one thing we need to make clear:

IT NOT THE WORD FOR RANDOM!!!

It can express the idea of random, yes; it is used in contexts where you’d use random, yes. But it is not gonna be a translation for it.

I can’t stress it enough… don’t use zufällig here. It makes little sense and doesn’t sound idiomatic at all. So what to use instead? Well, the truth is: German does NOT have a good translation for this colloquial random. It’s simply missing. And isn’t a good work around either. If you ask me to translate this:

That’s right. Nothing. I do not know how to express that in German. Well, okay… maybe something like the kitten was cool or something.
Anyway… even though they’re not as common as random,zufällig and Zufall are really useful and you should take them into your active vocabulary.
And because balance is always important, let’s now look at something that’s …. uh… not all that useful

The r-version of zufallen is rzufallen. But the u and the a are silent so you should pronounce it rzfllen. To pronounce this you just need to pull back your tongue while turning it twic… okay, of course that’s nonsense. There is no r-version for zufallen because there never is one for a zu-verb. Sometimes there’s a generic hinzu-version (or a dazu-version) that has its place and use but not really for zufallen. Technically, it exists …

… but it’s not something you need to remember so here’s your countdown to forgetting it…
3…
2 …
1….
Wait, why were we just counting down?

Anyway, that’s it for today. This was our look at the meaning of zufallenand the real takeaway is the word Zufalland zufälligwhich are about chance, coincidence and randomness. And which are NOT translations for random :).
As always, if you have any questions or suggestions just leave me a comment.
I hope you enjoyed it and see you next time.

meanings:
– snap closed, close itself (doors, window, eyes)
– to fall to somebody

spoken past:
form of “sein” + zugefallen

useful phrasings:
Was für ein Zufall – What a coincidence.
Komischer Zufall – strange coincidence
Hast/kannst/weisst… du zufällig…. ? – Do you happen to… ?