A thorough look at the German preposition 'zu' - what's its core idea, how does it work as a prefix and which verbs and phrases want "zu" as a preposition. 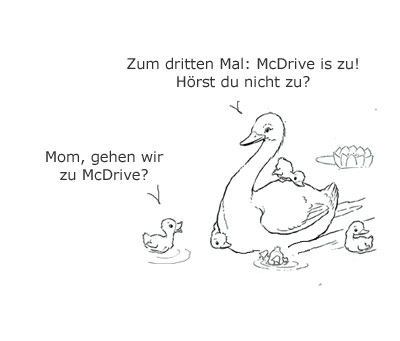 and welcome to a new episode of the series German Prepositions Explained, this time with a detailed look at

As usual, we’ll first check out what the word means as a preposition, then we’ll see if and how this connects to its use as a verb prefix, and finally, we’ll take a look at the annoying … ahem zoo… of fixed combinations of the preposition with certain verbs. Which is kind of special in case of zu because there are many and none. Dun dunn dunnnnn.
So are you ready to jump right in?
Then let’s go….

I think it’s not a surprise to any of you that zu is related to the English to and too. The origin the Indo-European stem that was about pointing at/to something and that’s pretty close to the core idea the word has today which is… “toward-ness”.

“zu” as a preposition

Zu is one of the two main German word to indicate where someone (or something) is headed. The other word is Bar.
Nah, kidding. The other word is in. We’ll talk about the whole “Talking about location”-stuff in detail in a separate mini series soon (in about 153 years) but of course we can’t completely ignore that here. But I want to address one other thing real quick, for the beginners among you.
Besides zu, there will also be zum and zur in the examples. Those are shortened versions of the combinations zu der and zu dem and they’re not just something people use in spoken. They’re kind of “officially” shortened.
And those articles bring us to the other point: zu is one of the Dative prepositions. That means that it is ALWAYS followed by Dative. A l w a y s.
And just in case you’re wondering if there’s also zun as a short form of zu den (the plural Dative article) … the answer is no. We tried to get a comment from German as to why not, but we haven’t heard back so far.
Cool.
So now let’s take a look at what destinations zu is used for:

One important group of zu-destinations are…. people.

Using in here is technically possible, but it would be understood as something very very very very very different.
Anyway, people doesn’t only mean names but also extends to job titles

… and also – and this might throw you off a bit – to all kinds of stores, if you refer to them by their brand name.

Of course you do usually enter McDonalds but using in here would sound super wrong. The brand name basically personifies the store.
Cool.
So far, we have persons and personifications. But there’s more.
Zu is also used for events like parties, festivals, concerts, meetings and so on.
(often auf is also an option for events)

And we don’t actually need too much mind bending to get from the location-focused idea of to an event to the more abstract context of for an occasion. Which is also expressed with zu. Like.. for Christmas, birthdays or promotions. Or for lunch. Or just for the second time.

And if we think of events and occasions as a general idea of “stuff happening, stuff going on”, we’re pretty much right right at the last group of zu-destinations: activities.

Activities… hmm… those are usually represented by verbs, right? Let’s make a mental note of that for later ;).
But yeah… generally, zu expresses “toward-ness without entering” and the big three groups we can make up are:

This is not super strict and there are exceptions. And oh… there’s one use we should mention, because it’s super confusing.

We reached out to German for comment but we haven’t heard back so far :).
Cool.
So now that we know when to use zu as a preposition, let’s take a look at zu as a prefix.

Prefix verbs usually keep the core idea of the preposition they’re made with, but they are much more “open-minded” with the interpretation. Like… really open. Which is ironic in case of zu because… but I’m getting ahead of myself.
So, we’ve seen that zu has this basic idea of toward-ness and for some it’s pretty obvious.

But the other common ones are not all that obvious anymore. Take zulassen for instance, which means to allow, in a sense of letting it happen. If we think of that as “letting toward reality” then we have a connection, but yeah… it’s kinda random.

Or how about nehmen and geben. Nice pair, right? But once they get zu-, they don’t have much to do with one another anymore. Zugeben means to admit, zunehmen can mean to increase, and also to gain weight.
Same thing for zustellen and zustehen. You’d expect there to be some connection in meaning but nope… nothing. Zustellen means to deliver in context of mail; which is kind of straight forward… well, at least if you think of a large parcel. Zustehen on the other hand means to have a right for something. And Zustand is condition (as in shape).

I mean… none of the meanings is completely crazy. Admitting is kind of about giving toward, gaining weight is kind of about taking toward. And being one’s right is kinda sorta standing toward. But the meanings are nothing you could guess from just looking at the parts. There are a few more useful words and I’ll give you a little list later. But first let’s look at the other core idea of zu whi… oh.. hold on, we have a call… Takumi from Japan, welcome to the show.
“Konichiwa Emanuel, thanks a lot for taking my call.”
No problem, how can I help you.
“So I’m wondering if these verbs have any versions. Like, something like the r-version that you usually talk about in the series about prefix verbs. I think you mentioned that rzu- doesn’t exist, hahaha”
Oh, great question!!! Yeah, rzu- doesn’t exist. But you can make da-versions and hin-versions for some of them.
“And I guess the meaning is pretty literal, right?”
Exactly, the core idea is adding. Dazugeben ( hinzugeben) for example is to add in context of cooking. And dazusetzen is kind of to add yourself to someone’s sitting. Like… imagine there’s hill, on top is a bench with a beautiful view and there’s a beautiful lady sitting there and you want to ask her if it’s okay for you to sit down. Then you’d say this

But there aren’t many useful versions that I can think of. And you’ll definitely understand them from context.
“Cool, thanks a lot.”
No problem! Hey, do you wanna join me for a bit.
“Sure, why not…”
So,like many prefixes, zu- actually has two core ideas. Do you know what the other one is?
“Uh… something with closing right?”
Exactly. In fact, zu by itself means precisely that… closed. And the opposite is auf, by the way.

“Is there any difference to geschlossen?”
No, geschlossen is just longer and zu is way more common in spoken German and there are a few really useful prefix verbs. Zumachen is a colloquial version for to close, to shut, zulassen means to leave closed and zugehen is to close by itself.

Oh, and I almost forgot zuhaben, which means to be closed for stores and stuff like that.

“Wait… is there any difference to zusein?”
Uh, not really. Zuhaben makes it sound a bit more like a person,maybe. Oh, and zu sein is actually two words, not a prefix verb.
“But… but why? That doesn’t make any sense?”
Haha, no it really doesn’t. And before our last spelling reform, zusein was a thing. But not anymore.
“You’re kidding, right?”
No, actually I’m not. They really changed that part.
“They changed the spelling rules to make one prefix verb into not a prefix verb … breathes heavily…. while leaving one with the EXACT same meaning untouched?!?!?! Argh, the German language BS is getting too strong! I need to change into my final form to handle this: Swole-Takumi!!! Huahhhhhhhhhhh…. click”
Hello? Takumi? Swole-Takumi, are you there? Hello? Hello?
Hmmm… the connection broke up.
Anyway, so yeah… the main idea of zu as a prefix is toward-ness but with a few really common verbs, the prefix also carries the idea of closed. And the one big question is of course why. Like… is there any connection?
And yes, there is. Think about it… when you’re closing something, you move one thing toward another.
When you zumachen your mouth, you’re moving one lip toward the other. When you zumachen the window, you’re moving the window toward the frame. And if you’re now like “Emanuel, you’re forcing it.” then just take a closer look at to close. Same idea… you’re move parts close to each other :).
Cool.
So this is zu as a prefix and I think that’s also enough for today. We’ll leave the rest for next time. Then, we’ll talk about those infamous fixed prefix-verb-combinations and because that’s gonna be a surprisingly short affair, we’ll also look at dazu and go over a few nice expressions and with that.
Below, you’ll find a list of the most common and useful zu-words. We’ve talked about a few of them in details, so you can dig even deeper :).
And as usual, if you have any questions about what we’ve talked about so far, or if you want to try out some examples, just leave me a comment.
I hope you liked it and see you next time.

zugehen – close by itself, let itself be closed; with “auf”: go toward something/someone
der Zugang – the access; can also be used for places you can actually enter
zugänglich – accessible

zugucken – watch (very “active”, not for movies, also not for contexts of guarding)

zuhaben – to be closed (for stores and bars)

zuhören – to listen (very “active”, not for just listening to music)
der Zuhörer – the listener

zurufen – shout something to someone

zu sein – to be closed

zusagen – formal sounding “to say yes”; with Dative also “be appealing to someone”
die Zusage – formal way for “a yes” (an “affirmative”)

zusehen – same as zugucken; also used in sense of “to see to it/make sure”

zustellen – deliver mail, can technically also mean that you close something by putting stuff there
die Zustellung – the delivery (mail)

zuwerfen – throw toward someone (without intention of hitting)