Zeug means stuff. And Spielzeug literally means playstuff. But there's much more. Zeuge is witness and überzeugen is to convince. Today, we'll find out why. 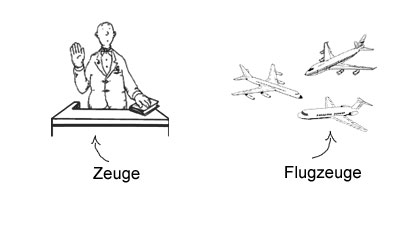 I’m pretty sure most of you have seen this word – as a part of the word Flugzeug. Flugzeug means plane and the literal translation is… flight stuff.
When they find that out, many people go like “Wow, that’s so funny. Stuff to fly with. German is hilarious.”
But when you think about it, you gotta ask yourself … really?! Like… is that really possible? Were the engineers back in the day really like,

“Yeah, this miracle here, a machine to fly with. What should we call it?”
“Flight … uh… stuff. Flightstuff.”
“Yeah, that’s great!”

Well, today, we’ll find out how the name came about. And not only that. We’ll also learn what other Zeug there is and I can promise you… it’ll be surprising stuff. So … are you ready to take a look at the surprising, fascinating world of Zeug?
Awesome.

Today, Zeug by itself really does mean stuff.  It works best for tangible stuff but it’s not limited to that so you can find it used for abstract stuff, too.

Zeug has a tendency to sounding a little disrespectful. Or at least devaluating… more so than stuff, I’d say.

Now, looking at this negative tone, the word Flugzeug is even stranger. Flight crap. I mean… sure, travelling with EasyJet and Ryan-Air isn’t exactly a Spa experience, but overall they’re pretty reliable pieces of technology, right?
The solution to Flugzeug and all the other Zeugs we’re about to see lies in the original meaning of the word.

Zeug wasn’t always just stuff.  And it’s actually part of a very, very well known family…. the ziehen-family…. ziehen, Zug, Zeug. Quite obvious.
Now you’re all like “Wait, ziehen means to pull. What the hell???”
Well, the original meaning of Zeug was kind of like this:

thing you “pull to you” to do something

And people basically used “pulling something to you” to mean to use. Maybe think of Zeug as “the (thing) drawn upon”, if that helps you make a connection.
So…  a Zeug was basically a thing you use for a task, a tool. A Flugzeug is flight tool. And there are many many more words like that.  A Werkzeug (“work tool”) is a tool, a Fahrzeug (“fare tool”) is a vehicle, a Spielzeug (“play tool”) is a toy and a Feuerzeug (“fire tool”) is a lighter. Actually, lighter is a great one to remember the connection to ziehen… the lighter is what you PULL out of your pocket when you need fire.
Now, Zeug as a stand-alone word has for the most part lost that whole tool-notion, but there are a few nice expressions where it’s still alive.

The second one is probably based on the idea of getting ready for battle by putting on armor. Because armor and weapons where also called Zeug 200 years ago.
Yeah… it was used for a lot of stuff. That’s probably why it ended up meaning stuff :).
Anyway,  the idea of “thing drawn upon for a task” was the core idea of Zeug for more than 1200 years. Enough time to grow out some new words; small blossoms at first, but soon solid branches of meaning.
“Emanuel, blossoms don’t grow into branches, they grow into flowers.”
Oh… uh… whatever.

Suppose you want to do something and you need a Zeug (tool) for it – what do you do? You get it from somewhere. This was the idea of the verb zeugen. “Getting what you need to get the job done”.
Now, what if the thing people needed didn’t exist yet? Like… imagine there’s an evil dragon pillaging your village and to kill it you need a magical sword. But there’s none to be found. Not even on Amazon Prime. You’ll then go to the smith and the sorcerer and tell them to create one ASAP.
Yeah, stupid story, I know. The whole point is that zeugen slowly took on the meaning of producing, making, creating and this idea is still alive today.
The verb zeugen itself has narrowed down quite a bit, though and is only used in sense of creating one thing…. life, babies.

But there’s also erzeugen and this is much more broad and common and means to create, to produce.

As you can see, erzeugen is used for more abstract creations or products. Anything pretty much, except pieces of art. It’s not “creative” enough for that.
In context of machines and factories, herstellen or produzieren are usually the better words.  But the noun das Erzeugnis also works for factory products.

Milcherzeugnisverordnung….. man,  legal German. That’s where the real compounds dwell. And if words like this make you tired, you better get a big mug of coffee because one of the main uses for the next idea of zeug is … at court.

Some thousand or so years ago in a village somewhere, Thoralf the farmer had an inkling that his neighbor secretly let his sheep graze on Thoralf’s land. But he needed proof.
So he thinks of a ruse; he puts a bit of coal dust on the part of the field next to his neighbor’s land.
A few days later, the grass on Thoralf’s land is again magically a bit shorter, he complains to the village counsel. Of course, the neighbor denies the allegation. Lush as his land is, he says, he doesn’t need anyone else’s. A good point, the counsel members say.
But Thoralf explains what he did and asks that a sheep be brought in. And when the people saw that there was coal on its hoof, they know Thoralf  was telling the truth.

Now you’re like “What the hell does that stuff have to do with Zeug?”.
Well, we’ve learned that the very core idea of Zeug was “something you “pull” or use as a means to an end”.
Well, in our story needs a “tool” to prove his story. A piece of evidence. And back a thousand years ago, Zeug could mean just that. A tool to prove your story.
Now,  today Zeug does NOT mean proof anymore. But the idea is still alive in the related words.
For starters, there’s the verb zeugen. Yes, again. Zeugen von means to give evidence, to bear witness.

This zeugen is kind of fancy sounding, though.
The more dry and more common version is bezeugen.

Note that bezeugen always needs an object. So you have to bezeugen something. It’s not the general to testify in front of a court and it is also not to witness in the sense of seeing something. For that, you’d say to be a witness which brings us right to our next word: der Zeuge – the witness. In the original sense of someone you “pull” to court.

Then, there’s the noun das Zeugnis, which is something that bears witness to something – a testimony or certificate. The most common use is within the context of school: the paper with your grades.

And last but not least, we have the verb überzeugen which is what evidence usually does: to convince.

And you know what’s really cool? Überzeugen actually brings us full circle, back to the beginning and the idea of pulling. Because… when you convince someone, you pull them over to your side :).

And since we’re back to where we started that means we’ve finished our tour. This was our look at the meaning of das Zeug and the long list of vocab below really bears witness to the usefulness of the family.
What would be really, really awesome now would be a crisp recap to sum up all the crazy ideas so… if you find one somewhere let me know and I’ll put it here ;).
Yeah… I’m an ass, sometimes.
As always, if you have any questions or suggestions about what we’ve learned today, or if you want to try out some examples, leave me a comment.
I hope you liked it, and see you next time.

der (Augen)Zeuge/die Zeugin – the (eye)witness
zeugen von – testify to/be a sign of
etwas bezeugen – testify to, bear witness to
das Zeugnis – the certificate, the grades (at the end of a school year), rare also: testimony
überzeugen – to convince
überzeugt – convinced, also: sure, fond
überzeugend – convincing(ly)
die Überzeugung – conviction (NOT in sense of law), believes
aus Überzeugung -out of conviction