Word of the Day – “der Wahnsinn”

A quick look at the meaning of "der Wahnsinn" and how to use it and its relatives in conversation. Special mention: erwähnen :) 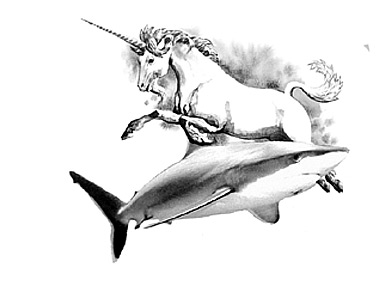 and welcome to our German Word of the Day. Because I’m here with Johnny the Unicorn today and together we’ll talk about the meaning of

Are you ready, Johnny.
“Can’t fucking wait.”
Awesome. But hey, please, no swearing. Leave that for the magical forest.
“Haha, okay.”
Cool, then let’s jump right in….

So Johnny, do you know what Wahnsinn means?
“No, not really…. but I do recognize Sinn. That’s sense, right?”
Exactly. And Wahnsinn is the opposite.
“Nonsense?”
Oh…uhm… no. Hold on, let’s try with the adjective wahnsinnig. That is the opposite of sensible, reasonable.
“Unreasonable?!”
Well, stronger. Like… a unicorn eating a vegan diet.
“Ohhhh, you mean crazy!!!”
Exactly! Wahnsinnig is crazy, insane …
“And so der Wahnsinn is insanity?”
Exactly… or madness or lunacy.

“Okay… so Sinn is sense, but what is Wahn exactly?”
Well, that’s where the whole idea of crazy comes from. Der Wahn by itself can mean delusion or mania. It’s most common in compounds.

“Hmmm, I’m not sure I understand the difference between Wahn and Wahnsinn?”
Well, Wahn is more seeing something that’s not there. Like… a strong version of that. The origin is actually pretty helpful, because guess which word Wahn is related to….
“Uh… I don’t know.”
To wish. Just like to win, it’s part of a big family of words that are about what you want. Wahn has shifted from wishing to actually thinking it’s there, even though it isn’t.
“Oh, that makes sense. And Wahnsinn is more the general state, right?”
Exactly.
Now, what makes these words really useful is how they’re used as a way to express “intensity”. Not sure how else to say it… like… in English when you say something like “Your hooves smell like crazy.”… they do, by the way.
“Yeah, unicorn hooves are like that. We can’t do anything about it. It’s hormones.”
Well, it’s awful.
Anyway, so yeah, Wahnsinnis used very often as an expression of astonishment and wahnsinnigis super super common alternative for very.

“Wait, so in this colloquial use, the noun Wahnsinn is basically the counterpart to the English adjective crazy while wahnsinnig is extremely.”
Exactly, and especially that second one is wahnsinnig common and you should definitely add it to your vocabulary.
“Cool.”
Now, as far as related words go, there’s the verb wähnen. It’s about the idea of thinking that something is the case, when it really isn’t.

“Hah… yeah, they always think that right before we put our teeth in their neck. Stupid bunnies.”
Ewww…
“Sorry, man, we gotta eat.”
I guess… anyway, I think wähnen shows quite nicely the connection to wishing. But in practice is pretty pretty rare… like… “forget about it”-rare. The only reason I wanted to explicitly mention it is because it quite looks like the verb erwähnen…. which means to mention.
“Yeah, I was gonna ask. I see that one a lot.”
Now, it might be really hard to see a connection to Wahnsinn and that is … because there is none. Erwähnen is actually related to the family of the word voice.
“Which is related to the epos and epic.”
Is it?
“Yes. And now I must go.”
…** pooooofffffff **….
Johnny? Johnny, where are you? Johnny, bro?
He just disappeared… hmmm. I guess, he had to go to work or something.
Anyway, here are some examples for erwähnen…

And that’s it for today :).
This was our quick, crazy look at the meaning of Wahnsinn.
As always, if you have any questions or suggestions, just leave me a comment.
I hope liked it and see you next time.