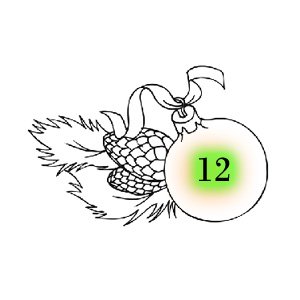 and welcome back to the epic Advent Calendar. Today, we open door number 12, so we have reached …. halftime.
And you know what that means.
Yes, that means halftime show. So here they are, live for you…. GIVE IT UP FOR MAROON FIVE.

Nah, I’m kidding. We’ll get the other thing you commonly see at halftime: ads :).

Every now and then someone reaches out to me and asks me to review a learning resource they’ve created. I’ve done it in the past but I have realized that I really don’t like doing this. I’m not learning a language at the moment, and most resources are the same stuff more or less. Like, everyone offers Spaced Repetition but they sell it like it came straight from Space research. I rarely feel like I have anything to say about the product, because I rarely feel anything in particular other than “Another one.”
But still I felt like they definitely deserve a shoutout, and so I decided to introduce two of them to you today.
And teh first one is an app to learn the noun gender.

This is an app for practicing the noun gender. I’m sure it’s not the only one of its kind, but I actually really liked the concept of this one. They have organzied all the little hints and rules of thumb that German has into what they call a “Zoo of Rules”. Step by step, you explore this zoo and make yourself familiar with the “inhabitants”. These rules are really helpful, but there are quite many of them, so it’s easy to get confused. And I think the approach of the app is really helpful there. And it looks really nice, too.
Here’s their promo video

The only downside is that it’s only available for the Apple portion of devices. So only iPhones and iPad and so on. And they’re NOT working on a version for Android because they’re elitist Swiss snobs that don’t like the common man’s operating system.
Nah, kidding… they’re really nice people. I think this app was more like a pet project they did, and developping for two platforms is a lot of extra work.
But yeah, if you want a nice way to train noun gender and you have an Apple device, give this app a try:

And if you don’t own an Apple device, no worries. The next app might be for you.

VocApp is a vocabulary trainer from a small company in Poland. There are loads and loads of flashcard app available and the only one I have tried is Memrise (it kind of sucks). So I can’t really do a proper review. But as far as I can tell, VocApp has everything you’d expect from a vocabulary trainer. You can use premade sets, or create your own. There is audio and some cards have pictures. And you can use the app as a dictionary and add words you looked up to a study decks. That’s actually a neat feature :).

And you know what the best thing is? VocApp has some giveaways for you guys.
VocApp is a freemium thing, so you can install it for free and use a huge portion but there are some premium bits for which you have to pay.
I honestly can’t tell you what that is exactly, because I didn’t do… I mean, my interns didn’t do their research properly. But it doesn’t really matter, because VocApp is sponsoring 15 premium accounts for you. Pretty great, right?

What do you have to do to win?

Well, since this is the ad section of the calendar, I want you to:

write a comment why VocApp is the Flashcard app to end all flashcard apps – the best there’s ever been, never to be dethroned.
I’ll pick the most convincing 15 for the win.

So get creative :).
And if you want to check it out, here’s the link to the German version on Google Play store. Give it a look!

And that’s it for today. If by any chance you’ve used either of the two apps, please share in the comments how you like it.
And if you haven’t used either, what are your impressions?
Can’t wait to read all your praise for VocApp.
Have a great day and bis morgen.