"a lot" has two main translations in German: "viel" and "sehr". But they're not interchangeable. Today, we'll find out when to use which. 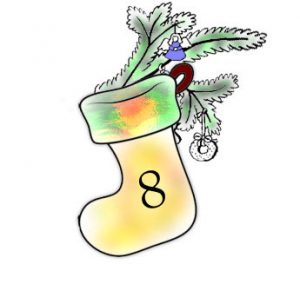 day eight of our epic advent calendar, and today is the day of reckoning!!! Dunn dunnnn dunnnnnnnn!!
Reckoning for one of those mistakes that virtually every German learner makes.
No, I don’t mean learning German. That’s not really a mistake but rather freely chosen calvinistic self chastizing.
The mistake I am talking about is:

mixing up viel instead of sehr.

This seems to be the direct translation of this:

But it’s wrong.
Proper German would use sehr instead of viel.

So what is going on here? Why is that mistake soooo common?
The key to it is a different perspective that German and English (and possibly other languages) have on verbs.

You see… the phrase a lot is at its core about quantity.
How much did you eat? A lot. The German counterpart of that is  viel. Viel can mean many, much and a lot but it is always about quantity.

On the other side, there’s the word sehr. The English counterpart of that is very and the core focus of those is intensity. Like… how funny is the joke? What’s the intensity  of the “funny” of the joke? Very funny.
Here’s a couple examples where German and English line up.

Sorry Thomas, but that’s just how it is. A prefix verb card game… puhleeze. Oh wait, actually that’s kind of a… hmmm…. anyways, uhm… in the first example we’re talking about the quantity of a thing, in the second on about the intensity of a feature.  No problems there.
But that changes when we’re trying to assess verbs.

English uses the quantity-approach, German goes for intensity here. That would sound SUPER weird in English, because very just can’t stand alone like that.

That’s actually pretty cringe :).
Now, while English is consistent about using quantity-wording for that kind of stuff (a little, a bit, a lot),  German is … well German.

Here, it uses the quantity-approach, too. And on the upper end of the scale, German uses both ways… and makes a distinction in meaning. Yeah… I know you hate it :)

The first two sentence are about the quantity of laughter. Maria is laughing in many instances, and we set a new personal record on our laughter counter App. Hold on, let me actually share that on Facebook real quick… look friends. Look how much we laughed. Billions and millions of laughing. Suck on it you funless nerds… erm….where were we.
Oh yeah right… in the second two examples talk about the intensity of the laughter. Maybe it was just 5 minutes but it was intense.

So… to boil all that theorizing down into something that actually helps with the daily grind of speaking German, here’s a couple of tests.

If the focus is on the amount, then it’s viel.

If you can say intensely instead of a lot,
then it’s most likely sehr.

The first one is clearly about the amount of sleep you got. And “I slept intensely” sounds a bit meaningless. At least to me. That’s why it’s viel.
The second one on the other hand works quite well with intensely. It is about the intensity of your feelings, not the number of times. That’s why it makes perfect sense that it’s sehr.

Exercise about this is coming up to an Advent Calendar door near you :). Let me know in the comments if you have any questions about this, or if you have a better rule of thumb or if you want to try out some examples.
Have a great Day and bis morgen.

viel or sehr – The exercise