The German word "Teil" has two genders. Today, we'll find out why and what they mean and we'll go over the most useful compound nouns with Teil. 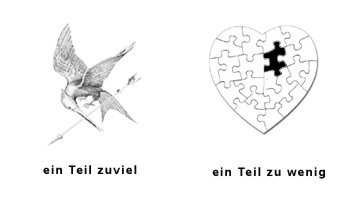 Teil is the German word for part and it is related to the English word deal. Wait, the business deal?  Yeah, that one. A few centuries ago deal was much closer to the original “not as ancient as Indo-European but still freaking ancient”-Proto Germanic root that was all about share, part, amount. And in fact, this notion is still visible today. Just take these phrases:

These are not  not about trade. These are about large parts. The helps solved a substantial part of the problem and a substantial part of the success is thanks to the cast. The business-deal was … uhm… coined some 200 years ago, probably based on the meaning amount, which is not that far from part.
We’ll see even more connections between Teil and deal once  we get to the verbs. But the noun Teil is really really cool and useful and there’s a lot to say about it. Let’s start with the gender. Yeay. That annoying gender that all the nouns have . Well guess what.  Teil is an exception!
Now you’re like “Wow, really. A word without gender? AWESOME!!! That is the start of the revolution!!!” but then you see my face all serious and emphatic and you begin to realize… “It has two genders, doesn’t it?”