Talking about Location – A rough Chart

wie geht’s euch :)? Isn’t the summer amazing this year. At least the German one is.  Those of you who are in Germany will agree – it’s THE BEST autumn impersonation by a summer I have ever seen. Like… if this summer doesn’t win the Oscar for best actor, I’ll… uhm… yeah okay… I’ll do nothing.
Just like this week. Because I got nothing. No article.
“Booooooooooooooooooooooh!!!!”
I know, I know. But seriously,  I was actually super busy the last four weeks – there was a health thing, a relationship thing, my boss is on vacation, I prepared and held two German workshops and I took a few contemporary dance workshops … yes, I actually did. I did write, but I wasn’t able to finish anything to a point where I was content with my … uh content. Wait, content with the content?! Sounds like something German would do :)

Anyways, I didn’t want to let you down completely so I decided to share a little chart or cheat sheet I created for talking about location. Like… which preposition to use with which location. The chart is actually quite old and even though I did some work on it now (like… replacing “Myspace” by “Instagramm” for instance) there are lots of little bits that I’d like to amilliore… erm… make better.

Still, you might find helpful. So here you go… 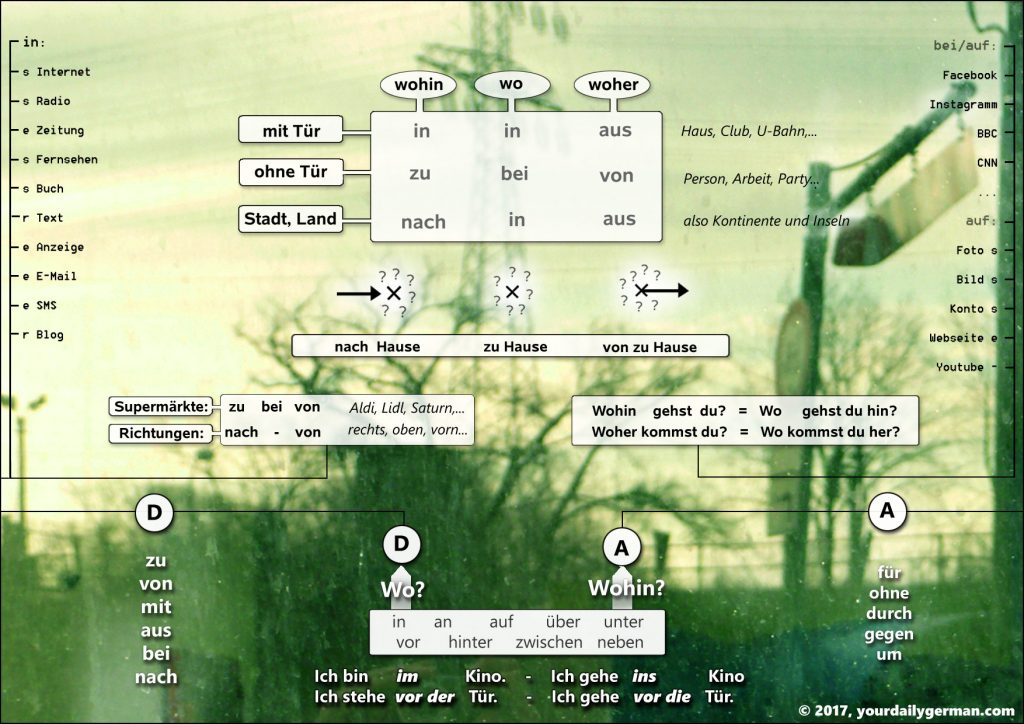 In the center you have a rule of thumb for which preposition set to use with which kind of location. First line is “with door/enterable“, second line “no door, not enterable” and third line is cities and countries. A bit below you have the set for “home”, which is unique and then another two sort of exception sets… for supermarkets (and brand names in general, like Burger King) and directions.  On the left and right side, there are some common nouns and thing and the preposition that you’d use if you think of them as location (like… on Facebook, in the article and so on)
And in the bottom part, there are the most important German prepositions and the case that they go with. D is Dative, A is  accusative and the ones in the center can go with either one depending on what you’re trying to express (fixed location vs. destination).

I really hope you find this helpful as a little guide. And of course if you have questions about this or stuff that’s missing, let’s clear that up in the comment.
I’ll see you next week with a fresh article. Schöne Tage bis dahin :)

Tagged talking about location in german