German Past Tense 3 – “The Written Past” 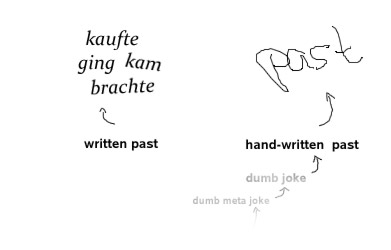 and welcome to another part of the best German language online course ever.
Today (after about 4 god damn years of waiting, for the long-time readers), it is time for a new episode of the epic HBO series called “German Past Tense”. If you haven’t watched the first 29 episodes you can find them here:

Yeah… okay, I’m being silly. Of course, it’s only two episodes so far.
Part 1 was an overview about German Past tense and what we’ll have to learn, part 2 was all about the spoken past and today, in part 3, it is time for a look at:

In grammar jargon, this tense is known under the name preterit. But preterit is not intuitive at all and it sounds a bit scary, so we call it written past. Why written past? Because it’s one of THE main features of written accounts of stuff, while spoken past is what people use in daily life. Like… if Harry Potter were to tell Ron in German what he’s been up to all day on sick leave (sleeping, eating pizza, watching a movie, casting spells), he’d use spoken past.
When J.K. Rowling will narrate the same stuff in “Harry Potter 45 – Harry Potter and the Cursed Lumbago”, she’ll use the written past. When you read a novel in German, you’ll see written past all over the place.

Now, that would be a great system – if German were consistent about it. But it isn’t. German is consistent about pretty much no rule.
There’s a group of verbs for which the written past is also idiomatic in spoken language. For some, you can use both forms, for others the written past is the better choice, and then there are the ones you’ll REALLY love: The ones where the spoken past and the written past are both used, and mean two different things. But before we talk about that, we’ll learn how to build the forms. And for that, we’ll begin with a look at good ol’ English…