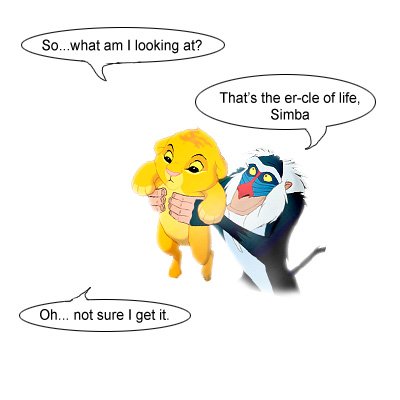 and welcome to our German Word of the Day.
And today, it’s time for the second part of our look at the meaning of the prefix

In the first part, we learned that the core of er- is the broad idea of reaching a goal and it can be about getting something as well as also about reaching a state. We also learned that er- has a bit of an “epic” grand vibe and that er-verbs tend to not bother with mundane day to day grind.
And finally, we found out that er- has actually shot ge- at the yearly Non-Separable Prefixes Christmas dinner. And it wasn’t an accident because to death is also one of the ideas it carries and lends to verbs.
Yeah… if you haven’t read part one, you’re probably hellah confused now :).
So if you want to read it, you can find it here:

So what are we going to do today?
I mean… we know the general theme and we’ve seen how it expresses itself in various of the er-verbs.
But what we don’t know yet, though, is where the prefix actually comes from.
That’s what we’ll explore today.
And that’ll not only reveal some surprising connections and help us make sense of the er-verbs that didn’t really fit in so far (like erziehen or ergeben). It’ll actually offer us a new perspective entirely, and we’ll see what er- REALLY is and how it’s kind of a metaphor for life itself.
So are you ready to jump in?
Then let’s go.