Word of the Day – “streiten” 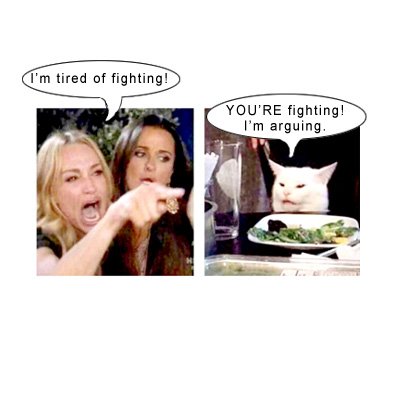 and welcome to our German word of the Day. And today, we’ll take a look at the meaning of

Just by the looks of it, we could think that streiten is the German counterpart for the English word to stride, which is about making long energetic steps. And indeed, the two verbs are closely related.
But looking at the following example, it doesn’t appear likely that they also mean the same.

Although, on second thought… I guess it could be their morning routine. Striding through the kitchen, saying affirmations… “I am very well rested. My spirit is high. My stride is long and determined. I will own this day, achieve my goals and be better than all those non-spiritual loosers. Namaste!”
Maria has some new ideas ever since she got back from that Yoga retreat in Bali.
But okay, of course the example is NOT about striding around in the kitchen. It’s about a different kind of morning routine, one that Thomas and Maria have been doing daily, ever since home-office season started…. arguing.


The origin of streiten and stride is most likely the aggravatingly ancient Indo-European root *(s)ter-. The core of this root was an idea of stiff, rigid and it’s the origin of a whole bunch of words like stark, stare or starch.
This root also evolved into a Germanic group of verbs that revolved around a theme of making an effort, resisting, stiffening the muscles and in many Germanic languages this soon took a turn toward fighting.
English stride is kind of the exception here, with the sense of making long energetic steps, but there is effort and flexed muscles in that, as well, and it can be a part of fighting.

But yeah, as society slowly got more and more civilized and placid , so did the word streiten and today, it is NOT about actual combat-style fighting anymore. The word for that is kämpfen. Which is a really weird twist of a meaning, by the way, because kämpfen is originally based on the Latin word campus. Like… the army camp. If you’re a gamer, you’ll appreciate the irony #nocamping.

But anyway, the original fighting sense of streiten is still visible in weapon names like die Streitaxt (the battle ax) or der Streitwagen (the war chariot), but the verb streiten itself is a mix of to argue and to fight.
And it’s quite handy, I think, because in English you always need context to gauge the intensities. Like… arguing with anger or without anger. Fighting with words or with fists.
Streiten is right in the middle… so it’s always somewhat heated and personal, but never physical. Maybe it’s a bit like the difference between fighting “with” someone, as opposed to fighting “against” someone.
Basically, just think of couples who are stuck in home office.

Awesome.
Now, looking at the sich in the example you’re probably like “OMG, so streiten is reflexive?”
But the answer to that is actually.. up to you.
You CAN use it with a self reference, but it also works without it. I personally feel like it sounds a little more stiff and formal without it, so I’d prefer to use it, but it’s not a big deal if you forget it and you can take it out of the examples without changing them.

And while we’re at usage, let’s also mention the prepositions real quick. The person (or cat) you’re arguing with is connected with mit, so that’s like in English. And the topic of contention can be connected with über or um. I feel like people use them interchangeably to an extend, but um has a notion of ownership or some more direct involvement. So the second example with über would sound like we’re maybe arguing whether she gets to eat fish or not, while with um it can also mean that we both want the fish and we were arguing about who gets it.
An argument I won of course, with my superior human size. That’s right, dumb cat! I paid for that salmon. Get a job or shut up and eat your dry pellets.

Anyway, the noun for streiten is der Streit, which is basically right between an argument and a fight.

And there are several other related words, and phrasings that you’ll see sooner or later.

But please don’t think you need to memorize all these. They’re not that important and you’ll definitely understand them from context.
Cool.
Now, the (un)umstritten in the last example might have struck some of you as a form of a prefix version. And indeed it originally is. And while umstreiten as a full verb  doesn’t exist any more, other prefix versions do.

First up, we have sich zerstreiten and I’m sure you can already guess the meaning – it’s about arguing with the result of a real falling out or separation. Oh and yes, in this case we MUST use the self reference.

Next up, we have abstreiten which literally is like “argue off“. And that makes perfect sense as to deny in the sense of denying allegations.

And this is also the idea of bestreiten, which sounds maybe a tiny little bit less definite…

… but bestreiten has a second meaning: prevailing in some sort of life struggle or challenge. It’s impossible to put one translation on it, and it’s actually also hard to use because it’s only idiomatic in a bunch of select contexts, the most common one being finances.

Seriously… do not try to ever use bestreiten freely in a sentence. I can almost guarantee you that it won’t be idiomatic.
I just wanted to mention it as an example for the older meaning of streiten shining through.
And an even better one is the word Mitstreiter. Because that’s explicitly NOT a person you want to argue or fight with :)

Seriously… I need all the help I can get there. It’s crust-level dirty, so yeah… I visualize help. I made my move, Law of Attraction. It’s your turn now, Universe! Do your duty and manifest cleaning buddies.
“That’s not how the law of attraction works, Emanuel.”
Oh really. Well, Sir Madame Universe, FYI, The law of attraction works however I want it to work! I make reality the way I want it to be.
“Oh, we’ll see about that.”
Damn right, we’ll see about that. Just wait till tomorrow morning when I do my powerful kitchen stride affirmations. That’ll bend you into submission.
“Have fun striding in your filthy kitchen, Emanuel.”
Yeah, whatever…  I don’t have time to streiten with you now. I have a show to wrap up.
And in fact, I’ll do that right now, because we’re done here for today :).
This was our little look at the meaning of streiten, and we actually got a live example for it just now :)
As always, if you want to check how much you remember, just take the little quiz I have prepared for you.
And of course, if you have any questions or suggestions, just leave me a comment.
I hope you liked it and see you next time.

streiten = to argue, to fight (implies actual dispute and anger, but no physical component)
der Streit = the argument, the fight, the dispute (NOT physical fight)
der Kampf = the fight (physical or mental fight against someone or something)
kämpfen = to fight (not in a sense of arguing)
abstreiten = to deny (allegations)
der Mitstreiter = the compatriot, the companion (not too common)
bestreiten = to deny (allegations); to partake in some sort of competition (not too commonly used)
umstritten = disputed
strittig = disputed
unumstritten = undisputed
zerstreiten (sich) = to have a falling out (long lasting)
Streit suchen = to look for trouble
streitlustig = confrontational, looking for trouble
schlichten = to mediate (for heated arguments and disputes)