"stehen auf" is a pretty common colloquial phrasing in German. Today, we'll learn what it means and how to use it properly to express liking. 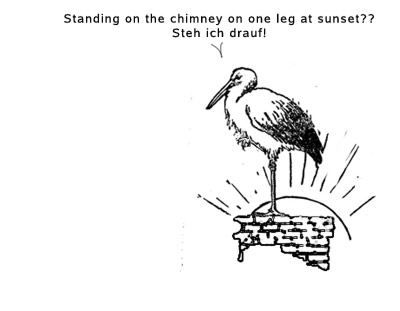 and welcome to another episode of Spoken German Bits – the series where we look at all the stuff that people use in real life but that you won’t find in the standard textbook and teaching materials.
“So basically the cool stuff?”
Yeah, the cool stuff :).
Today, we’ll learn a really fly phrase that I’d bet my butt you’ll want to use right away. Ladies and gents, get ready for:

Stehen aufhas a normal day job as to stand/be on (top of), be it in the turbo literal sense of location or for some more figurative uses like writing “on” a paper or sometimes for some sort of settings.

So what’s so rad about it? Well, stehen auf is a super mega common informal way to express liking. Yes, another one. Besides mögenand gern and gefallen. Who would have thought that the dour Germans have so many words for liking :).
So, auf etwas/jemanden stehen is a quite casual, informal way to express that you like something or someone.
It’s pretty similar to mögen but it doesn’t work so well for serious emotions. And I feel like stehen auf sounds a little more greedy, or lusty at times. Like… you wanna have it. You don’t just appreciate it for what it is. But hey… I know we all stehen auf examples, so let’s do some :).

And of course it also works with the da-word, d(a)rauf.

And it also works for people.

And in that context it’s usually about THAT liking. You can say the following to your crush, but not to your best friend… well, except if you have a crush on your best friend.

Now, those of you who are currently in the “case phase” (the phase when you worry about getting the cases right and try to make sense of all of them”) might be wondering “Wait, why dich and not dir.” A very good question that brings us to the secret of how to make everyone stehen auf you.
Nah kidding, I mean this:

The grammar of stehen auf

The Dative covers the literal, location related meaning; the Accusative is used for the abstract combo of verb and preposition. And I can imagine that’s quite confusing for learners. But luckily it makes sense… or we can make it make sense. Get ready for some mind bending:
Liking does have some overlap with wanting. And wanting something or someone has a fair bit of direction in it. You have a goal, and even if just on a very abstract level, you’re “moving” toward it. And stehen aufwith Accusative kind of captures this “directed” mind.

He wants her, he desires her, his mind is bent on her, his soul is directed toward her. Damn Steve, that’s creepy… no wonder she thought about getting a restraining order.
But seriously, we can think of this Accusative as capturing the “directed-ness”, that is part of wanting and liking.
And if that doesn’t make sense to you, then I got another option, which is also a theory as to where stehen auf actually comes from. There’s a similar phrasing to stehen auf: fliegen auf. It means the same but I think it’s a bit older and definitely somewhat out of fashion today. What’s cool about it is that the Accusative makes perfect sense there because fliegen is a directed movement, and that is connected with Accusative.
Just think of a flock of seagulls darting down on an open bag of potato chips someone left at the beach. They “fly on top of it” because they dig that stuff.
This fliegen auf might have inspired stehen auf and people just kept the case.
Wow, that was a lot of case talk :).
Let’s wrap this up then with something lighter… a word play. There’s a woman who has written a book about how to get healthy and strong feet. And now guess what it’s title could be….

(so just mark it to read it, or click the link)

German humor… just gotta steh auf it.
Sometimes. When you can actually find some.
Anyway, that’s it for today. This was our look at the phrase stehen auf, which is a colloquial way to express liking. And which is SUPER MEGA COMMON.
What about you? Have you heard this phrasing in daily life? Do you use it? Were you confused by it at first? And what do you stehen auf? Leave a comment with your example and see if you used it correctly. And of course if you have any questions about any of this, let’s clear that up in the comments, too.
I’m out for now. I hope you had fun.
Bis nächstes Mal.