A quick look at the various uses of "der Stamm" in German and the mysteries meanings of "Stammtisch" and "Stammbar". 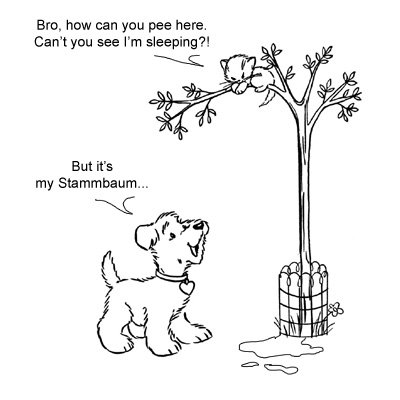 and welcome to our German Word of the Day. Today, with a look at the meaning and the family of

It’s the German brother of the English stem and many of you have probably seen it in context of language and grammar. But that’s also the most boringest context.
There’s much more to discover about the German Stamm and its related words, including a really really handy German use for the … but I’m not gonna spoil it.
So, are you ready to learn some words? Then let’s jump right in.

The origin of Stamm is the presentably ancient Indo-European root *sta- , which might very well be the biggest root ever. Seriously,  the core idea of it was standing, be firm and the amount of words that come from it is much longer and more diverse than the list with reasons why Parasite was a good movie. Seriously… I hated it. If that gets an Oscar, Niko’s Weg should get one, too
Anyway, there’s of course obvious stuff like to stand or steady but there are loads of words you wouldn’t expect, like Afghanistan, cost, system, staff or institute, and they’re all basically variations over the theme of standing. And since it was our topic just last week… the sta-family is a perfect showcase of how marbled with prefix verbs European languages really are.  To cost for example,  actually used to be constare in Latin. This is also where constant is from and the literal meaning of that was “to stand at/with” and one context was for weighing scales standing still because they’re in balance. Which was a common way to measure value back then.

Anyways, so der Stamm , die Stämme in plural (note it, you’ll need it in the quiz), belongs to this family and it stayed rather close to the core idea because the original meaning of Stamm like stand, thing something stands on. One of the oldest uses is for the “stand” of a tree, the trunk.

but already very early on people used it in a more figurative sense for an idea of base and so today, we have words like Stammzelle (stem cell) or Stammhirn (brain stem) and Stammbaum (family tree). Oh and der Stamm is also the German word for tribe.

And now we get to the really handy use I promised in the beginning.
Because it has this notion of base, tribe, people started using Stamm in the context of going somewhere regularly.
A Stammbar for instance is the bar you usually go to.

You might be like “Oh, it’s like favorite bar.”, and yes, favorite is also a fitting translation. But keep in mind that the focus of Stamm- is on the regularity. It’d be weird calling a place Stammbar if you only go there twice a year. And a Stammkunde or Stammgast for instance are words for regular customers, but that doesn’t mean that they’re the staffs favorite.

Now, a bar is not the only thing you can be a regular at. Many people also have a Stammcafé and technically, you can also have a Stammsupermarkt (supermarket you always go to) or… I don’t know…  a Stammgeldautomat (go to ATM), but those aren’t really used that much. This whole Stamm-thing does imply that there’s actually people there who know you.
There is another word that we need to mention, though, because it’s a really really typical German thing… the Stammtisch.
If you’ve ever been in a hotel that has a pool and lots of Germans, of you might think “Oh it’s like the thing Germans do with their towels and beach chairs.”
If you don’t know what that is… Germans have a reputation of getting up extra early to put their towel on one of the beach chairs to kind of claim it, and then they go back to the hotel to brush their teeth, have breakfast and maybe even take a nap and come back like three hours later. Brits apperantly also do that, and recently rich Russians have joined the game by bribing the hotel staff to place the claiming towel during the night so Germans now find themselves between two fronts… again.
Anyway, where were we… uh yeah,  Stammtisch. So Stammtisch has nothing to do with blocking a table. You can have your “regular” table at your Stammbar, but that would be called Stammplatz.
The Stammtisch is actually more like a tradition. It’s a bunch of friends meeting regularly for drinks, (usually beers). Often, it’s the same bar, but the venue isn’t that important. What matters is that the “tribe” sits at a table, drinks beers and talks life, sports and politics. The translation REALLY depends on context so let’s just look at some examples.

To me personally, the word Stammtisch sounds a bit old-fashioned. Like… it’s a boomer thing, for dads with dad buds and beer bellies, not for pretentious avant-garde woke millenial hipsters like myse… wait, what the… hey, to whatever intern who wrote the script for this section… I’m NOT woke, okay?! I am waking! That’s the REAL shit. Woke is steady, stagnant. Waking is fluid, like life.
Anyways…  the whole concept of a Stammtisch is kind of a part of German culture, and definitely a word to know.
Cool.
So that’s pretty much the noun der Stamm.
But before we wrap up, let’s take a quick look at the related verbs, and there are essentially two: stammen and stemmen.
Stammen and its prefix version abstammen tie in with the whole family aspect because they express the idea of origin.
Stammen is usually used for geographic origin or in context of who created something. The prefix version abstammen is ALWAYS about a biological origin.

Stemmen on the other hand has nothing to do with that. It means something along the lines of  to push (up) against something heavy.

It’s not very common, but what’s cool about it is that it is the key to a word many German leaners are wondering about – I’m talking of course about Verkehrssystemmanagement, which means the manag… okay, I’ll actually stop this here, because I get lost in the nonsense again :).
This was our look at the meaning of Stamm and the handy German words Stammbar and Stammtisch.
As usualy, if you want to check how much you remember, you can take the little quiz I have prepared for you.
And of course if you have any questions or suggestions, just leave me a comment.
I hope you liked it and see you next time.

der Stammtisch – regular meet up among friends with beers

stämmig – bulky, sturdy (for looks of a person)