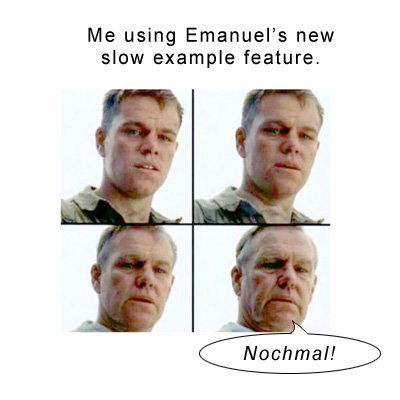 I have gotten a lot more solid with coding over the last year and I discovered that it’s actually not all that difficult to implement a slow motion feature.
Maybe you know it from Youtube. You can adjust the playback speed there. Which it is a pretty funny feature, by the way, because many people sounds drunk if you slow them down. Wanna have some laughs, then watch a speech of a politician of your choice on .75 – it’s hilarious.

For some reason, I don’t really get that drunk-vibe when I slow down my own speaking. But you can check that out for yourself, because the new feature I added lets you slow down ANY audio on the site.
Note that the feature is ONLY accessible if you have an account, so either you have an active membership or you used to have one in the past.

The switch is on the bottom right and here’s how it looks: 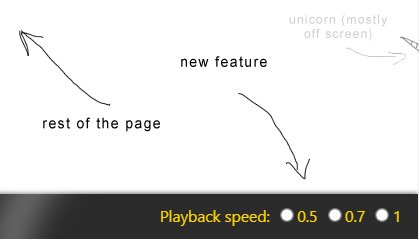 And here’s a random audio, so you can try it :)

Can you understand what I am saying :)?
Now, the tool does NOT save the settings at the moment, so if you open a new page, it’ll be back to one, but it’s really just one click or tap to switch back and forth.
The slowing down itself is actually done by the browser (most modern browsers have it), so it’s not high end audio processing. But at least at .7 it still sounds fairly natural.

So yeah… I really hope this is helpful for you. Let me know what you think and if I should change the speed options.
Have a great day and just so you know… it was NOT the last episode of A New Feature, so stay tuned :)