German Surprise of the Day 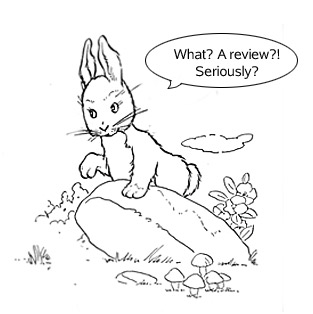 and welcome. Today I don’t have a word for you… but I have a nice little surprise. But first, I really gotta say … Rosetta Stone is awesome and really worth the money. Now you’re probably like “What’s going on Emanuel, are you a sell out now?” but no… I just really think Rosetta Stone is amazing. And if you can’t afford it, then that’s your fault. Just can afford it next time! Really. It’s better than sex. All the those other programs and websites… I don’t even know why they exist. In fact, there are even new ones coming out.
Just a few days ago someone sent me an e-mail and told me about their language learning website. They’re about to launch the German learning version and he asked me if I want to introduce it to you. Of course I was like “Dude, don’t you know there’s Rosetta Stone?” but he was like “I know, I know… but I really believe in our idea. And we’ll pay you tons of money ” and I was like “Uh… how many tons are we talking about.” :)
Okay seriously .. I’m in general pretty skeptical about new methods or software or websites… I don’t like new things. But I checked out the site and I actually liked it quite a bit.
And I think many of you might like it too, so I’ve decided to introduce it you guys and see what you think.

So… the name is FluentU.

It started out as a website for learning Chinese, and it has been around for a few years already, so it’s not completely new and they definitely do know what they’re doing. Now they are expanding and want to make more languages available, among them German.

Language learners always yearn for real world input. Well… the web is full with real world input. Problem is… real world input is also really difficult because people speak fast and they mumble. So unless you’re already somewhat advanced, watching a random German Youtube video is not that all that much fun.
And that’s where FluentU comes in. They take real world video content from the web (mostly youtube) … stuff like Movie trailers or cooking recipes or beauty tips or news or whatever… and they add German subtitles. Not some shitty speech recognition subtitles, but real subtitles, done by people who understand the language.
But there’s more. The subtitles are under the video and if you hover over a word, the video automatically stops and a little info box pops up that gives you the English translation(s) as well as some grammar information. And it doesn’t only work word by word. It also works phrase by phrase so you won’t miss out n idiomatic expressions. Here’s screenshot: 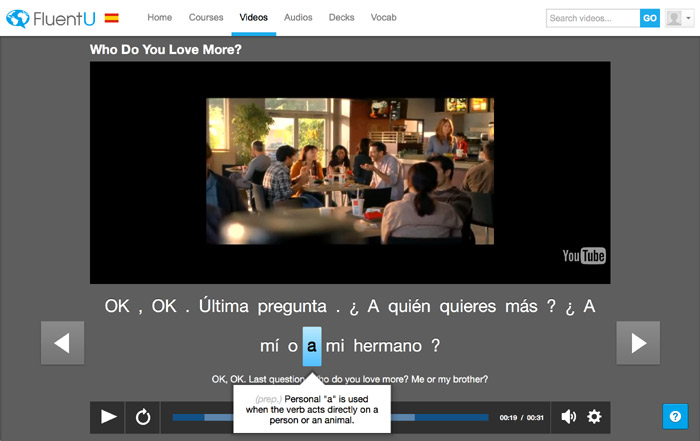 And there’s more. After you’ve watched a video you can click “learn” and learn the vocabulary from the video with examples. They even do little quizzes with snippets from the video.All the words you have learned go into your vocabulary list and the website helps you study them with the “spaced repetition” method.
And there are still more little cool features that can help you with your studies. You can find short video that describes it on their website.

What do I think of FluentU

As I said, I actually really like it. The video is really stops without delay when you hover over the caption box so it really only plays when you want it to and the translations… well, as far as I can tell they are really doing an amazing job.
In one video, there was a lonely mit at the end of a longer sentence and I was like… haha… let’s see if they get it right. And they did. The whole verb was highlighted and translated. Not just the prefix. And then, there was a video called “Kochen mit Thomas Müller”,  and when I hovered over the name, the “translation”  said that he is a soccer player in the world cup.
That’s really great and shows that the translations are done by real people… not algorithms.
All the other features are neat too, but what I really like is the idea. I watched a receipt for cupcakes in French … made by a French person for French people… and it made all the difference to have the subtitles and translations right there.
You know… sometimes you get about 70% of what people say but you feel like you get nothing.
The only small complaint I had was that the videos were all pretty short (4 minutes max) but that’s totally understandable. They’re really only starting German and translating a video does take some time, if it’s done like they do it. They definitely want to have longer videos later on.
So… all in all… I would really really really recommend you check it out when they launch it in August.
Now you’re like “Pfff… August… so long. I want to check it out now.”
And the good news is… you can.

As I said, they’re in beta stage still so they’re still working on it. And they need feedback from learners like you. That’s why they’re offering a limited amount of  free beta accounts to some of you… right now.
Yeaaaay.
And although there aren’t hours over hours of content yet, but they’re adding more than 2 per DAY and the Chinese version has more than 1300 videos… so quite some material.
So … if you’re interested, you’d really like to try out and you’re willing to give some feedback, then

Wow, you guys are crazy  :D…   we’re already way past the number we had planned, so I’m really really sorry but for now it’s a stop. Tut mir echt super leid!!
Maybe, just maybe we can do a new round tomorrow but I’ll have to talk to the guys over at FluentU first.
But of course, if you  want to see how it works you can just sign up for French, Spanish, English or Chinese … only takes a minute and just your E-mail. Here’s the link again.

There, you can also sign up for their newsletter so you wont miss the official launch of the German site (probably August).

So this was my little review of FluentU. I really think it’s a cool idea and I would love to hear what you think so leave me a comment with …uhm… what you think.

Oh and just in case there is some doubt about what  I REALLY think of Rosetta Stone… well… she’s just a gold digger;)

Oh and last but not least… TAUSEND DANK to the people who donated. You rock!!