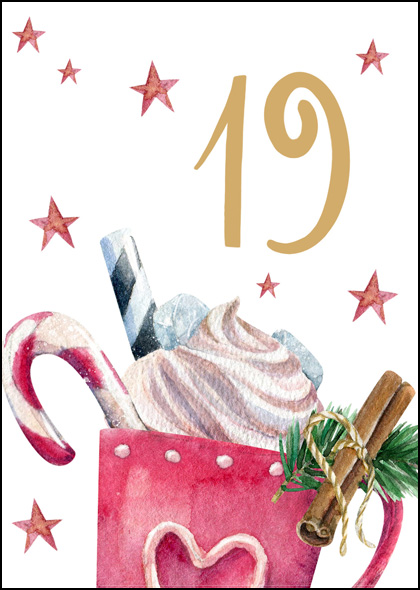 and welcome to the final stretch of the epic German Learning Calendar, door number 19.
And today, it’s time to get a little active, because behind the cryptic title that sounds like a name of a dwarf in a fantasy novel is actually a little quiz about one of the burning questions about German:

Yeah… it’s so burning, many of you didn’t even have it :).
But you actually do have it, because it’s actually a common thing in spoken German and also a common mistake.
And I don’t want to talk about grammar today, or what’s a prefix and and what’s a da-word and what’s an adverb. It gets quite messy and none of this really matters, at least not for speaking properly.

What we’re trying today is to build some intuition for these things, because that’ll help us much more with sounding idiomatic than a bunch of rules.

So… many of you probably remember this from one or the other article here: German tends to be quite “explicit” when it comes to expressing location and spatial relations.
And one example is that German really likes to mark whether something has the role of a fixed location or of a destination. Or in other words, whether it answers to “at what place” or “to what place”.
This is for instance the core of using the two way prepositions, and it also shows up as a trend for how r-versions and dr-versions are used.

Let’s do an example with a cat and table

Both these examples are spoken German, the second one would also work without “drunter” and it’s not even clear what drunter is in the second example… is it a da-word? Is it a prefix? Or is it just an adverb?
I think I am leaning toward the last option, but it really doesn’t matter for us because it is super theoretical.
What’s clear and intuitive is that in the first example we’re dealing with a destination the cat is jumping toward (down). And in the second example, we’re dealing with a steady location where the cat is currently… ah…  residing.

And this kind of thinking is ALL you need for today’s quiz.
Please, again… I know your brain is getting a little anxious about what grammar it is looking at and what rules there are. And that’s fine. Your brain is doing its job.
But for this exercise, please just ignore it because we’ll try and let our intuition and common sense guide us.

I’ll give you a few examples and German and English and  you’ll have to decide whether you need the r-version or the dr-version or if both make sense.
As you’ll see, the pairs are sometimes looking a little different. So there’s rauf and drauf, but rein and drin (not “drein”).

But yeah… try really to only focus on whether we’re talking about a fixed location or a destination.
7 questions in total… so, let’s jump right in!!

And? How did you do :)?
Let me know in the comments how you did and if you think you could build a bit of a “feel” for this stuff.
And of course you can also leave ALL the questions that might have come to your mind while reading and doing this. I’ll try my best to answer them all.
I hope you enjoyed this, have a great day, and I’ll see you tomorrow.

Oh and don’t forget to vote in the poll for the open day, if you haven’t yet. Here it is again. And yes, you can vote again if you want to, but please don’t: