Conditional in German 4 – The Past

We'll learn a step by step guide on how to build the past of the conditional (subjunctive) and see why it is really really important to forget about English. 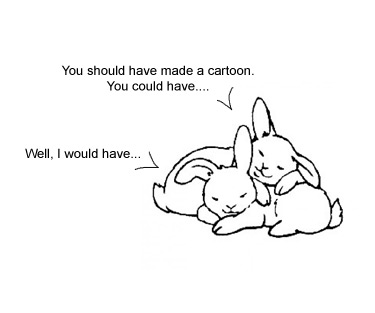 and welcome back to the forth part of our mini series on the Conditional in German. And this time, we’ll look at the stuff everybody is struggling with.

Past Conditional is what you need when you want to talk about how the past could have been, but wasn’t. So in practical terms that means today, we’ll finally talk about how to say stuff like would have been, would have had or would have had to have been in German. Which is something EVERYBODY is making mistakes with. Even thosenative speakers that always walk around with their nose up like they’re fluent or something #callingoutnatives.
Seriously though, building the Past Conditional itself is actually quite straight forward. But there’s something weird going on with the word order at time.
“But Emanuel, there’s ALWAYS something weird going on with the word order in German.”
Well yeah, I guess. But take the weird-ness you’re used to and then twist that. It is kind of messed up, actually.
But Past Conditional is super useful and you absolutely need it if you really want to express yourself, so let’s buckle up and jump righ… oh wait, I guess, I should give you the links to the first three parts real quick, so you can read up on that if you haven’t. Part one is an overview over the topic and the terminology and also we learn how to build the würde-conditional. Part two is about how to build and when to use the real conditional and part three is an epic exercise for that stuff.


How to build it – Basics

We’ve learned that for the non-past conditional there are two versions for each verb, and the choice which one to pick depends on what’s idiomatic for that verb (or the verb in context).
The Past Conditional is more straight forward because there is only one version. Hooray!
Here’s my four step guide on how to build it.

Step 1:
Find the actual verb is and then ignore the wording in English.
You absolutely MUST build it from scratch in German.

Step 2:
Take the verb (action) in German and build the Spoken Past of it.

Step 3: Replace the helper verb of the spoken past with its real conditional form.

Step 4: Feel like a boss, because you’re crushing it at German

Step four is actually kind of optional and you will be understood without it. But it feels REALLY good.
Anyway, let’s go over it together. Here’s our sentence.

Did your zealous head just pull out a würde? Then stop right now. We really need to follow the guide, even if you think you know better.
So, Step one is to identify the actual verb. Here, it is to say. Yes, there’s also would and have in there but those are just helping, the action we’re talking about is saying something. Cool, so now we need to ignore the English sentence completely.
Actually, let’s just build a basic sentence with that. You don’t have to do that every time, but it’s a step that can be very helpful whenever you have a longer sentence and you’re getting confused.

Of course, this doesn’t mean the same as the original. But has the same elements, except that we’re not using Past Conditional.
Now, for step 2, let’s take that and put it into spoken past.

And step 3 says, we need to replace the helper verb with its real conditional form.

And that is it. We’ve built our first real conditional together. Time for step four

Ah, so good.
Let’s do another one, this time with a verb that uses sein for the spoken past.

What’s the actual verb? Exactly, kommen. So the most basic sentence with the same elements would be

Now the same in spoken past:

And now we’ll replace the helper (bin) with its real conditional form.

And boom. Done!!! Easy.
And it’s exactly the same for those infamous Avaté-sentences. That’s short for “all-verbs-at-the-énd”. Their real name is subordinate clause, but Avaté sounds much cooler. And more spiritual. Like, it’s a Yoga style. Namastayyy, beautiful beings, I am so sooo happy we’re about to share this Avate-Yoga session with one another. Here’s our first pose, please join along and follow my steps.

What’s the verb here? Exactly – to call. So the most basic Avate-form of this sentence would be this

Now let’s put that into spoken past.

Yeah… as you can hear, I integrated step 4 in the audio already.
Anyway, let’s do one more together…

Phew, this already starts to look scary, but if we just stick to the system, we’ll be fine.

Tadah!! The only thing that’s probably a little confusing is that verbrennen builds its spoken past with sein. Like…. what the hell?
But you have to remember… the main point for the use of sein is not that there’s movement. The main point is that something or someone changes their location or state. Like, from raw to burned.
Anyway, so that’s the basic system.
Let’s look at a few practamples®… that’s basically examples that are also a practice. Just try to express the English version in German.

1.
If Maria had seen that, she would have laughed.
Wenn Maria das gesehen hätte, hätte sie gelacht.
2.
If Thomas had talked to me, I would have fallen asleep.
Wenn Thomas mit mir geredet hätte, wäre ich eingeschlafen.
3.
If my alarm had rang, I wouldn’t have slept so long.
Wenn mein Wecker geklingelt hätte, hätte ich nicht so lange geschlafen.
4.
Without you my bad mood wouldn’t have gone away.
Ohne dich wäre meine schlechte Laune nicht weggegangen.
5.
If I had known that the exam is so difficult, I would have prepared myself better.
Wenn ich gewusst hätte, dass die Prüfung so schwer ist, hätte ich mich besser vorbereitet.

If you messed up with the word order, don’t worry too much. That’s normal. What matters most is that you have the right forms. Or that you understand why I am using the forms I am using.
Cool… so now that we know the basic system, let’s start looking at the trickier stuff.

Where it gets tricky

Doesn’t look very complicated and yet, many learners get stuck when they try to say it in German. And even with our three step system it is a bit… tricky.
The reason for that is the verb sein. More precisely, the fact that we’re used to using the written past (preterit) for sein. You see, the second step was to make the sentence in “normal” past tense; so without a Conditional. In case of sein, we’d naturally do it this way:

And that’s perfectly idiomatic, but … for building the Past Conditional, it is a dead end. We MUST use the Spoken Past. And yes, it does exist. Here’s it is:

You might have never seen this, it’s not very idiomatic, but it does exist. And for the Past Conditional it is super mega uber turbo helpful, because now, all we have to do is replace the helper verb (ist) with its Real Conditional form and we’re flippin’ done.

And that’s it. That is would have been. No need to fiddle around with würde and haben and then abort the mission because our sentence is already a disaster. All we had to do, was follow our step by step guide. That’s the challenge here, actually.
To REALLY, blindly follow the steps. What were the steps again? Well, here are the ones that actually matter:

And if it says “build spoken past” we’ll do that. Like a dumb computer pretty much. Like… Alexa, use spoken past of sein!
“I’m sorry, but Spoken Past is not an official grammatical term. If you are referring to the Perfekt, then I must inform you that it is not idio…”
Aw, screw that. Stupid AI. Thinks it’s so smart.
“Your new order for Disney Princess underwear is being shipped, Ema…. “
SHUT UP!!! That is nobody’s business. And… it’s … a present.
Anyways… where were we… oh yeah… so sein is of course not the only verb for which we’re not used to building the spoken past. So let’s look at a couple more examples.

Tadah. I know, it’s not the most intuitive, but it’s straight forward and it works.
And it also works for the Avaté-sentences…

Unless you’re a C1-fluency machine, a sentence like this one probably makes you feel confused. Like… where to start? Where to end?With what verb? In what form?
But if we stick with the steps, it’s not a problem at all.

Now some of you might be like
“Emanuel, what if there’s another verb with the modal verb… like what if the unicorn would have wanted to do it that way?”
Well, that is exactly, where things get really messy. And that’s what we’ll talk about in the next part of the series, called:

But of course we’re not gonna wrap up this one without a quick second round of Practamples ®… this time, with some modals and stuff in there. They do look scary, I know, but if you just follow the steps, you’ll get them right. Seriously… the main reason people get it wrong is that they just try building Past Conditional without following a system, when they’re actually not ready for that yet. You need to slow down, guys :).
Of course, you can’t follow a step by step guide in conversation. It’s just a way to get used to how the structures sound and feel in German, forget about English and get a sense of “I’m smart enough for that stuff.”. The rest comes with practice.
Anyway, so let’s do this. Viel Erfolg :)

6.
If I had known that, I would have been on time.
Wenn ich das gewusst hätte, wäre ich pünktlich gewesen.
7.
If I had had a driver’s license I would have rented a car.
Wenn ich einen Führerschein gehabt hätte, hätte ich ein Auto gemietet.
8.
If Thomas had forgotten their anniversary, Maria would have been very disappointed.
Wenn Thomas ihren Jahrestag vergessen hätte, wäre Maria sehr enttäuscht gewesen.
9.
Thomas would have eaten meat, if Maria hadn’t said no.
Thomas hätte Fleisch gegessen, wenn Maria nicht nein gesagt hätte.
10.
If the soup had been really hot, it would have been even better.
Wenn die Suppe richtig heiß gewesen wäre, wäre sie noch besser gewesen.
11.
I would have done it, if I had had enough time.
Ich hätte es gemacht, wenn ich genug Zeit gehabt hätte.
12.
I would have had a nice evening, if I hadn’t gone to the opera.
Ich hätte einen schönen Abend gehabt, wenn ich nicht in die Oper gegangen wäre.

And, how was it? Did the system work for you? If not, where did you make mistakes? Let me know in the comments below how you did and how many you got right. And of course, if you have any questions about any of this let’s talk about it in the comments.
Have a great week and see you next time.

Do you want to read on? Then click right here to get to the next part right away:

Ps.: Apologies for the weak audio. The noise filter setting I used this time weren’t the best :/.