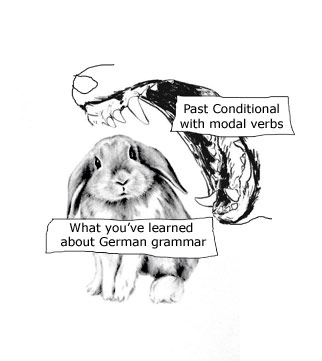 After discovering the frightening and sobering truth about the normal Conditional in German, the learner knew … he had to travel back in time and face the past of the Conditional.
To his surprise, he found it wasn’t as scary as he had expected. There was only one version and everything was quite straight forward.
“That all you got, German? Pathetic!! You should have made it more difficult.”
“Oh yeah?! Well, why don’t you say that in German then?”
“No probl… oh…. oh my god….”
That was when the learner’s world started to fall apart…. dun dunn dunnnn.


Welcome back everybody to the fifth episode of our mini series on the Conditional, and if you found the intro confusing… well, perfect. Then you’re warmed up for today’s topic:

In the last episode, we looked at the basic system for building the Past Conditional and we learned how to say stuff like would have gone or would have read.
If you haven’t read the first part about Past Conditional or you don’t really remember, please check that out first. Here’s the link:

Today, we’ll talk about the cluster… erm… clusterlovemaking that happens when doing past conditional for modal verbs with normal verbs combined. Like… saying something like this:
“I could have done it.”
or this:
“… that I could have done it.”
Doesn’t look very complicated, right?
Well, get ready to see a couple of core beliefs about German grammar fly out the window. And the first one is…. the ge-form.

Oh, the good old ge-form. It sure took a while, but now we are used to it and it comes out automatically. So naturally, dick that it is, German will now ask you to stop using it. For the FREAKING SPOKEN PAST.
Yeah, sounds like a bad joke, but it isn’t.
Let’s take a look.

To get the spoken past of this, we do what we usually do: put in the right helper verb (here haben) and put the ge-form of the verb (here: wollen) at the end.

So far, nothing new.
But now take this, very very similar sentence.

Using logic, the spoken past of that should be this:

But no. This is wrong. The correct version is this:

No ge-form anymore. Let’s do another one.

But nope! The correct version is this:

To make the spoken past of a modal verb that has a regular verb attached,
you use the infinitive of the modal instead of the ge-form.

I know, I know, nerds, I know there’s something about modal verbs really only being modal verbs when they come with another verb, otherwise they’re regular verbs but hey… no one really understands that stuff and no one cares. The rule is confusing enough as it is, no need for a distinction between modal-modals and normal-modals.
Let’s just look at it in action again. Behold….

Great rule, great rule. Thanks, German.
Now a lot of you are probably scratching their heads now wondering why. Well, I’m doing the same thing. I don’t really know.
I have a theory that it might have at least a little bit to do with rhythm. If you’ve read my article on the Spoken Past, you might remember that we looked at the ge- as a rhythmical element. It adds an unstressed syllable in front of the stem of the verb and that extra beat is a big part of signaling past to a native speaker.

Now, when we look at the combo of normal verb – modal verb in a row, we actually kind of get the same pattern.

Whereas with the ge-form there, we’d just add an extra syllable.

And that would kind of ruin the flow. German is all about flow, remember? Strumpf, Wurst, Frostschutz… that’s some serious flow right there.
Okay seriously, I don’t know if there is ANY truth to my rhythm theory or if even makes any sense. But that’s literally all I have. So if anyone of you happens to know something … please tell us in the comments.

Anyway… so yeah, this is our new rule. And if you’re wondering why you haven’t heard about it until now… well, that’s simply because you didn’t really need it up to now. Because modal verbs usually use the written past, not the spoken past.
And you probably already know where this is going :).

Past Conditional with modals

We DO use the spoken past as a stepping stone to build the Past Conditional.
And guess what… now with the new shitty rule we just learned, we can actually use the EXACT SAME system we learned last time.
So basically replacing the helper verb of the spoken past with its real conditional form and then feel like the savage alpha learner that we are.
Let’s give it a go. Here’s the sentence we want to say in German.

Gee… this is tough stuff. But with our system, it’s easy. Let’s start with the most basic present tense sentence, just so it’s crystal clear. This wasn’t an explicit part of our system but it’s helpful whenever you get confused about the word order.

Now, we’ll take the spoken past of that using our new awesome rule…. so without the ge-form.

And now, all we have to do is to replace the helper verb with its real conditional form.

And that’s already it! Pretty easy, right?
Let’s do another one.

Tadah!
Oh and just in case you’re confused why there’s no wäre even though we have kommen… you have to note that the verb is können. NOT kommen. Kommen is basically like an object to können here and it remains untouched of all the verb shuffling we’re doing.
But yeah… you see, the system we learned last time actually works perfectly.
Let’s do one more….

If you’re not sure what’s more confusing, the grammar or the content, then let me tell you… the content. I mean… what the hell? Everyone knows unicorns could care less about closing wormholes. So unrealistic.
The grammar is pretty simple. The only real challenge is to realize that the verb is actually…. müssen. To have to. Once we’re aware of that, we can just use our system.

Boom. Done.
Now it’s your turn?
“What?! But I’m not ready yet…”
You’re never ready! Just give it a try ;). The main thing is that you get the verb forms right. The order is secondary. But if you have a würde in your sentence, it’s REALLY confusing to a native speaker.

1.
Thomas could have cleaned the kitchen.
Thomas hätte die Küche putzen können.
2.
I shouldn’t have called my boss a princess.
Ich hätte meinen Chef nicht Prinzessin nennen sollen
3.
The beer would have had to be colder to be tasty.
Das Bier hätte kälter sein müssen, um lecker zu sein.

All right.
Now, so far we’ve only discussed “normal” sentences. But we all know that German also has these sentences with ALL the verbs at the end.
And to get those right in Past Conditional, we have to say good bye with another core belief about German… the verb at the end.

Verb at the end… NOT

So yeah, German has these sentences that has ALL the verbs at the end. So the verb that used to be in position 2 kind of queues up at the end like it is in a super market or something.
Here’s a couple of examples…

It sure took us a while, but now where used to them and the verb at the end thing comes automatically. So what’s German gonna do now? Exactly… pull a new rule out of its behind that makes us NOT put it at the end anymore. Or at least shuffle it up a bit.
Here’s what I am talking about.
Suppose we want to say this

We have a dass-sentence so it’s one of those that has ALL verbs at the end. And because it would be impossible to build that right away, we’ll go step by step and start with a “normal” sentence.

For the average language learner, this is super scary but we’re all conditional veterans now. This is a piece of cake.

Now we need to make that into a dass-sentence. So normally we’d put dass in front of it and move the verb that was in position number 2 to the end.

But this is WRONG!!
The correct version is this:

Instead of going to the very end, the helper verb goes in front of all the other verbs that are at the end…. the beginning of the end, if you will.
Let’s do another example…

The normal sentence (without the dass) would look like this:

And that’s it. Tadah… that’s our new additional rule for word order. And it is completely pointless. Seriously… I have NO idea what’s behind this. All it does is complicate things. I mean… it’s not super complicated on paper. But building this in conversation is a challenge, even for native speakers.That’s right… native speakers do mess up here sometimes.

Both version are something a native speaker might say and the first one sounds fine actually (those of you who have read my series about word order might know why). The second one sounds quite bad though, and yet sometimes native speakers do say this, simply because their brain wasn’t fast enough. So you as a learner have NO reason to beat yourself up, if this takes you a while or you’re making mistakes.
Cool.
Let’s do one more example to recap what we learned today.
Here’s what we want to say…

Wow, even more verbs :). But we have all we need in our tool box. First, let’s build a normal present tense sentence. Without dass and conditional.

1. Ich will heute joggen gehen. (normal version, no dass, no past, no conditional)


Now, we build the spoken past of that and as we learned today, we DON’T use a ge-form.


Now, we replace the helper verb with its real conditional form to get the Past Conditional


And now we put that into the “all verbs at the end”-form using the new crappy position rule.

And that’s it. Now you know all you need to build the Past Conditional. And I urge you… please take a moment now to feel like a boss. Because you really are one. 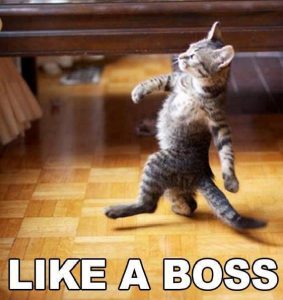 Now, of course this was only the theory. What you need now is practice.
And that’s why next time, we will do a HUGE work out just for the Past Conditional. And then we’ll probably do a kind of Conditional Q&A to clear up all open questions.
But yeah, for today that’s it. As always, if you have any question… what?… oh… oh you want to do an exercise now? Okay, fine… I’ll give you three sentences to chew on :). If you really go step by step by step as we’ve done it together, they shouldn’t be a problem. I mean… not like you can just say it off the page. But you CAN BUILD IT.
Let me know in the comments if my explanation made sense and if you have any questions about any of this. I’ll try to clear it up (or add it to the Q&A list). Hope you guys enjoyed it, have a great week and bis nächstes Mal.

4.
If Maria had wanted to, she could have come to the party.
Wenn Maria gewollt hätte, hätte sie zur Party kommen können.
5.
If Maria had wanted to come to the party, she could have come.
Wenn Maria zur Party hätte kommen wollen, hätte sie kommen können.
6.
If I had really wanted to spend the evening at home alone, I would have had to turn off my cell phone.
Wenn ich den Abend wirklich allein zu Hause hätte verbringen wollen, hätte ich mein Handy ausmachen müssen.
5 7 votes
Article Rating