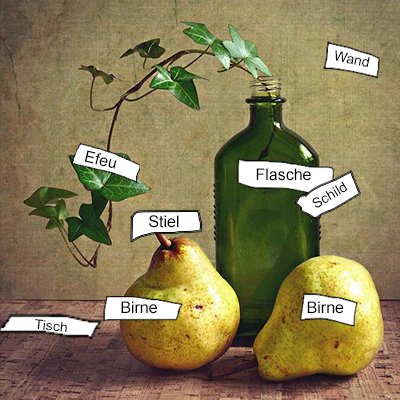 and welcome to the second episode of our Grammay special. In this special, we go over the common grammar terms and look at what they actually stand for, where that comes from and we’ll also ask ourselves the question if we really need the stuff the particular term stands for. Like… do we really need grammatical gender, for instance? I’m sure most of you are thinking the same thing. And you might be right. But we won’t find out today, because before we look at gender, we’ll look at the thing that actually has the gender. So today, we’ll take a quick look at

The term noun comes from the Latin word nomen, and I’m sure many of you can guess which other word comes from that root … it is the word name.
In Latin, nomen meant both things, name and noun, and we can actually find noun in the more general sense of “naming things” in a few English verbs like to announce or to pronounce. And even though the term noun itself slowly shifted toward being a fancy grammar term, it didn’t change in its essence, because all that nouns are is basically just names people gave to objects and concepts within their reality.

“Yo fellow cavemen, what are are you drinking?”
“Don’t know… but everyone asks that, so I’ll call it what are.”
“Ahhhhh… nice. I’ll have some what are, too. “

And so the noun water was born.

Nah, I am kidding of course, but there’s a bit of truth to that insofar as that nouns usually are not completely random names. So there’s a reason why people chose it. The noun beer for instance is most likely related to beverage and comes from the Latin verb for to drink.
But yeah, nouns basically represent the various “things” in our reality. So they’re essentially the counterpart to verbs in our language universe.
If you’ve read the article on verbs, you’ll probably remember that analogy – the universe is made up of energy and mass and we can find this duality reflected in languages. The verbs are names for action or energy. And the nouns, together with actual real names for people, are the names for mass.

Now, generally it is a good thing in life to at least sometimes ask yourself if your way of perceiving reality, your way of looking at the world is the only way (spoiler: it’s not). Not through a lens of what’s right or wrong or which way is better, but simply in a sense of what options there are. And this is especially helpful when learning a language, and that’s why, even though nouns seem to be such a basic building block of language, I think it’s worth asking ourselves the question… do we need them.

Do we need nouns?

And I think that nouns might actually be the one aspect of language that is the hardest to get rid of.
In the article on verbs (link below), I mentioned that there are languages where making a distinction between what’s a noun and what’s a verb is impossible. And we’ve seen examples of how the line is blurry also in English.

Here, we’ve used verbs to fill the role of an entity.
So, for most languages it is practical to have a dictionary category called “noun”, but technically we wouldn’t need that.
The real question is if we need the “functionality” of nouns. Like… can we communicate about our reality without naming any of the stuff in it.
That would mean that we’d have to refer to any thing or being based on how it is and what it does.
And while that might be possible in theory, just like we can refer to all mass by the energy stored in it, I think in practice, it is really really really difficult.
Like… it’s so difficult that I find it actually hard to come up with an example.

I’m sure some of you understood that but it is BY FAR not as clear as the same situation expressed in a languages without verbs.

I can even strip all the clutter, and it still kind of works…

The thing is, our perception of reality is heavily biased toward “mass”, toward objects. Like… look around you. If you had to write down all you see you’d notice loads of names for things (nouns) and very few names for actions (verbs).
Take a stone in the desert.
From the perspective of the universe, that’s not really a thing. It is just a dust cloud that expands and disappears, so looks more like “energy”. But for us, many things around us are somewhat static, including our bodies, and when we want to talk about reality, we refer to all these “goal posts” first. We use them to build a scene and in this then some “verb” takes center stage.
That’s why skipping the verb works in many sentences. The objects we’re naming give enough context to guess what’s going on. But the reverse is REALLY hard. We’d have to perceive the world in terms of energy, and we’re not really built for that.
So bottom line… while in theory it may be possible to only talk in terms of states and processes, in practice we’re kind of hardwired to have them, because that’s how we perceive the world.

And you know what’s funny… ironically, it makes a lot of sense to NOT focus on learning nouns, especially in the beginning. Why not? Well, first of all, there’s just a crazy amount of nouns. Think about a kitchen for a second. If you had to write down kitchen nouns, you’d come up with a long list of items, but if you have to write down kitchen verbs, chances are you won’t get more than a dozen without some serious pondering (unless you’re into cooking of course).
So, there are way too many nouns to chose from, and also, you can point at a lot of them.
Why would you spend your time in A1 learning the German names for body parts if you can spend that time learning abstract verbs and words that help you coordinate stuff in your sentences. That’s the second reason, why you shouldn’t focus on nouns, and the third one is that many of the more abstract nouns that you cannot point at are …. based on verbs.
Just think of all these words with -ung, -keit, -heit and so on. If you spend your time learning verbs, you get at least as many nouns fo’ free.

Well, at least in terms of meaning. Because in many languages, nouns come with a certain characteristic that makes them a little annoying. And German is one of them.

The German terms for noun are either das Nomen, which is based on Latin, or das Substantiv. That one of course also comes from Latin and it’s based on the phrase verbum substantivum, which once meant “word for substance” – nice tie in with the mass-metaphor.
Me personally, I like Substantiv much better and I actually find das Nomen to be a little smug and elitist. And I get immediately bored when I hear it. Can’t tell you why, though, it’s just a feeling :).
In terms of functions, German nouns have two special characteristics. The first one is of course their gender.
In German, nouns get to pick between three genders and while most have just one, German also has vivid transgender noun community. So some nouns have two genders, each of which with a different meaning – like der Schild (defensive shield) and das Schild (information sign).
And some nouns have different genders depending on the region that you’re in – like die Cola in Berlin and das Cola in Bavaria (which is wrong of course, but they don’t know any better). Also, some nouns change their gender over time. I don’t have an example right now, but there are nouns that used to be strict der two hundred years ago, that are noun das.
And last but not least, let’s point out that the grammatical gender has very little to do with the noun. So something might be masculine in German and feminine in Spanish. And to make it REALLY confusing, there are nouns like das Mädchen, which is a neuter, but which stands for a girl.

Now, German isn’t the only language with gender and it’s not the only one that has three of them.
But there is one thing that makes German nouns REALLY unique worldwide… and that is the fact that they’re ALL capitalized.
That’s right, not just the names. ALL of them.
So an english Sentence with german Spellingrules would look like the Sentence you are reading right this Moment.
Ewww… that’s… actually quite weird when I see it in English :).
Capitalizing nouns was kind of a trend that slowly caught on not only in German, but also in Danish for instance. And while most countries reformed it away sooner or later, the Germans LOVE their uppercase nouns and decided to keep it.
And I have to say… I really like it, because it structures the sentence and makes it much easier to parse. Like, you can see right away which word are objects and you can ignore them and look for the verbs first because those are more important.
As with anything that requires effort, there’s a trend to not capitalize nouns in chat and colloquial emails. Heck, there’s even a portion of designers that think it is “cool” and modern to write everything in lower case.
But at least to me, a german Sentence without uppercase Nouns looks about as shitty as an english Sentence with capitalized Nouns. So I’d recommend you put in the effort.
And don’t you “Okay boomer.” me now :). I’m a millennial, and age has nothing to do with that. I was pro uppercase already in kindergarden. Up-cay or out of the way, as we used to say… oh man… so cringe.

Anyway, I think that’s about enough for today.
This was our (not so) quick look at what nouns are. I know this wasn’t really news to anyone, but I hope you got a few nice takeaways from it and had a good time. I definitely did writing it :).
As always, if you have any questions or suggestions, just leave me a comment.
Have a great week and I’ll see you soon with the look at … genduh!
Bye.

What is a verb