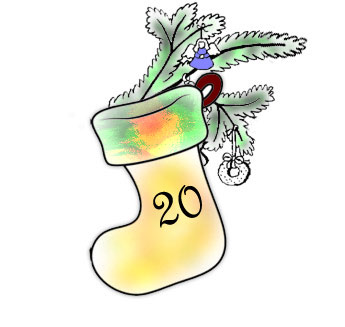 day 20 of our German advent calendar and today, it’s time for something many of you have been waiting for:

Or Lis-Comp for short :).
But I’m not gonna blabber something myself. Instead, I have a really nice recommendation for you.
It’s a Youtube channel called:

And I am not 100% sure but I think the channel actually used to be called Ich heiße Sherin. Either that, or she started a new channel, but it’s definitely her.

In each video, she reads a self written short story. Often it’s about her life, sometimes about general topics and it’s always very relatable and often give a nice little inside into normal life in Germany.
She reads slowly and clearly and she has a great  voice. And what’s REALLY important in my opinion: the audio quality is AMAZING.
For the video portion, she does nice little illustrations for and of course there are German subtitles. And for her Patreon supporters, she also offers a pdf-transcript.
And her stuff is just PERFECT for you if you’re a late A2 or a B1 and you want to train your listening or even do a … dictation exercise. Yeah…ewwww… I know. Dictation is like the “leg day” of German learning. No one likes it but it gives you HUGE gains.

But anyway… below, you’ll find one of her videos as an example. I really really like what she is doing and her channel is absolutely underrated, under-subscribed, under-viewed and under-patreon-suported.
So if you like the video, then head over to Youtube and give her a thumbs-up… and then ten more thumbs-up on other videos. She definitely deserves it.

Let me know in the comments how you like it and if you knew her channel before.
I’ll see you guys tomorrow, and now have fun with the video