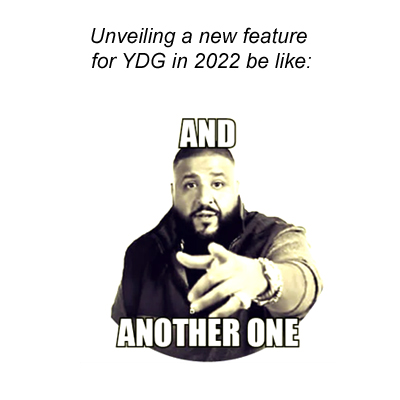 so as the title already says, I am looking for some people as beta testers, because yes… I have a new feature called:

Literally.
Because you can now pick favorites in the dictionary.

Most of you are probably familiar with my dictionary at this point. If you don’t know what I mean… that’s basically what you see when you use the search function of the site. There’s over 9.000 entries in there at this point and I am slowly building out the meaning, definitions, examples and family relations.

The goal is actually to have my own vocabulary trainer, and the first step toward that is now finished, because you can now mark your own favorites.
So you can create your own personalized vocabulary selection that you can quickly check and review any time.
And that’s not all, actually… .

And the first thing that makes my system kind of special is the fact that it is NOT centered around words, but around what I call meanings.
Well, actually, I usually call it “ideas” when I think about this stuff but I think meanings might be more intuitive here.

“Meanings” rather than words

One of the challenges of language learning is that words, especially verbs, tends to have more than one meaning and a meaning can itself have multiple possible translations.
Just take the German verb vorstellen which can mean

And while some meanings might be really common, another one might be kind of useless. Or it’s only used in writing or something.

That’s why I have decided that instead of marking words as favorites, it makes more sense to mark meanings as favorites.
So for vorstellen, you could only mark to introduce and to imagine and ignore the last one, because it’s kind of useless.

Doesn’t seem like a big deal, maybe, but trust me… it is. At least in the future once I have expended this into an actual vocabulary trainer...muahahahahahahahahahah.
And it also makes a BIG difference for the other cool functionality… taking notes.

Adding your own notes

If you’ve used my dictionary, you’ll probably have seen that I’m trying to give important usage notes for each of the meanings. Sometimes, it’s grammar, sometimes it’s a context when NOT to use it and sometimes it’s just info about tone.
Anyway, for the favorites, you can actually now and your own notes. Isn’t that awesome?!
So you can note down something that helps YOU remember the meaning.
And yes, it’s not one note for the entire word, but you can add a notes for each meaning separately.
I think that’s pretty cool and no one else really has that :).

So… that’s the new feature in a nutshell, and now it’s time to check out some screenshots of how it actually looks in practice.

Once the favorite feature is live, you’ll see a little heart beside each of the separate meanings in the dictionary.
Want to add a meaning to favorites – just click the little heart and it’s done :)
Here’s how an entry looks in the search results of the dictionary. 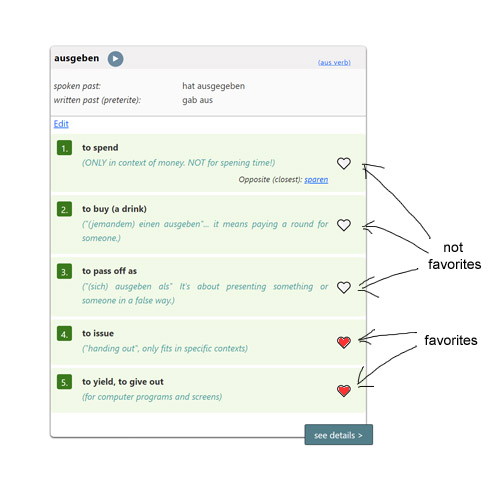 And here’s the same for the detailed entry view: 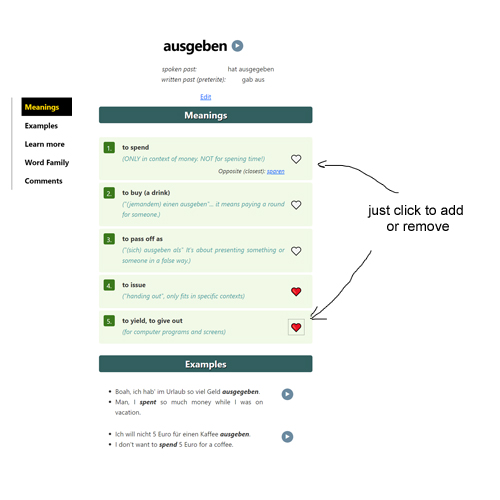 So that’s one part of it, but the most important thing is of course the place where you can see ALL your favorites together.
And that’ll look something like this: 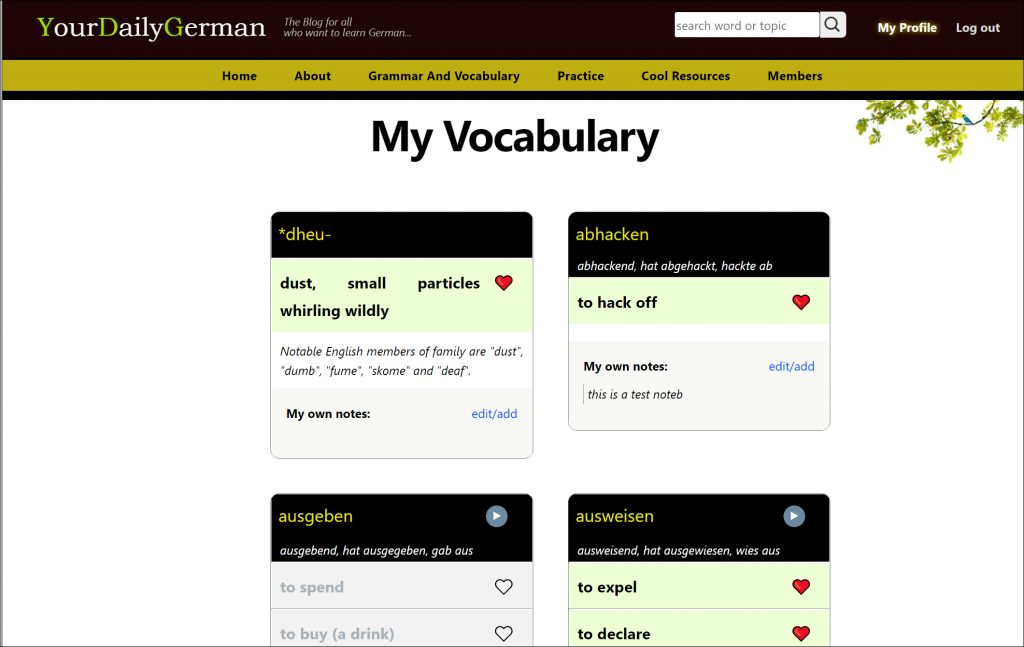 And here’s a closer look at how to add your notes: 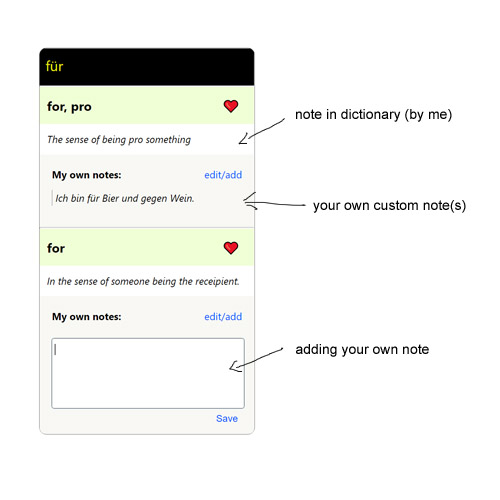 And here’s one with a word that has multiple meanings: 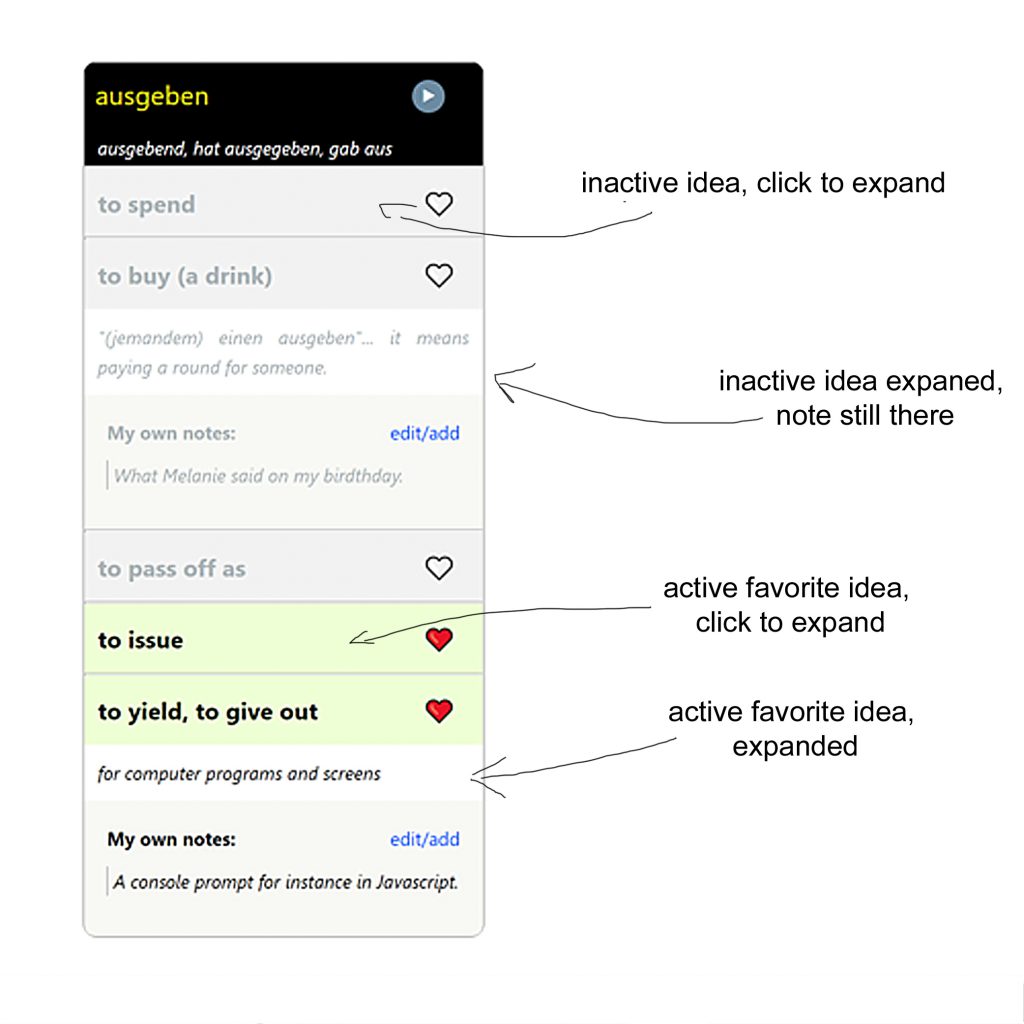 As you can see, even ideas that are not your favorites are still displayed and notes you might have added at some point are still visible.
The reason is that most of you would probably want to know how many meanings a words has, and also which ones, without having to look it up again.

The real purpose of these “favorites” is actually “meanings I am actively practicing“, and it’ll be relevant later once I have expanded this into a vocabulary trainer… *cue evil laugh.
Seriously though, if you’re confused… don’t worry.  It’s not that important right now, but it’s a fundamental database design decision that’ll allow a lot of functions that wouldn’t really be possible if you “just” favorited the entire word. Like adding individual notes to each of the meanings.

Now, this is by no means complete and there are a few things that I want to implement fairly soon:

Now, so far, it has worked well when I tested it, but it’s kind of a big piece of software and we made everything ourselves, including the database design.
So before rolling it out to all the members, I want to make sure it’s runs smoothly and I’d also like to see of there’s any big pain points with the usage.
And that’s why I am looking for a few beta testers.

If you don’t know what beta testers are… that’s the word for people who use software before it is completely ready.
And I’m looking for 5-7 of you who want to try out the feature and give me some feedback on how it works, what you like, what you don’t like, what functionality you’d like to have and of course if there are any bugs.

I only have two requirements:

The feature is only for members, so you need to have an active membership. And because you’ll be writing notes, I’d prefer if you have at least 3 months of membership left.
Oh… and members with a sponsored membership are of course normal members, too, so feel free too apply!

2.  You need to be an active user of the dictionary

For the testing, I’d prefer people who already use the dictionary regularly to look up vocabulary. If you only use it occasionally, the chance that you run into a bug or an annoying little usage problem are much lower than if you use the dictionary all the time. So yeah… some of you are using the dictionary a lot, and I’d love to have you as beta testers for this feature, too :)

If you’re interested in testing this out and playing around and you fulfill the two criteria above… just leave me a comment below and I’ll get back to you soon.

And even if you don’t want to be a beta tester, I’d love to hear what you think about the feature and if you’d use it once it’s out.
So yeah, leave a comment with your thoughts and questions below :).
Thanks a lot in advance, have a great week and I’ll see you next time.

Oh… and just to make sure, please note:

You CANNOT access or see any of this on the site yet. It is only displayed to me at the moment and the beta testers soon ;)