(noun)
based on: Stoß Stößel

1.
the dasher, the stamper
(Kitchen utensil, used for cocktails mainly) 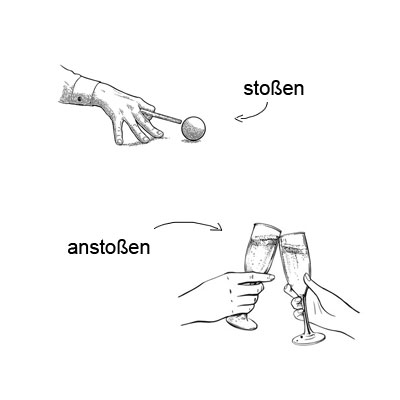 The core idea of the root was:

The closest to the original are German words like stoßen (quick blunt push) or stupsen (to nudge) but there family has branches out in various directions.

One branch of the family is about stuffing things inside somewhere. That’s where we find words like stopfen (to stuff inside) or der Stoff (the stuff, the material, the fabric). A variation of the theme of stuffing is the theme of “closing an opening by stuffing something in”. That’s where the verb to stop ties in.

Another branch is about the idea of fragments, so bit is more focused on the result of hitting something.
This branch is where we find words like der Stock (“the stick”), das Stück (“the piece”) and step- as in stepbrother.

And there are several other little branches with words lik type, stupid or to study (see below for more info).

I should note that English etymologists are not certain about the connection of stuff in particular.