1.
can be tolerated
(Mostly used for food, hygienic products and medicine.) 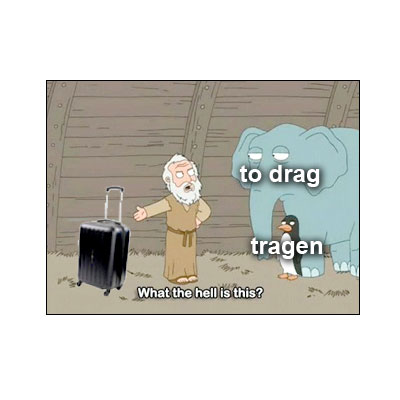 dragging (across a surface)

In German, it eventually changed to the idea of carrying (tragen). In English, it stayed closer to the original in the words to drag and to draw, the latter having focused on the pulling.

It is possible that the Latin trahere (to pull, to draw) also has ties to this root. Etymologists find it likely, but they don’t have enough evidence to call it “certain”.
trahere is the origin of a whole boatload of words:

Also likely but not 100 certain is a connection to the Germanic branch around trek, track and trigger.

Last but not least, etymologists speculate that also the verb trinken/to drink might belong to this family, with an original sense of “drawing into your mouth”. Think of someone drinking from a river, for example.