Word of the Day – “warten prefixed”

A fun look at the "warten" and its prefix versions. We'll learn about the two(!!) meanings of "warten" and see how they tie in with expectations. 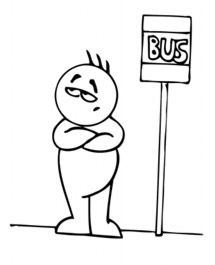 and welcome to our German Word of the Day. And today, we’ll do a prefix special on

What’s a prefix special, you ask?
Well, in a prefix special we take one German verb, look at its meanings and then add all prefixes possible and look at those meanings too. For warten that won’t be that hard because there are only 4. That is nothing compared with gehen where you can add quite literally relatively close to 1652 different prefixes… (yeah… pilin’ up them adverbs).. but before I start being stupid again let’s dive right in and start with the warten itself in all its beauty – pure, untarnished, utterly seraphic and just timeless… warten.

Warten , wartēn in Old German, has been around for quite a while but as so many other words it used to mean something different… something along the lines of to direct ones gaze at something or more simple to look at something. This goes back to the really really old Indo-European root u̯er(e)-.
The meaning of this root is really vague and different sources tell mention different things but it was something like to pay respect or heed. or something. Anyway, you can find children of this root all over Europe and in English those relatives are the words warn, ward, guard to an extend beware and finally also wart.
Wait waaaaarrrrrt? Yes, wart has the same root which as a noun could also mean “some place that is higher then the surroundings from where you can see well“… yep, word history is really weird sometimes :).

Anyway, you might have noticed that to wait as the number one translation of warten was NOT among the related words. That was a surprise for me too but to wait has a different origin and originally comes from an old North French word waitier which meant to wait with hostile intentions or to lurk. If you look back further you wind up with the Indo-European root u̯eg̑- … which expressed the idea of well rested, fit and strong. This root is also the base for the words to wake and to watch so to wait is related to those. And by the way… this still shows in to wait as in to wait tables. I was always wondering why it’s called waitress but now I … it is actually a “watchress”... and how did a famous German painter say almost 100 years ago:

What a poet.
Anyway, so warten and to wait are actually not related.
What’s interesting though is that both words kind of made the same career. To wait lost the hostile intention over time and finally pushed away the old English word to bide which used to be used as to wait. Just as its old German brother bītan. But then came warten and changed from to direct ones gaze at something into a more abstract looking forward and then lost the positive notion…. what remains was to wait and soon the old bītan had disappeared.

But enough with the history, let’s get to the meaning and this is no news: warten means to wait, and this is a pretty one-to-one translation I would say.

The preposition that goes with warten is auf and the case you need is accusative.

Hmmm…. auf … that probably means that there are examples with darauf too.

Other than that the grammar of warten is really soft. The spoken past of warten is build with haben and the written past is regular.

What most of you probably didn’t know yet is that warten has a second meaning… to maintain or to service. Seems random at first but once we remember warten used to mean something like to gaze at this makes sense... in order to maintain something you need to take a look at it.
This meaning is definitely not that important in daily life so we’ll be really brief with this.

However, there are a few words that you might see in Germany with the maintain-warten in them.

And here’s a fairly common expression with warten.

All right. So… this is warten and now on to the prefixes… yeahhhhhh.

The er– prefix. Oh my. In the post on aufwachen I mentioned that er often makes things sound less mundane, even a bit divine if you will. While this works for many verbs, it doesn’t really work here. I’ll do a post on er as a prefix anyway. So, let me just tell you flat out that erwarten can mean to expect and to await. Expecting definitely has some warten in it so that isn’t too much of a stretch and to await is quite obvious. Let’s start with to expect.

As you can see, erwarten and to expect are quite similar and are often used in the same situations. But there are some minor differences that deserve being mentioned. First of, I think erwarten sounds a little bit more demanding…. mainly due to the fact that erwarten doesn’t work very well with assumptions. So erwarten is NOT a good translations for expect in sense think.

When said the wrong way, this could sound like you’re ordering the person to be hungry… like… “If you come to my place I expect you to be hungry… so be hungry now! Be it!”
For those think-assume-expects you should go with annehmen or davon ausgehen…

Another difference between erwarten and expect has to do with the direct object.

Those are kind of 2 different meanings… one is demanding and one is just waiting… and only the second exists in that same form in German.

If you add a direct object to erwarten, that always expresses that you await that object. So the following sentence is nonsense:

“Ich erwarte dich” means “I await you”.
So if you expect someone to do something, THIS is how to say it in German:

And just to make sure… you can cannot use a zu-construction. A few more examples:

Now, sometimes people add a mir to their phrase but that doesn’t really change much. It makes it sound a little less demanding maybe.

All right. Now here are one example with to await:

There are some words based on erwarten that are pretty useful. The first one is die Erwartung which is… as expected I may say… the expectation.

Then, there is the word unerwartet which means… unexpected(ly).

Another useful word is erwartungsgemäß… yeah, pretty long but useful non the less. Depending on context there are a number of similar translations in English but the essence is best captured with as expected.

There is also the phrase wie erwartet, which is similar in meaning but it sounds more casual and is what people would probably say.

And last but not least there is erwartungsvoll which literally means full of expectations and which has a really nice vibe to it. If you expect negative things you wouldn’t call that erwartungsvoll. So the better translation is possibly in happy anticipation.

If you’re confused at the forms of the verbs I used here… it is real past and I used it because this sentence just sounds like a novel.
All right… and that’s it for erwarten, now onto the last warten… well almost.

Abwarten is a little tricky because it also translates to to wait for the most part. But there is a clear difference between warten and abwarten and seldom may they be interchanged.
The thing is warten is just pure waiting…. waiting for stuff that hasn’t happened yet. Abwarten looks like waiting but it is actually more of not doing something till the situation changes… maybe the situation sucks.

Or maybe you simply can’t decide what to do yet so you have to wait for more information.

Both examples could work with just warten, too I suppose but it doesn’t sound so good to me. Abwarten is kind of being on stand by. Let’s look at some examples to clarify this:

So, abwarten can take a direct object but it then means that you wait for this to be over or passed or completed.

This tells the listener to wait a bit because you are not done yet. Maybe your friend is already leaving the bar and you haven’t even payed yet.

Here, you are not asking for the person to really wait for you, but rather wait for whatever is going to happen before jumping to conclusions.

All right. I hope that you could wrap your mind around the difference between warten and abwarten a bit. There are no words based on abwarten but there is one nice idiom:

The translation I found is:

But that could actually also just be the translation or abwarten. The Tee trinken adds an extra emphasis on “chill, no need to be active right now”. So if anyone knows of some similar idiom in English or any other language for that matter… go ahead and share it with us :).
All right… no onto the last word.

Hope that helps… ok, seriously though… Leo suggest as a translation to come up with, the translations of Dict.cc are pretty much wrong and Pons offers to serve, to come up with and to offer… but all this is really misleading. Aufwarten is not something you need in every day talk and for all who are interested anyway…here it is in real life action at Linguee.com … the best match there is actually to provide.

Anyway…. we’re done for today. This was our German Word of the Day Prefix special on warten and I really ho… wait… we have a call… gotta check with Nick if we have time for that… Nick is nodding… so…, Oleg from Poland,hi Oleg, welcome to the show….
“Hey Emanuel, great to talk to you and nice show today. However, I have to say that I am a bit disappointed.”
Oh but why…
“You call that a prefix special?”
Uh, yes…
“But it had only 3 prefixes in it.”
Uh… yeah, warten can only take those 3 er, ab and auf…
“3 is nothing… we want more…”
But… I thought you guys would be glad it’s only 3…
“It’s fine… but not for a prefix special… don’t spare us! Give us the real stuff man, we can handle it…”
Oh… so… uh… what do you want me to do…
“Do all prefixes of gehen!”
In one post… uh ..I mean show? NEVER!!
“Then do stellen.”
NO WAY, that would take a whole freaking book!
“How about geben.”
Hmmm… but don’t complain, if it ends up loooooong.
“Haha… I won’t, I promise…”
All right, so geben it is for the next prefix special…
“Awesome, Emanuel… I can’t wait… hey, uh… what would that be in German actually?”
Oh… you mean, you can’t wait?
“Yep.“
That would be:

Doesn’t really tie in with what I told you about erwarten but hey… there are always exceptions,right?
“Hahahah…. true, thanks and bye”
Thank you too, and greetings to Poland. All right, and we’re done here for today. If you have any question or suggestions just leave me a comment. I hope you liked it and see you next time.