Word of the Day – “trennen”

"trennen" is the German word for "to separate". In this article, we'll explore how to use it idiomatically and explore its various relatives. 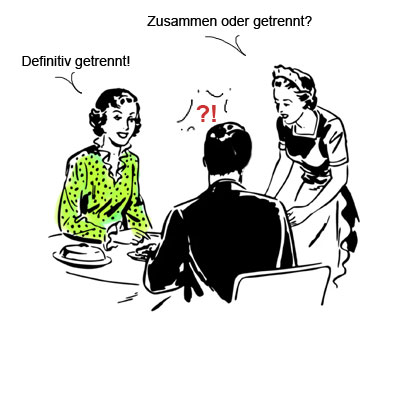 and welcome to our German Word of the Day.
This time, we’ll take a look at the meaning of

And most if not all of you know this from the infamous German “trennbare Präfixverben”… which sounds incredibly German, by the way.
No wonder Rammstein has made a song about them…

Anyways, so yeah… trennbar is separable and so trennen, or trennen (von) to be precise, of course means to separate (from).

And it can also express the idea of parting or letting go or splitting up. Then, it’s used with a self reference in Accusative – sich trennen.

So you kind of literally “separate yourself“.
Pretty intuitive so far, I’d say. And the direct relatives don’t need much explaining either.

If you’re wondering about the last two examples… unzertrennlich is ONLY used on the context of personal relationships. That can be two people, or just one person and a pet or even a beloved object, but unzertrennlich does imply an emotional bond.

Cool.
So trennen and to separate seem to line up pretty well overall.
But there is one difference between them and that has to do with force.

You see, the verb to separate comes from a Latin verb that essentially meant something like to make, just like to prepare and to repair by the way. So to separate basically means “to make apart” or and there’s no implied “force”. That’s why to separate can also be used in contexts that are merely about making a distinction, which is basically about “setting apart”.

In contexts like these, the better choice in German is unterscheiden.

trennen is not really wrong, and definitely understandable, but especially in the second example, it sounds odd, because trennen DOES imply somewhat of a force.
Like… there is a sense of severing a connection.
And that makes perfect sense once you know the English relative of trennen… which is to tear.

The family of “trennen”

The origin of the family is the mind-numbingly ancient Indo-European root *der-.  The core idea of this root was “flaying, tearing off” and it’s not only the origin of tear and trennen, but also of words like epidermis or dermatologist, which come from derma  – the old Greek word for skin and leather….

Uh… yeah, great, thanks Eminem.
For real though… pulling the skin off of animals was an integral part of life for many hunter gatherers, so the connection makes a lot of sense.

Anyway, trennen has gradually shifted toward the result of tearing and became about splitting and separation.
But it’s not the only German word in that family.
One of them is zerren which is basically rather forceful continued pulling.

Now, even though it sounds somewhat similar, it’s not really a good match with to tear.  Reißen, which is more sudden than zerren, is usually the better match because it implies destruction, while zerren is more about the motion.
But at least if you do sports and you don’t warm up properly, you have a good chance of doing some zerren sooner or later.

And you’ll most certainly see verzerren in some context, which is in essence about “pulling” something out of shape.

Another member of the family that you might see sooner or later is der Zorn, which means anger. Like… very similar to English torn when you think about it, just that you channel the suffering into anger. Or actually, let’s call it wrath, because it sounds a bit more momentous than die Wut.

Another word that might be related (though that is not entirely sure) is zart, which is German for tender.
And weirdly enough the word tender does itself come from a root that is about pulling and is connected to tendon and tension.
Just think of pulled pork, if you need a mental connection.

And that brings us right over to the weirdest member of the family… the verb zehren.
Because zehren means something like… to feed on, to consume nutrition.
The verb itself is SUPER rare and you pretty much only see it in a few fairly fixed figurative phrasings…

But what you might hear is the verb verzehren, which is an overly technical term for eating and drinking.

And what you will definitely see sooner or later, at least if you’re in German and you read signs and labels, is the noun der Verzehr, which is the consumption of food and drinks. And German doesn’t really have another option for that, at least not one that covers both eating AND drinking.

And now the big question is of course… what does that have to do with any of the other words?
Well… just think of the tender pulled pork again, where you tear apart the meat to make it easier to eat. Or think of someone eating chicken wings… they’re literally tearing the meat from the bone.
Gee, that sounds quite savage actually.
But yeah… back a few thousand years, that was the normal way of eating and that’s how zehren got its meaning.

And I’m not sure if I feel hungry right now or not, but either way, that’s it for today :)
This was our look at the meaning of trennen and its surprising family members.
As usual, if you want to recap and test yourself, just take the little quiz I have prepared for you.
And of course, if you have any questions or suggestions, just leave me a comment.
I hope you liked it and see you next time.

zerren – to pull, to yank (implies a heavy object and a lot of force); to sprain (for muscles – “sich+Dat etwas zerren”)
die Zerrung – the sprained muscle
verzerren  – to distort, to skew, to deform
verzehren – to consume (A formal word for food and drinks only)
der Verzehr – the consumption (Sounds stiff but is practical because it covers food and drink in one word)
zart – tender, gentle
der Zorn – the anger, the wrath