Word of the Day – “der Hammer”

A Hammer is a tool. And in German it's an adjective that'll help you ... ahem... nail the slang :). Today, we’ll find out what hammer means and how to use it. 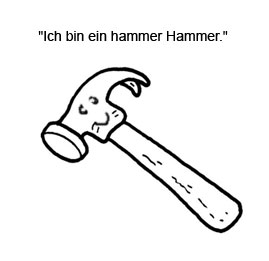 Hammer is a comestible. It’s usually made from porc and it’s either dried, smoked or wet cured. So basically it’s like ham just … hammer.
Wow. “Like ham, just hammer”?!
That must have been one of the unfunniest jokes ever. Oh boy, so much for my new years resolution of making better jokes. But hey… it can only go uphill from here. Or can it.
Anyway… of course, der Hammer is the exact same thing as the English hammer, the tool to put in nails. What you might not know though is just how much Germans like the word.
Let me give you an idea of how common Hammer is – the word Schere means scissors. I use scissors almost every day whereas I use a hammer once a month maybe. Now, when you type in” Schere” on Google you get about 8 million hits. For “Bier”, something that Germans really like, you get 78 million. And now guess how many hits you get for Hammer… … …
it’s freaking 280 Million!!!
Not as much as the 1.5 billion you get for “sex” and the 2.7 billion you get for “Auto” but for instance 2.5 times as many as for “Fußball” and “Bier”.
And even if some of the hits are due to the fact that Hammer is also a name, Germans clearly have something going on with the word.
What exactly?
Well… this idea of force and impact combined with the super easy pronunciation have inspired Germans to use Hammer for what is today: a pretty common colloquial word used to express the idea of “high intensity, high impact” or simply “extreme“.

This is a super common way to say that something was either incredibly cool or it is a very unpleasant event or piece of news. And there are many variation based on this…. I tried my best with the translation but I’m open to ideas.

This use is super common and so established that you can find it in newspaper headlines, especially of the yellow press. But that’s not the only thing you can do with Hammer. Hammer is actually incredibly versatile. Or should I say hammer-versatile? Because that’s what I’d do in German.

Just add hammer to an adjective to make it “super”. And boy do I love this. I think this is actually my favorite intensifiers. The vibe and the flow are just awesome, hammerawesome even. And it works for a wide range of adjectives and adverbs. The only exception I could make out are those ones that talk about elegance, fragility, beauty. Like… hammerschön or hammerfein. I don’t know… it’s not wrong to say that but the vibes just don’t really fit together, in my opinion.
Cool.
Now, when you look at real spoken German you’ll find more ways to use Hammer.

Looks like, when Germans have to decide between hammer and proper grammar, grammar stands no chance ;).
These last examples are super colloquial though. I hear them a lot and I use them daily but maybe it’s just a regional thing.
The first two we had, the stand alone Hammer and the hammer+adjective, are used all over Germany, I think. Not by everyone of course, but they’re not some crazy niche slang either and if you want to sound a little more native, just throw one in here and there. I mean…. with friends. You wouldn’t complain to your professor that the test was hammerkompliziert… unless he or she is hammercool.

All right. What we could do now is talk about the plural of Hammer and the verb and we could list all the different kinds of Hammers but if you ask me, there’s a better option… we take our Feierabendhammer and open a beer.
And if you’re now like “Wait… what’s a Feierabendhammer?” … well….take a look.
The tool is fun, but the name is just hammer… as in awesome :).
So that’s it for today. This was our look at the colloquialicious word Hammer. If you have any questions or if you’ve heard other uses for it or if you’re a German speaker and you DON’T use Hammer just leave a comment.
I hope you enjoyed it and see you next time.

So funny! I can’t wait until I can use “hammer” in conversation!

“Hammer drauf sein” means something like “to be in a really awesome mood or more generally, to be really cool.
It doesn’t work with “auf” though. In general, you need to think of these words like aus and auf and their (d)r-versions as separate things. They have a similar core idea, but their functions are different.

I just found this thread and have a question, hope someone is still here to answer me. I’m about to buy a Mercedes E63S (a very fast German car for those who don’t know), and may purchase a personalized (vanity) license plate for it. Among several ideas is a plate which reads “Der Hamr” which I believe would be a double entendre, because 1) it would pay homage to the original Mercedes AMG Hammer cars from the ’80’s, and 2) it would indicate that the car is “awesome, high intensity, high impact and/or extreme” (and since the car has over 600 horsepower, this is fitting). I also like that its two meanings would not be obvious to many people, and only those “in the know” (or those who speak German) would understand the plate.

Is “Der Hamr” correct, or do I want to use “Das Hamr” or some other similar phrase?

“der Hamr” is fine, but a German native speaker does need a bit of creativity or humor to make the connection.
Could you make it just “Hammer” without the article?

Hmm, I’d understand it as something like either “dropping a cool one liner ” or “do something pretty strange/crazy” (like coming half an hour late to the most important meeting ever).
But it doesn’t sound very idiomatic to me. Who said that to you? A German native speaker? From what area then?

Ok, that kinda fits with the context. Yes, it was from a German native speaker from Nordrhein-Westfalen.

We use hammer in a similar way in England. “I went out last night and got so hammered I can’t remember half of it!” – positive experience. “I’ll hammer you if you don’t pack that in” – negative experience.

Wow. Feierabendhammer… where has this been all my life. I need one.

Thank you so much for your course, love it!

Thanks for the correction. I am so struggling with Adjektivendungen. I have to find a way to practice them until I have a firm grasp. However, I have been having a blast with Hammer.

Das heißt so viel wie “That was it with the verbing” in sense of someone is forced to stop doing what they’ve been doing.
Ich glaube, das Beispiel von dir würde ich so übersetzen

– No more hammering from now on.

Oh, that one :)
Here’s the original video (I hope it plays outside Germany)

I never thought Hammer could be so cool, unless I forget it outside in this Hammerwetter! (Can I use it, sounds a bit like Donnerwetter)

Anyway, It’s only yesterday my colleague told me that they often shorten the pronunciation of words in Schwäbisch, and Hammer becomes Hammr! and Wir haben Hammer becomes Wir habn Hammr.

Thanks Emanuel. You are hammerawesomefantastic!

In Berlin it would be “Wia hamm hamma”. There’s also this joke sentence

Meh, not really a joke but anyway.
One thing though. “Hammerwetter” actually sounds positive to me.
When you add hammer to an adjective it just makes that extreme. But when you combine it with a noun, it sounds positive

– Hammerpreis (really good price)
Hammerhammer (really awesome hammer)
ONly if the context is crystal clear, it can sound negative. “Hammergestank” would be “horribly strong stench” for instance. Good thing you tried that out. I wasn’t aware of that nuance before.

No, you don’t have too. “Wia” is proper… with a short and under-enunciated “a”

This was great, I can’t wait to try it!

Let me know how it went.

So not declined then, i.e. not “der hammere Vorschlag” ?

Haha… no, hammer smashes grammar. But that’s really only for spoken German. I think, it is actually a shortened version

but it’s completely unclear what exactly is skipped. In theory, it could also be a compound in disguise

but as stupid as it sounds… it doesn’t feel like a compound. I asked a couple of Germans how they would spell something like and they agreed it should be two words. Not representative of course.