"einziehen" has dozens of translations. But they all belong to two core concepts. Today, we'll find out all about it and also what's up with "reinziehen". 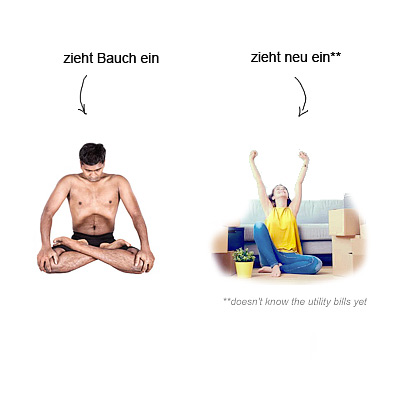 and welcome to Summer, Sun, Vocab Fun.
And today, I have something really cool for you, because we actually have the first episode of season 17 of

Yes, the series has actually been renewed for an entire new season.
100 more episodes of repetitive soap opera trash.
Will Mr. Ausmachen tell Ms. Anmachen what he did? Is Zunehmen pregnant? And what happened to the mysterious Mr. r-version?
All these are questions that we’ll not get an answer to today.
But what we will get answers for is how and when to use the verb


Some of you may know my article about ziehen. In it, I actually go over all the important prefix versions including einziehen.
But there are quite many of them and I didn’t go too much into details for every prefix verb in that article. And also, back when I first wrote it, I hadn’t really started giving the r-version much attention, so I’ve decided to give some of the verbs their own article.

And “einziehen” is definitely interesting enough for a closer look so even if you’ve read the article about ziehen, you’ll find something new here…. especially reinziehen.
For those who haven’t read the article on ziehen, I’ll put a link to it below this one.

But now let’s get started.

Usually, when learners meet ziehen for the first time, they learn that it means to pull. But that is really only half of it, because ziehen has two core meanings.
To pull is one of them. And the other one is to move. In the sense of someone moving from location to location. Like, think of a group of settlers trekking westward or a flock of birds moving south – that kind of moving.

Now, at first glance, these two ideas don’t seem to have all that much to do with each other. But the connection between moving and pulling becomes obvious once you think of a sled or an ox carriage, for example. Dragging your belongings with you.
That’s how the ideas relate and we can also see this connection in English, with words like train or trek, which also come from a core sense of pulling.
Just to make sure, though – if these associations don’t make sense to you, you can totally ignore them and think of pulling and moving as two independent ideas. These word histories are only useful, if they actually help you remember the meanings more easily.

Cool.
So we have these two themes, pulling and moving, and we can also find those in pretty much all the prefix versions of ziehen, including einziehen.

But you also find the moving-einziehen in other contexts, like a parade “moving into” a stadium for instance or some more figurative uses like a lotion “moving into” the skin.

There are a few more idiomatic uses probably, but as long as you keep in mind that ziehen can be about moving, you should be able to guess the meaning from context.

Now, the other meaning branch, the einziehen that’s about pulling, is a little more, let’s say eclectic.
Some uses are somewhat literal, like what we do when we want to take a nice picture of ourselves for Tinder.

But there are other uses where the idea of pulling is somewhat obscured.

Seriously… I don’t know why they use einziehen here in carpentry. It just happened to be the proper term.
Anyway, all in all, the pulling-einziehen is not all that useful in daily life because the one thing we’d all intuitively want to use it for – the sense of actually pulling something inside somewhere – is usually NOT covered by it.
That’s what the r-version is for.

Prefix verbs typically have some sort of little twist in the meaning and it is their r-versions that actually carry the most literal, factual, “spatial” meaning.
So if you want to pull in an object or person somewhere, reinziehen is what you need.

But reinziehen actually has a couple of more figurative uses as well. The first one is about “dragging someone in” into a discussion or fight.

And then there is sich etwas reinziehen, with the self reference being in Dative.
And this is a pretty colloquial, slightly slangy term for “taking something in”.
The two most common contexts are for actually looking at something, or, a bit more abstract, the notion of “trying to fathom” something but some people also use it for food or for some substances.

This reinziehen is pretty colloquial though. You’ll definitely hear it sooner or later, and it’s good to know it, but you do need some sprachgefühl to actually use it idiomatically.
So I’d recommend against it.
Using colloquial language is nice, but it’s a fine line between sounding idiomatic and sounding like a peaocky try-hard :).
Better to keep it simple, but elegant.

And with that little bit of advice we’ll wrap it up for today :)
This was our little look at einziehen and reinziehen and how and when to use it.
As always,if you have any questions or suggestions, just leave me a comment.
I hope you liked it, have a great week and I’ll see you in the next one.