A quick look at the meaning of the verb "locken", what it has to do with curls and which Greek philosopher invented swag. 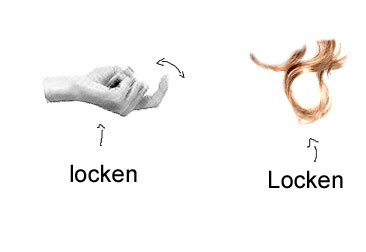 and welcome to our German Word of the Day. This time, with a quick look at the meaning of

It looks an awful lot like to lock. But that doesn’t mean that they’re related. I for instance look an awful lot like Chris Hemsworth, and yet we’re not related either. We’re just both very, very attractive – a walking temptation.
And that’s actually kind of what locken is all about. And not only the verb locken. The noun Locken can be attractive, too, if you like curls. Oh and let’s not forget about locker, which is also pretty attractive.
So clearly something to talk about, so let’s jump right in and unlock some new words :)

Let’s start with the verb locken. When you look in a dictionary, you can find translations like luring, enticing, attracting or wooing but the core idea is actually pretty clear for a native speaker. Locken is about “actively making someone want to come to you”. To give you a visual image… think of this “come here” motion you can make with your index finger combined with a salacious look. That’s a really good example of locken.

Now, looking at the second example, it makes perfect sense that locken is probably a distant relative of lügen (to lie). And it definitely does have a slightly manipulative overtone. But it doesn’t always imply something “false”. Like… the first example DOESN’T imply that the websites are sketchy in any way.
And the prefix version anlocken is a pretty neutral to attract, mostly in context of the animal kingdom.

And then, there are verlockend and die Verlockung which mean tempting and temptation and which are generally pretty positive sounding. The verb they’re based on, verlocken, has fallen out of use for the most part, but those two words are fairly common, especially in marketing.

Cool, so that’s the verb locken.
Now let’s talk about the noun Locken, which is the German word for curls. The singular is die Locke (one curl of hair) but the plural is much more common.

Now, from a boring, scientific point of view, the origin of the curly-Locken is the super ancient Indo-European root *leug, which was about bending, so it’s not related to the verb locken. But from a less uptight “Uh, everything has to be accurate all the time”, more fun point of view, the reason why Locken are called Locken is because they anlocken potential mates.  I mean… already the old Greeks knew about the allure of Locken. 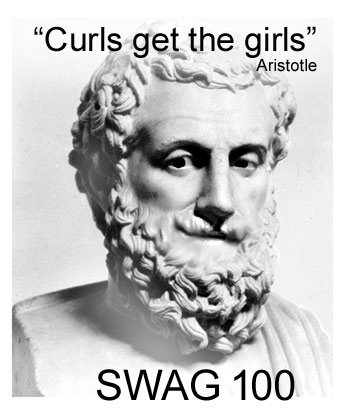 Man, I wish I had such a curly beard. Well, actually I wish I could grow a proper beard to begin with.
Anyway, now that we know the verb locken and the noun Locken, the last one missing is the adjective locker.
Looks an awful lot like the English locker but once again, that is totally misleading. Actually, German locker is kind of the opposite of what you want from a lock because it means…. loose. Not completely fixed.

And even more useful than that is the metaphorical use as chill, relaxed or in some contexts informal.

Of course there are also some related words but they’re pretty easy to guess in context, I think.

Oh and we also need to mention that locker can be used in sense of easily. I don’t know, if that’s known all over Germany, but I use it pretty often.

And that’s it for today.
This was our look at locken, Locken and locker and even though the three words are not related when we look at them from a science point of view, they are related because we want them to be. That’s how the law of attraction works. #spiritual:100
Oh and speaking of attraction… here’s one last example that combines all the words.

As usual, my attractive assistant has prepared a little quiz for you, so you can check how much you remember.
And of course, if you have any questions or suggestions just leave me a comment.
I hope you liked it and see you next time.

auflockern – loosen up (mostly figurative)
die Auflockerung – the cheer up