A fun look at the meaning of "lenken", the difference to "steuern" and how that relates to the German word for "to distract". 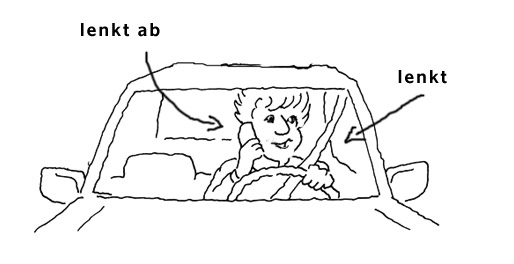 and welcome to our German Word of the Day.  This time we’ll have a look at the meaning of

Lenken is one of those words that many learners somehow miss out on even though it is something we do every day. No wonder, because can lenken can be done to all kinds of things… bikes, cars, companies, rivers, attentions, lives and more. Quite a selection, right? The thing that all these have in common is that they move. And lenken is about giving the movement direction.
Today we’ll find out how exactly to use lenken, what related words there are and of course what’s up with the prefix versions one of which is really really really important in context of THIS.
Haha… the second one… so cute. Anyway, where was I. Uh yeah… so are you ready to dive in and find out about lenken? Great :).

Lenken comes from the old Germanic noun lanca which once was the word for hip. No, not Chai-Almond-Latte-with-Choco-Chia-Drizzle-hip. The other hip. The one where that chai latte settles down as fat. Lanca comes from one of the many Indo-European roots for bending,  and the original idea was simply  part where the body bends. In German this evolved into the very useful word Gelenk which is the word for all joints.

Lanka is also the origin of the word link, and this word actually kind of combines all the idea of the family. A link in a chain is bent, a chain itself bends, and the links are kind of like the joints (Gelenke) of the chain. But that’s not all. Today there’s another kind of link. The internet link. And what do those do? They direct us somewhere. Just like  lenken :). Because that’s what lenken is all about… giving direction to a movement.
And now with the history out of the way, let’s look at lenken in action.
And we’ll start with some examples from traffic where it means to guide or to steer.

And here are a couple of important nouns:

But as we’ve mentioned it’s not limited to traffic so let’s look at some other examples, too.

The translation of the last one (common idiom, at least in German) is a bit odd.  I guess the translator took some liberty because he or she wanted a rhyme but … in a normal contexts lenken is definitely NOT be a good translation for to dispose.
Anyways… now let’s get to the prefix versi… oh hold on, there’s a call here. Henne from Norway, welcome to the show. What can I do for you
“Hey Emanuel, so great to be on the show.  I have a question…. well two actually”
Sure, go right ahead.
“Cool, so I’m confused about  steuern. I’ve heard that used in context
of cars and I was wondering if there’s any difference to lenken.”
That’s a great question… steuern is actually the direct brother of to steer and the whole “helm” of a car for example is usually called das Steuer but as a verb itself it is not used that much for cars and not at all for bikes. It kind of sounds bigger, heavier, clunkier than lenken, and I wouldn’t use it in any of the examples we had.
“Oh okay… so it’s more the vibe than the meaning.”
Yeah… lenken sounds smooth… oh and also, lenken is a pretty continuous act and closely connected to direction. Steuern is also used for controls that only give one instruction per hour. Like… imagine a computer that turns on your coffee machine at a certain time… you can call that steuern but not lenken. Does that help?
“Yeah I think I got it. Great, thanks so much.”
Oh thank you for calling, this was a great question. Maybe I’ll actually do a WotD on steuern.
“Oh you mean because it also mean t…”
Hello, hello Henne are you there? Hmmm weird, I guess the connection failed.
Anyway, now let’s get to the prefix versions. And there’s one which is really really really useful: ablenken.
Ablenken is about directing something off the track or trajectory. In real world contexts it translates to deflect.

But the really important use is about “de-routing” an abstract thing… our attention. Ablenken is THE word for to distract.

Theoretically there is also ablenkend which would be the equivalent to distracting but nobody uses it. You could use störend or nervig or you could just  make a normal sentence.

All right.
Besides ablenken there are a few others. Umlenken is just a general term for changing abstract directions, einlenken is about changing the direction in a discussion and coming around to the course of the other party. Umlenken is mostly used for changing of abstract courses and  auslenken is mainly used in physics in context of moving something out of the normal position.
Here are some examples…

but neither of those is really common so I’d say… passive pile.
The one you need is  this one.
… …. hahaha… at 0:45 the move… so funny…. hahah.. oh my God that is so cu… oh… oh sorry, I forgot we’re still on. But I think we’re done for today anyway :).This was our German Word of the Day lenken. It is related to link and it’s a continuous rather hands on way of giving direction. It’s THE word for steering cars and bikes but it also works for abstract stuff.
As always, if you have any questions or suggestions or if you want to try out some examples just leave me a comment. I hope you liked it and see you next time.

ablenken – to deflect, to distract, to divert
die Ablenkung – the distraction (both good and bad), result of a diversion
das Ablenkungsmanöver – the diversion
abgelenkt – distracted

einlenken – come around, give in, relent
umlenken – change direction (all kinds of abstract stuff, not really for cars and bikes)

auslenken – to displace, to deflect (physics)
die Auslenkung – displacement, elongation (for a coil for example)