The German "lassen" means "to let" and "to leave". Today, we'll explore the common theme, the various prefix version and what that has to do with passive voice. 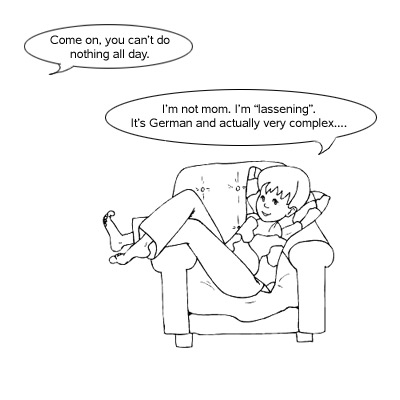 and welcome to our German Word of the Day. This time we’ll, finally… at long last :),  have a look at the meaning of

Lassen is a very important verb and it’s very confusing.
Sometimes it’s to let, sometimes it’s to leave, sometimes it’s something else. And sometimes is used for some kind of passive or something.
Oh and let’s not forget the prefix versions of lassen, for example the infamous verlassen which means to leave – except when YOU are trying to use it in a sentence. Then it’s usually wrong.
So… we have lots to talk about.
This is quite a huge topic, so we’ll split it in two parts. Part two will be completely dedicated to the various prefix versions of lassen. And today, in part one, we’ll look at lassen itself. And instead of getting tangled up with its main translations to let and to leave, we’ll actually find one core idea for lassen and see how its various uses relate to that.
And that includes this weird thing called Passiv-Ersatzform that you come across in B2 courses.
So… are you ready to dive in and become a master of “Lassening”?
Then let’s go :)

The origin of lassen is the almost unacceptably ancient Indo-European root *lē(i)-. This root carried an idea of to let go, to slacken but I think an image might capture it best:
think of letting the air out of a balloon. Pffffffffrrrrrrrrrrt… and you’re left with a flabby piece of rubber.
This root grew into a pretty large word tree with branches in many languages. In English for example, we have the direct brother of lassen, to let.
But also late and last are part of the family, and they’re are based on the idea of weak or slow travelling… low energy travelling if you will. Then, there’s also lax and lazy which mean that we don’t  invest much energy into something, and to relax which is all about removing tension  from a system. And tension is just a form of energy.
And this notion of little or no energy is actually really helpful for explaining lassen. If we make that into a verb, we could say “investing no energy into something” and that is kind of similar to the simple idea of

That’s the core of lassen and as you’ll see now in our little tour, all the various uses of the verb are actually just different angles of that idea.
So let’s take a look.

lassen – the tour of its meanings

And we’ll start with the core idea itself, because lassen is indeed often used as literally not doing something, as opposed to doing it. Think of it as the opposite of machen.

If you’re wondering about the difference between the last two… the es sounds less direct and focused (and harsh).  You’d use the first if you kid was messing with your phone for example and the second if you’re friend, who recently broke up, ponders calling the ex again and you think it’s a waste of time (and energy).

but also in a sense of not taking away…

… and it also works in combination with activities.

As you can see in the last example, lassen does NOT need a zu, even though it’s not really modal verb. But English to let works EXACTLY the same, so this should feel natural.
What’s less natural are some of the more figurative uses of this lassen …

As you can see, to let is not a translation in these, but I think the core idea of permission is still pretty present.
And the two verbs line up again in the following, very common kind of statements:

This is about inviting and initiating, so it’s actually a call to PUT IN energy. And that doesn’t really seem to fit in with the base idea of not putting in energy. But if we think of it as a kind of “Allow the momentum.” then it fits perfectly.
The phrase isn’t as common in German as it is in English, but still, it’s pretty common and works with all kinds of verbs.
Including lassen itself :).

Yes, we really do say that :). And it brings us full circle to the beginning of our tour because it basically means

All right.
So this was our little tour along the different ideas that we can express with lassen. And I hope you could see that they actually aren’t that different but just different aspects of a base idea of not putting in energy.

Here’s a quick recap of the ideas we had so far:

Note that There’s one idea that is completely missing: the idea of LEAVING in the sense of  NOT STAYING.
That’s because it’s NOT a meaning of lassen. Instead, we need a prefix version for it.
But we’ll talk about those in part two.
For now, we’ll need to talk about one more aspect of lassen itself. One that doesn’t really seem to fit in with the rest.

“lassen” – having something done

“Thomas…. feel free to help with the dishes.”
“I appreciate the freedom to help, dude!” (heads for the PlayStation)
“Hey uhm… that’s actually not how I meant it.”

I think you all understood the problem in this little conversation. The first statement wasn’t about freedom of choice. This was a demand in disguise.
Many phrasings that talk about permission or opportunity (like may or could) can be used that way. And so it’s no surprise that lassen can do it, too.

This sentence can actually mean two things. One is that I allows them to wear heels. The other is that I have them wear them.

In this case, it’s the first one. I would never make them wear heels. I mean, except this one time when they put too much sugar in my coffee… anyway, here’s a couple

And while these are about actually “making” something happen, this lassen is also used in a more toned down sense of getting a service.

And this type of phrasing actually doesn’t sound bossy at all and it’s much less “demanding” than “have someone do something“.
And it’s really really really common, so let’s look at a few more examples.

All right.
Now, we already have quite a bit of input but there’s one more thing I want to talk about, just because it ties in so well with all we’ve learned.
I am talking about what in textbooks and course is often referred to as

which roughly translates to  “Term that no German has ever heard of”.
Seriously, people usually do not know that term. It sure sounds very complicated and B2-ish, but it’s actually not difficult at all. Because it’s just a natural byproduct of using  lassen with a self reference.

This means that the unicorn allows us to pet it. Or literally, it allows itself petting.
Okay, this example is nonsense of course, because unicorns HATE human hands on their fur.
But anyway, if we now change the example and use a mere object like a door and the verb to open, we get this:

And this basically means that the door can be opened. And THAT’S why the German phrasing sich lassen is called Passiversatzform…. because it can replace a proper passive form with werden.

The name Passiversatzform might sound a bit intimidating, but it’s nothing special. There’s always more than one way to express an idea and many languages have ways to express the notion of a passive without the grammatical passive.
Actually, I think it’s not very helpful to focus on that too much, though.
Take a look at these examples:

I mean… where does “can be done”  (a grammatical passive) end and lets you do (not a passive) start? All these sentence are the exact same phrasing but would they all be called Passelaffufforms? No.
This sich lassen phrasing is really  just the plain straight-forward allow-meaning of lassen combined with a self reference. And in certain contexts, this can express the same thing that a passive would express.
Here are a few more really common uses…

Now, there are lots of common phrasings with lassen but if you have a question about one of them, we can always clear it up in the comments. For today, we’ve done enough, I think. And next time, in the second part, we’ll face the swarm. Dun dunn dunnn.
I can already see it in the distance. A dark menacing cloud. Prefixes. Many, many prefixes. But…. the cloud’s not here yet so… uhm…  I guess we’ll have to wait for part two :).
Anyway, I hope you got a good impression of what lassen is used for, and more importantly, how it all connects. If you want to check how much you remember, just take the little quiz I will have prepared at some point… after the summer of 2020 is over probably :D.
If you have any questions about lassen so far or if you want to try out some examples just leave  me a comment.
I hope you liked it and see you next time.