Next Lesson >
See all grammar modules 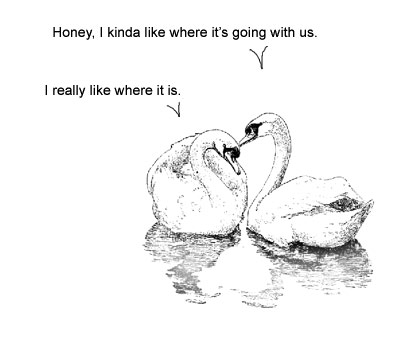 and welcome to a new episode of the epic YourDailyGerman grammar course. Today, with a grammar topic that is so sexy, it’s actually a better fit for German’s OnlyFans account:

Tssss…. so hot!
Prepositions are these little words like auf or vor or mit and a good portion of those can be followed by Dative AND Accusative, each having a different meaning.
If you’re more of a beginner, then you might be like “Huuhhhh?” and it might not be time for this topic yet.
But it’s definitely a very important thing if you want to sound idiomatic at all, and I have to say… most explanations out there, be it on Youtube or in more formal textbooks, are a little bit off.
Not wrong, but odd.


So yeah, that’s what we’ll look at today. First, I’ll give you the quick version and then I’ll elaborate a bit. And then we’ll wrap it up with an exercise.
Here are the quick links so you can jump around.

And now let’s jump right in.

German has four cases. Why it has them? No one knows. Maybe it thinks its a lawyer or something.
But anyway, the four cases wouldn’t be a problem if German just had them on its desk somewhere. But nope, German really really likes its four cases and it rubs them in our faces all day.  And prepositions offer no respite.

It’s not enough that there are several dozen of them and they don’t line up with their similar looking English counterparts. No. German is like “So just FYI…  I want a specific case after each preposition.”
Oh, okay, will it be the same case always?
“Of course not, duhhhh.”
Now, for a good portion of the prepositions, the case they go with is fixed. Some go with Accusative, some with Dative and very few go with Genitive.  Like,  für for instance will ALWAYS be followed by Accusative, no matter what.

But there’s a group of prepositions which can be followed by either one of TWO cases – Accusative and Dative.
Here they are:

And this is an instance where cases actually carry a significant amount of meaning.

Some sources say that it’s about whether or not we have a movement, but this is NOT really the point. What matters is whether we’re talking about a destination or not.
Let’s do an example:

In the first example, we’re talking about where the cup currently is; it is stationary and we’re marking that with Dative. In the second example, the current position of cup doesn’t really matter. It is somewhere mid air. What we want to talk about is where the cup is headed; it’s destination. And we’re marking that with Accusative.
Now, this example was pretty clear because to be is stationary in itself, while fallen is clearly a movement. And that’s how many sources frame it.

But that’s NOT the core of it.
In fact, if you make a mistake with these two way prepositions, it wasn’t about a mistake in grammar… it’s a mistake in “message”.

Check out this example:

Here, we have the same verb in both examples and it is clearly a movement verb. And yet, we have used Dative in the first version? Isn’t that wrong then?
No, the Dative tells us that whatever happens in that sentence (the jogging) happens at a fixed location: in the park. So, I’m in the park at the beginning of my run, I’m in the park at the end of it. My location relative to park doesn’t change throughout my run.
The Accusative in the second example on the other hand, the park is the destination of my run. I’m not there before the run, I am there after.
So, just because the verb is a movement verb doesn’t mean the case is clear.
And same goes the other way around.

Schreiben means to write, so the verb itself is not really a movement verb, this time. But there’s nothing wrong with giving writing a direction either. In the first example, the Dative marks the table as  the location where my writing happens. Maybe I sit there and write a letter to someone. In the second example, I’m also at the table writing, but the Accusative marks that the main message this time is that the table is the destination of my writing. I am literally writing onto the table.
Cool.
Now, one more example, again with twist.

Did you have a hard time figuring out the meaning of the second one? Well… that’s because
The second version doesn’t work.
And the crucial part is that it’s not because the grammar is wrong or anything but simply because it makes absolutely no sense.
You can give sleeping a direction in time …

Here, the Accusative is fine. The new year is the destination of our sleeping.
But unless you’re a poet or something you CAN’T give sleeping a direction in space…

So, the bottom line of all of this is that the case choice we do for the two-way prepositions is not just some annoying bit of grammar. Two-Way Prepositions are a way to get our message across. Using Accusative answers to  “where’s it headed”, using Dative to “where is it (happening)” . And  making this distinction explicit is a common theme of the German language. German is really anal about spatial information.
The proper choice depends on what you want to say and if something doesn’t work then it doesn’t work because it’s nonsense. And it’s most likely nonsense in other languages, too.
Cool.
Now some of you are probably on the edge of their seat now asking the following: “But, but Emanuel, EMAAAANUELLL… what about stuff like warten auf? How do I know which case to use for those?”

That’s a very good question. German has loads of sort of fixed combos between verbs and prepositions that don’t really have anything to do with space or time. And if a verb comes with a two-way preposition, many learners get confused about which case to pick.
We’ll talk about those combos a lot in the individual articles for the prepositions but I can give you a trend right away:

The local notion of the Dative is very very strong and in many instances, it will sound like you’re actually talking about a location. Here’s the obligatory unicorn example

When you think about it, the anticipation that is at the heart of warten is in some way like a directed movement. My waiting has a goal, a target. But this is the stuff that we’ll do in the series, so lots of theory fun ahead of us :).
Cool.

So now that we know the how and what about two-way prepositions, all that’s missing are the prepositions themselves. Here they are 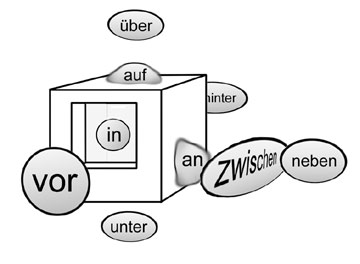 There’s really cool, simple way to quickly check if a preposition is two-way or not. If you can “arrange” a cup and a lighter so they “show” the preposition without moving, then it’s two-way.
It doesn’t really work for zwischen, to be honest, but let’s just think of that as poetic license. The lighter can be zwischen the table and the cup.

Cool.
Now theory is all well and good, but practice makes perfect. So to wrap this up, let’s do a little work out.

I’ll give you a few sentences and mark the case and you have to decide whether it is a correct sounding sentence and what it means. And if you want, you can also think about whether the other choice would work, too. Here’s an example:

We’re using Dative, so auf dem Tisch is marked as the location where the rest of the sentence takes place. That means, that I am laying the book while being on the table. And that doesn’t make too much sense, right. So this one would be “wrong” and Accusative would be the proper choice here, because it would mark the table as destination of my laying.

So here you go… and be warned, these are pretty tricky :)

And here are the solutions – with a little explanation, so you actually know what’s going on :)

So how’d you do? How many did you get correct? Was it difficult? I bet you’re having a lot of questions about this now so let’s talk about it in the comments.
And of course, if you have other questions about any of this or if you want to try out some more examples leave a comment too.
So that’s it for today. This was our look at two-way prepositions and I hope the whole thing is a little clearer now. The case choice is a way to mark something as either destination or location for an event and the difference between right and wrong is mainly what makes sense. And with this we’re now well prepared for the upcoming series on prepositions :). It’s not gonna start next week, but it is coming and it is going to be epic.
I hope you liked it today, I wish you a schöne Woche und bis nächstes Mal.

Next Lesson >
See all grammar modules
This entry was posted in A-Level, German Grammar Basics, Grammar. Bookmark the permalink.