We'll go over the important time prepositions in German (bis, seit, vor,...), see what they express and what common mistakes to avoid. With plenty of audio examples :) 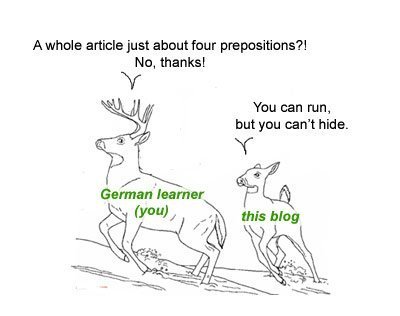 and welcome to the German is Easy Learn German Online Course… and today, it’s time for THEM.
Prepare yourself for the 5th part of the Time Mini Series,
get ready for:

Now, if you’re like „Oh god oh god, prepositions… this one is going to be so hard, I don’t know if I can handle it“ (which, on an unrelated note, is in fact what she said back when this was still funny) I have good news for you:

German time prepositions are neither hard nor numerous. #fact

The reason why we are talking about them this late in the series is NOT the level of difficulty. It’s the mere fact that many examples with prepositions use words we’ve learned in the parts before.
And we need to be able to correctly address points in time first before you can use a preposition to put this point in time in a relation with something. Because that’s what prepositions do… they express relations between stuff (read more about prepositions in general here).

Anyway, today we’ll talk about von, in, seit, bisand ab, see what idea they express and what common mistakes to watch out for. And of course, there will be LOADS of audio examples, so let’s friggin’ jump into it…

But before we talk about the actual prepositions, we need to talk about one concept real quick. Nothing too serious. Just some little something that’s REALLY IMPORTANT and useful for ALL languages. I am talking about

the difference between a time span and a point in time.

A time spanis a measure of time, a quantity. And you can ask for it using “How much time?”.

A point in time on the other hand is a word or a group of words that kind of names a more or less specific point in time. And you can ask for it using “At what point on time?” or simply “When?”.
These are basically what we’ve been talking about in the three preceding articles.

Now why does this matter, you ask?
Because grammar! Some German time prepositions only work with a span, some only with a point and some are ok with either. An English example for this are the prepositions since and for. For works with a span (a quantity) while since refers a point.

So, for each preposition I will tell you whether it takes a point, a span or both using these beautiful colors :).
Cool, so… I think now we’re set.

Vor is THE word to give a measure between now and some point in the past. Like… how time passed since that event in the past.
In English, this is done by the word ago. But does that mean that vor means ago? Well, no because the structures are different. Vor is a PRE-position whilst ago is… well, not a preposition… if any “-sition” than it is a post-position.

The position is the only difference, but it’s an important one. Vor comes first, ago comes last. Now, if you are a beginner and you are a native English speaker and you want to say some ago-thing in German it will happen to you that you start right with the span… like here:

If you do that, start over! There is no way to save this and get anywhere near correct. You can’t just say vor at the end of something. Vor always starts a group of words and a German would need to do brain gymnastics to figure out that the vor is supposed to be part of the time indication that has already been said. So, it is no problem if it happens, you have to get used to say vor first, but start over if you do it wrong and correct yourself.

Now, is there anything to watch out vor… I mean for?
Well, let’s say you saw a pink fluorescent Elephant last Monday. However, that wasn’t the first time because you had seen this beauty already on Saturday… can you tell the story using vor 2 Tagen?

This doesn’t work.
Neither in English nor in German. Both words, ago and vor do refer to (some) now. This might be different in other languages, so I felt like I have to say it. Let me know in the comments, if that actually works in your mother tongue :).
Cool… moving on.

In has two functions for time.
First, it is the counterpart of vor in the future. If you want to indicate a time difference, a span, between now and some point to come… use in.

And the second thing in is used for is a general indication of a duration that is needed for an achievement … sounds complicated but again, it’s the same as in English.
You’d ask “In how much time did you finish this?”… kind of.

This sentence used past tense, so it clearly DOESN’T mean that I’ll learn German three months from now, but that it took three month to learn it (#falsehope)
And this duration-in also works for the future.

Now, with two ideas carried by one word there is a bit of room for confusion.

This one is not clear. Will you do it three days from now or will it take you three days to do it… I don’t know.
These cases are rare though. Usually, Captain Context will make it pretty clear.
Cool.
Is there anything to watch out for with in?
Yes. The German in is NOT used for ins that are used in sense of since or for.

This does NOT work in German and a German native speaker would not understand what you’re trying to say.
So yeah… even though German in and English in are really similar, try to remember the two concepts of German in and not just the translation.
Here’s an example that brings them together :)

Seit is used to indicate when an unfinished action or state has started – in the PAST.
Seit can be used with time spans and points which means that it is the German word for since AND for.

That’s why many Germans will make mistakes with sinceand for... because it’s one word in German. Wow, one word in German for two English words… that’s rare :). Usually, it’s the other way around.
Anyway, of course there are a few thing to watch out for.
One is that seit is NOT for in the following example.

This action is over. You’re not sleeping anymore. But seit does imply that it’s still going on. The correct German phrase would use either für or better yet no preposition at all.

Now, one question we need to talk about real quick is the question of which tense to use with seit.
Well, you might have noticed that German is really lax when it comes to tenses. So much so that the common subconscious compensates for this “lack” of precision by valuing punctuality so much… this is just a theory though :)… anyway… so tenses.
Seit works with past AND with present, but there’s a difference in meaning.

The first sentence states a mere fact. It’s been a week that I haven’t eaten meat, it just happened that way.
The second sentence on the other hand expresses that this is something I’ve been “actively” doing it and I am doing it still. I don’t eat meat by choice.
The following example takes this to the extreme.

Now, the difference is not that big for all the verbs. Sometimes, it’s but a nuance. Still, it’s good to keep that in mind.
All right. Moving on.

Ab is kind of the equivalent of seitfor the future. Seit is used to say when something started (or for how long it’s been going on). And ab talks about when something will start. And just to make sure… as usual, German will NOT bother actually using future tense here :)

Unlike seit, though, ab can only be used with points of time . It does NOT work with spans.

If we want to use ab with a span, we have to do two steps. First, we use the span to indicate a point in the future. The preposition for that is one we’ve already learned: in… so this would be in 3 Wochen. This block is a point in time and now we can put our ab in front o fit…. ab in 3 Wochen. Yes, ab in a fairly common thing to say :)

While not being the prettiest sentence to utter, people do talk that way at times.
Now, I have a little test for you. Is this also correct?

No, it’s not.
Because ab doesn’t work for the past. The word for that is seit.Ab does work with jetzt, though. Do you know these kind of little games like “Who talks first is stupid” or “ Who laughs first secretly eats boogers.”? We played those a lot at univers… uh elementary, yeah at elementary school … so if you want to start a competition like that, here are the words:

Damn it, I think I just lost :).
Anyways, the concept of bisis the opposite of seit and ab. Those two indicated when something started.
Bis indicates the end of an action (or state). It is used for past, present and future and you already know it from the various good bye phrases like “Bis bald” “bis morgen” or “bis dann”.

Does it also work with spans? Nope!

If we want to use a time span, we have to do the same we just did with ab… double up on a preposition.
First, we indicate a point in time using the span and vor or in respectively. And then put bis in front of the whole thing.

You can see that English uses the same mechanics… you need 2 prepositions to make it work, untiland ago but in German, the prepositions are right next to one another so this might make it look odd to some of you. Anyway, people do talk that way and they even use it to say good bye

And speaking of good bye… this is actually it for today :).
There are some more things to know, namely the teams vor-nach and von-bisand the word her. But I think this is enough for one session.
The prepositions we learned today are the most important ones anyway. Here they are again with the question they are answering.

And now it’s time for you to test yourself with our little quiz.
And after that, as always, if you have any question or suggestions about the article or the quiz, just leave me a comment. I hope you liked it and see you next time… which according to some is also, what she said.