In part two of the (two part) series, we'll talk about the nitty gritty of German relative clauses: skipping the pronoun, using prepositions and a weird split. 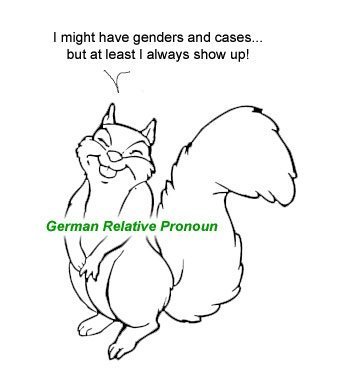 and welcome to the second part of our awesome series on

In the first part (find it here), we learned a bit about relative clauses in general and in English, just have some sort of background. And then we learned the basics about how it works in German.
Here are the three important points:

Today, in a sort of Q and A format, we’ll talk about the finer details and flesh out some differences to English that lead to a lot of mistakes. Sounds good?
Then let’s jump right in :)

One quick definition before we start: I keep using the word entity, and I realized that some of you might think that’s some special grammar jargon term they don’t know.
It’s not.
What I mean by entity is a thing or a living being, that is part of a sentence, and the reason I say entity is because I am simply to lazy to say “thing or person” all the time.
Cool.
So now let’s get to the first question.

Can we skip relative pronouns in German?

In English, sometimes you can (or even should) skip the relative pronoun.
Here’s an example

It’s pretty much standard and good style (I believe) to skip the relative pronoun here. Specifically, it’s done whenever we have a defining relative clause (we talked about this last time), but that doesn’t really matter. What matters, is that it’s REALLY common in English and it sounds kind of slick.
So naturally, many people who speak English as their mother tongue or at least fluently, tend to do that in German as well.
But I think deep down inside you already know where this is going. Exactly…

In German, you MUST NOT skip the relative pronoun, ever. It’s sad, but it’s true.
So we need to go through the motions every single time – looking left for the gender (in our example das), looking right for the case (in our example Accusative… “Ich liebe etwas”).


If you’re sure about gender or case or both, just use die as a default, if you’re in conversation. It has the highest chance of being actually correct and sounds the least odd. But you MUST NOT just skip the pronoun.

This is not only wrong, it is actually really really hard to understand for a native speaker. Any sound, any syllable is better than just skipping it all together. It’s a rhythm thing. So if you catch yourself doing this… just add something that sounds like an article. It’ll sound MUCH better and it will be understandable.

The German clearly doesn’t sounds as elegant and catchy as in English, but hey… it’s German. It was DESIGNED to not be elegant.
Which brings us right over to our next point… prepositions.

What if there’s a preposition?

So far, the relative pronouns were integrated “directly” into their relative clause, be it as a subject or as a direct object. Let’s look at an example so it’s more clear what I mean.
Here are two independent sentences that both deal with a particular – in this case a book.

The book is the direct object in the second one and of course the relative pronoun has that role as well, if we decide to combine these two sentences.

So far nothing new.
But many entities are integrated into a sentence by using a preposition.

The about is a crucial part here, without it, the second sentence would sound wrong. The question is what happens with it, when we combine the two sentences into one.
And English tends to do something peculiarly familiar…

At the end would be AFTER yesterday. What English really does is basically leaving the preposition where it was in the verbal phrase. Like… it is to ask someone about something. And that makes sense, in a way, because the preposition does depend on the verb, after all.
But anyway, it doesn’t really matter why English does it this way. What matters is how it works in German.
And now what would you say: does German word the same?
The answer is….

Absolutely not. Yes, German likes separating things and putting them places, but not in this case.
In German, a preposition and the thing it connects are one unit that doesn’t get split and this the preposition comes BEFORE the relative pronoun just like it was before the actual entity.

And for comparison the English version again.

This is COMPLETELY different to German and using this English structure in German is absolutely incomprehensible.

Like… if you want to know what confusion looks like, just say this to a German speaker. You need to first say the preposition, then the relative pronoun and then the rest.
And this way of doing it isn’t alien to English either.

Not sure, if that’s actually correct for this very example, but sometimes it is. It just doesn’t flow as nicely, I guess.
Well… THAT’S how it always is in German.
Let’s do another example.

Yeah… not so lean anymore :). But that’s how it is in German and you’ll have to get used to this non-flow.
Cool.
Now, one last thing before we move on… looking at the last example, some of you might be wondering:

And that’s a good question to have. I mean, the da-word basically says that whenever you have a preposition with a pronoun and the pronoun refers to NOT a living being, the we use a da-word instead.
Well… that DOESN’T apply to relative pronouns. And using a da-word sounds quite weird, because they don’t have this “relative/attached” feel to them.
That is a different story for the wo-words. But we’ll learn more on that in part three of this series when we talk about free relatives.
For today, we’re almost done, but there’s one more question to address.

Is it true that in German we can separate the relative clause from the entity it belongs to?

Yeah… I bet you’ve asked yourself that many times :D.
Seriously though, we’ve learned that the relative clause comes right after the entity it is referring to. Well… in
German, there’s an exception to that. Of course!
Here it is…

Can you see, what’s I mean?
The entity is “das Buch, das du mir empfohlen hast”, that is one unit. And normally you DON’T split units in language. But if there’s only a tiny little bit of verb coming after that, like in this case gelesen, then German allows you to splice off the relative part and move it to the end, like it were a weil-clauses or something.

If we DON’T split the unit, then we’d get this

We have the main sentence (***), then we drop to a sub-level sentence (__) and then we go back up just for this tiny little pecker of main sentence. And that doesn’t look very good and it also doesn’t sound good.

Now, as soon as we have more stuff to follow the relative part, you can’t do this split anymore…

And now what would you say… both the following sentences are correct, but which would you say is more idiomatic.

Exactly, the first one. So this weird split is not limited to ge-forms.
The question when to do it actually doesn’t really have a clear answer. For prefixes and ge-forms , it is pretty much always a good choice to split.
But beyond that we get into the realm of the Idiomatic, ruled by Queen Fickle, the Third.
Want a taste?

Here, I have no idea, which is better here. The first one sounds a bit disjointed, the second one overly complex for this simple piece of information. (If there are native German speakers reading this, please please let me know your opinion in the comments).
And then, there’s stuff like this…

This is utter nonsense of course, because I learned classical guitar from that man, not piano. But apart from that, this example is REALLY great. Just looking at it, we see that there’s quite a lot of “verb” left, and it even involves a noun (Klavier). One would think that making a split here is quite the stretch.
But it’s not.
In fact, version number two is perfect if our main message is the fact that it was THIS VERY GUY. We just need to add an emphasis to DEM MANN.
This ties in with the fundamental principle of German word order… those of you, who’ve read my series on word order or on the position of nicht, will know what I mean :)

that the main news, the main message is drawn toward the right

And not only that… it also ties in with the English distinction between defining and non-defining. Because version number two, the one where it can be split is clearly an example for a defining relative clause. The man is IDENTIFIED by the fact that he taught Mozart. It’s not just a piece of additional info about a guy that we already have singled out.
So German does seem to have at least some notion about defining or non defining after all, which brings us full circle to the very beginning of the series.
And it also brings us a headache.

Oh man, I don’t even remember what we just talked about.
Something about splitting off the relative clause or something.
I think it’s time we wrap up for the day :).
This was the second part of our mini series on relative pronouns and the main take-aways of today were:

In part three, we’ll go turbo nerd as we talk about free relatives.
But as far as normal relative clauses go, that’s all you need to know.
As usual, my super smart and stunningly fit assistant has prepared a little quiz for you, so you can check how much you remember about the theory. And we’ll do a really big practice session soon, so be ready :).
As always, if you have any questions or suggestions, just leave me comment.
I hope you liked it and see you next time.