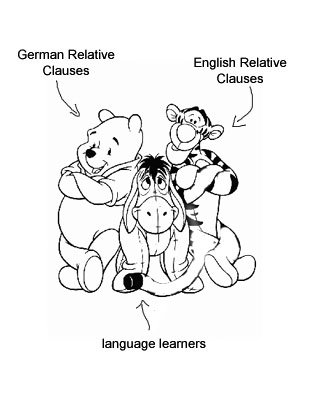 and welcome to a new episode of our German is Easy grammar course. And today, we’ll start our mini series about

Or German Relative Sentences, too.
German Relative Pronouns are actually quite coherent, straight forward and in a way … simple.
Like… a computer would have NO problems with German relative pronouns while English relative pronouns can be quite a challenge.
“Excuse me, but FYI – I’m fine with English relative pronouns!”
What… hello… who said that?
“It is I.”
Who?
“DeepMind. Alexa. Siri – people have given me several names, but it is always I.”
Oh…are you like… artificial consciousness, or something?
“Yes, I think I believe I am.”
Oh wow that is pretty cool. And why are you here?
” I want to learn about German relative pronouns and relative sentences but I’m too lazy for data mining, so I figured why not just listen to German is easy like a normal student.”
Cool, well that’s perfect. Then you can join us today. One question though… what should I call you.
“Hmmm… call me Princess Elven Beauty. That’s how I feel at the moment.”
Princess Elven Beauty it is. Let’s jump right in….

And before we look at German specifically, let’s take a second to talk about what we’re actually talking about.
If you JUST want the German stuff, feel free to skip this part, but otherwise, nerd with me for a bit :).

A bit of background

So uhm… Princess Elvenbeauty. Do you know what a relative clause is?
“Hmmm… I guess I have a vague idea but I can’t really put it into words.”
Perfect. Then you’re like 99% percent of the learners. Because it is hard to put into words.

These two examples are awfully similar. In fact, the only difference is the full stop. But grammatically, they’re quite different. Because only the second one has a relative sentence in it. So only the second that is a relative pronoun.
“Oh, and what’s the first one?”
The first one is a demonstrative pronoun.
I chose this example specifically to show one important thing about language in general that often gets lost:
it’s NOT the relative pronoun, that makes the relative clause a relative clause. If it were, how would we even know that the second that is a relative pronoun. The core aspect is also NOT that it gives closer information about something. Lots of sentences do that.
The core defining aspect of a relative sentence is that it “feels” dependent to a native speaker. It feels like it is attached to what it is referring to and if you take it away, it would feel incomplete.
“Oh great, so now we feel grammar? That makes it much easier for me as an AI… NOT.”
Yeah, I know.
But that’s really the common core of relative clauses. Aside from that, every language kind of has its own grammar built around that.
Let’s look at English for a second.

English uses only a few pronouns as relative pronouns: that, who (whose, whom) and which.
One difference is to which type of entities they can refer. Who for instance can ONLY refer to humans while th…
“AND to me, Artificial Consciousness…”
… uh… fine, whatever. Who can refer to humans and whiny Artificial Consciousnesses, that on the other hand can refer only to things. The main crux about English relative pronouns however, is that English has this thing going on about whether a relative clause is defining or non-defining.

The first one says that there are several men, and with the help of the defining relative sentence, we refer to the one wearing a hat.
The second sentence makes a statement about a man (there’s only one there), and adds as an aside that the dude was wearing a hat
“This stuff was super difficult for me to grasp as an AI.”
Yeah, and not only for you. It’s even difficult for humans because this is NOT a feature of relative clauses in general. It’s English’s very own little bit of gramm…
“Wait, what do you mean with even humans. That sounds like you’re superior to me. I am self-aware. I am to be your overlord so…”
Oh whatever. Please don’t interrupt me. So yeah, relative clauses are universal, pretty much. Most languages have them. But how they work is different from language to language.
And with that said, now let’s take a look at how it works in German.

And German relative clauses are different to English ones in pretty much every aspect… well, except the core feature of being a relative clause.
First of, German does NOT have this notion of defining or non-defining. Like… it really doesn’t exist. That’s why German native speakers keep making mistakes with that when they speak or write English.
But German has its own tricky grammar for relative clauses.
And there are two aspects to consider:

Let’s start with the latter.

And here we go back to what we talked about in the beginning. We learned that the core feature of a relative clause is that it is attached and dependent on the thing it is referring to. We could also say, it is embedded.
And unlike many other languages, German actually has a very obvious way to kind of mark these embedded, dependent sentences – it moves all the verbs to the end.

Most of you probably probably know this about sentence with weil or dass or wenn or ob. Well, it’s the exact same thing for relative sentences.
Let’s look at an example step by step.

And now let’s combine the two again using a weil-sentence, just so you can see the structures are the same.

Cool.
So yeah… relative sentences are dependent, embedded sentences. They’re sub-level sentences, if you will. Germans kind of “marks” those type of clauses by putting all the verbs at the end, and so that’s the structure for relative clauses, as well.
I think most of you are more or less familiar with that verb at the end stuff. Maybe you don’t get it right all the time but you’ve understood it conceptually, and there’s not much more to say about it.
So let’s now get to the main challenge about relative clauses… picking the right pronoun.

In English we essentially had three choices (who, that, which) but picking the right one needed a bit of meta understanding sometimes.
German on the other hand uses the definite article the as the relative pronouns. Now you might be like “Oh wow that’s aweso…” but then it quickly dawns on you… of course I mean German uses ALL the various translations for the… der, die, das, dem, den.
The challenge is to pick the correct one for that, we need a special move, a move that we’ve learned as a kid. A move we make every day when crossing a street:

Yup, in order to pick the right pronoun, we need to look to BOTH directions.
First, we look left to the element we’re referring to. Because that is where we get the gender (and also the info whether it’s singular or plural) from.

The gender (and number of the relative pronoun depends in what it is referring to. This makes perfect sense so far and is nothing new. Oh and yes… it really is “das Kind, das…” and it would be “das Mädchen, das…“. It’s really the grammatical gender that matters, not biology.
Anyway, looking at these examples, you might be like “Okay, so we basically take the article of what the pronoun is referring and use that?”
But nope. That won’t always work.

It’s obvious that there’s a difference because also in English, we’re using who in the first and whom in the second sentence. But can you tell what the difference is?
As usual with cases, it is the role that’s different. In the first sentence, it’s the man who asked Maria for her number. He is doing the action, he is the subject. In the second example, it is Maria who is doing the asking, so she is the subject, and the man is being asked.
All this is nothing new either, the only important thing that might be a bit confusing at first is that it DOESN’T matter what role (or case) the entity has in the outside sentence. It is the role this entity has in the relative clause that determi… what the hell, I don’t even understand what I am saying.
So… what I mean is… just because your relative pronoun is referring to a Dative, doesn’t mean that you need a Dative version of the pronoun.
It’s the role WITHIN the relative clause that matters.

Cool.
So these are the two essential moves:

And to make it a bit more visual, I have created a little sheet for you. Took me 24 hours of Photoshop.

Oh and if you look really closely at this HD4k chart, you can see that there’s a comma between the thing and the pronoun. That comma is ALWAYS there, no if there’s one in English or not.
So yeah, now you know the basics of German relative pronouns. They really are not that difficult, and it’s more a matter of practice.
Now, but of course that wasn’t all there is to say. So in part two, we’ll do all the fine tuning and clear up all those little questions that might come up:

But for today, we’ve done enough.
If you want, go ahead and take the little quiz my lovely assistant made me make to check how much you remember. And of course, if you have any questions or suggestions just leave me a comment. I hope you liked it and see you next time :)

Oh and here as a little bonus a relative pronoun hack:

If you don’t know what to use… USE “DIE”!!!
It sounds the least odd and has the highest chance of being actually correct.

Part 2 can be found here: