In the season premier, we'll learn about the personal pronouns (I, you, ...) in German. And we'll run into two very annoying bits of German grammar :) 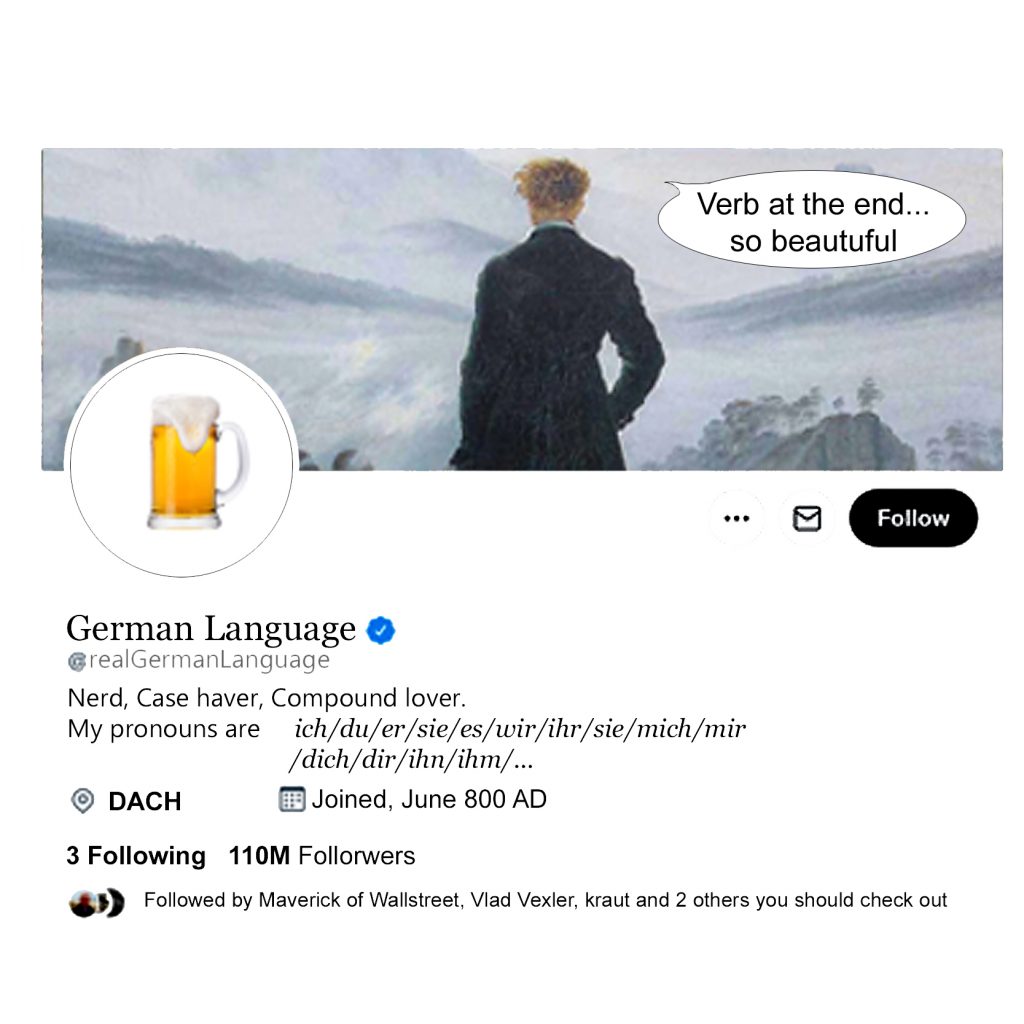 and welcome to the first real part of the YourDailyGerman online course.
Today, we will have a look at the personal pronouns in nomina… oh.. the grammar jargon alert just went off. So let’s just say that today we’ll look at I, you and the rest of the crew.

Why do we look at those first?
Well, for two reasons:

2) We’ll need them to conjugate verbs which we will do in the next lesson.

So here they are:

There are some differences between German and English but overall I think they won’t be too hard to learn. The only one giving people a hard time is the you all. For some reason, many people I have taught have had real issues with memorizing this one. But it is not the one you will need most, unless you intend to address an audience all the time.

Now, you might be like “Sweet, I got it. Where’s the next lecture.”
But there are a few things you absolutely NEED TO KNOW about the pronouns, and about German in general…. some really really awesome things (*I’m lying). So don’t stop reading here.

The words for she, he and it are really just the direct default translations. A situation that contains the English it might still be built with er in German. The reason for this are the German genders. There are three genders in German: feminine, masculine and neuter.  EVERY THING has one and you have to decide between er, sie and es based on this gender, not based on common sense or the fact that it would be it in English.
Will the gender of a thing make sense to you? Sorry, but no. They are basically random. A woman is feminine (die Frau, sie) and a man is masculine (der Mann, er) – so far so good, but a girl is neuter (das Mädchen, es) and a kitchen sink is feminine (die Spüle, sie). Let’s take an example.

This sentence would be translated as

which, when you translate it word by word, means

German is funny like that… haha.
And there’s more.
If you’ve studied a Romance language for example, like French, Italian or Spanish, you might be like “Oh thank god, I know random genders already. Finally this effort will pay off.”
I am sorry, but I have to disappoint you. German random is different to Roman random. The German sun is a bright, warm, life-giving, reliable woman – die Sonne.  And the moon is a pale, shy guy who is not always there for his kids – der Mond…. the Roman sun on the other hand masculine while the moon is a girl.
So you really have to learn the gender of everything you come across by heart. But don’t worry too much about it in the beginning either. There are people who are talk-show-fluent and yet their performance on genders is no better than guessing.
So bottom line… when you refer to a male human being you use er, for female humans sie and for the impersonal “it” (the one that “rains” or “smells bad” :) )  es but for the rest of the things you need to know the gender to determine which one of the three to use.

The second thing you need to be aware of is that there are 4 cases in German, which we’ll talk about in detail later. Much later.
Many people find the cases to be really annoying as they come with lots of single letter  changes. You can actually think of cases as different outfits. Each case has a function for example the business-case, the leisure-case and the party case. So whenever a thing or a person need to do business it will dress a certain way and put on a certain form of make-up. Of course this also applies to the pronouns as stand for a certain person. So each of the above mentioned fellows (Ich, du ect. ) of the personal-pronoun-crew has a case 1 -suit, and suits for the other cases. The words ich, du, sie, er, es, wir, ihr, sie are in case 1. They are wearing the “action-suit”. Why action-suit? Because they dress this way when they do stuff. It is actually the default suit. So pictures for the dictionary are taken with the action-suit. They are the ones who ‘do’ the ‘action’ of the sentence.

In the first example, you are the one ‘doing the action’ of being 24 years old while in the second sentence you only sit there while I do the ‘action’ – I ask. So in the second example the you is wearing its lazy-suit if you will. English does have some elements like this. ‘He’ also has a lazy-suit and becomes ‘him’. But German is more elaborate on that.
Now you don’t have to remember all of that. What is important to keep in mind is that the words of this lecture are dressed with their active-suit. They are in first case. The other dresses might look different, sometimes they are similar but this is nothing to worry about now. Why am I mentioning it then in the first place. Well I don’t want you to come to me at a later stage of this course saying “You said it translates to es and now all of a sudden it translates to weird stuff like ihm.” It is because it is wearing a different suit and different make up.

The third thing I want to say some words about is ‘sie’ – it means she and they but as if that wasn’t enough it also means you in a polite way. To your friends or people of your age you can say du, but your professor at university is certainly someone you want to address with Sie  as the casual du would be very impolite.

So lets recap what we have learned so far. The personal pronouns in singular are:

The plural ones are:

They are in case 1 so they are wearing their action-suit. The other suits might look similar in English and yet be different in German The words er, sie and es depend on the gender of the thing so they can’t simply be translated.

Now with these words we can move on to the verbs and then we already have enough material to build our first simple yet content delivering phrases.

Hope you enjoyed it and see you next time for … the verb.