der, die, das – how can I learn German gender… like… ever 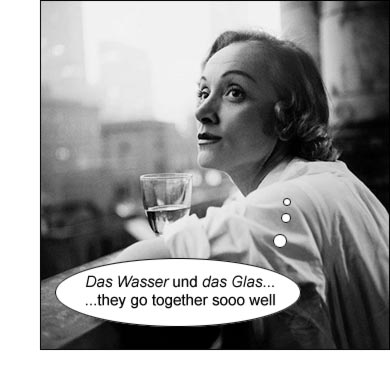 and welcome… uh… here. Today is not going to be a Word of the Day, neither will I discuss grammar issues other things. A few days ago a user posted a comment explaining a method for learning the German noun gender… you know.. linguists call it the “der, die, das – thing”… so…I started reading the comment and I thought
“… lalala gotta check my Facebook next, maybe there’ll be someth… wait … wait…  this is great… this is such a good idea… oh man, best gender learning advice ever!”
The method the user suggested seems so cool and useful to me that I finally decided to share it with all of you and I’ll add some other tricks that I know of.

So… German Gender is one of the things that frustrates learners right from the get go. The average human being has one gender… maybe 2.But 3? That would be really confusing. But German doesn’t care. German boasts its 3 genders and shows no sign whatsoever of dropping one. But the biggest problem is actually that the grammatical gender of something has NOTHING to do with what it is and also it has NOTHING to do with the grammatical gender of the Roman languages. They call the sun masculine and the moon feminine. In German, the sun is feminine and the moon masculine. To me, the sun is a “she”. “She” shines. “She” goes nova. When I speak French, I use the masculine form and say “le soleil” but that is purely mechanical; in my head it is still a lady. It always will be. Having a guy up there all of a sudden would be quite a change of my view of the world… like… you’re cat walking up to you and saying
“Hey uhm… I don’t like tuna, FYI”
and you sit there completely baffled and ask yourself ‘Did my cat really just say FYI ?’.
Anyway.. the whole point of this is that whether it is der, die or das is random for the most part and if you didn’t absorb it during your childhood, you’ll just have to learn it… and by  just I mean: painfully slowly despite investing an immense amount of time and energy and st… what’s that? Oh you want to get the tips already??… sure, no problem :)

So… first of, there are some systematics that you can easily learn… I don’t want to list all of them here because it would be just a copy of a list found elsewhere, so I’ll just give you a link.

Especially the die-section is great because it is really just “When it ends like this – it’s die” kind of rules and they apply to a lot of nouns that are part of the every day talk.

But those rules don’t cover all words and some of you probably feel that they have enough rules with the rest of the grammar and are seeking a more “natural” approach. And thus we get to the method suggested by the user in the comment. I’ll just copy paste it here because I am too lazy to rephrase it:

[….]  Here’s a trick I just learned (and wish I had learned when I was 13 studying Spanish): Every time you learn a noun, they say, learn the gender (el, la in Spanish; le, la, in French; der, die, das in German). Easier said than done. Until now. For German, pick one male person, one female person and something neutral, like your house. Now associate that object with that person. My dad is drinking coffee, that’s der Kaffee. My niece is holding a flower, that’s die Blume. I picture a window in my house, that’s das Fenster. It is amazing how much easier that makes it to remember. You’re welcome.

This is just great. Obviously I haven’t tried it yet, but it sounds totally convincing. It activates you vision and imagination and it puts thing into context. … all things that, learning theory tells us,  are tremendously helpful.
You can just pick 2 person and a house and then have the person do stuff and put things in the house…. and then you can watch that in your head like a movie. So essentially you can learn German noun genders while watching a movie…. use more persons if you want… even 2.243… then you can learn the gender while watching Game of Thrones :).
So… this was the advice that I thought you all should now and full credit goes to … Anonymous…. he or she didn’t enter a name, but it doesn’t matter anyway.
Thank you so much for sharing!!!

Now to wrap here are a couple of other things you can do. If you are using flashcards or vocabulary lists (which I recommend) then get 3 text markers in different colors and color all the nouns. This won’t do that much, but on the other hand you don’t have to do that much either and by having the colors there you are automatically activating more of your brain then without color. And the more divers neurons you active the higher your chances will be to successfully recall the gender later.
If you are more of an audio person you could also say the nouns in different voices. Say the female ones with a high pitched voice, the masculine ones with a male voice and the neuter ones with a robotic voice while you learn them. Again, this doesn’t do much but you will have more of your brain activated while memorizing. Imagine you have said die Tür with a very high pitch like 10 times in 2 days. Then, you need to remember the gender of Tür at some point. Then, chance are very high that the high pitch version feels more correct than, say, the robotic one, which you have never produced or heard.
And then finally, you can also add motion to it. A simple version is to mirror the pitch with your arm. So while you study, you raise your arm for the female nouns, you point to the floor for the masculine ones and you so something else for the neuter ones. Or you can come up with a little gesture that is typical for the gender… like flex your arm muscles for masculine, play with your hair for female and so on. Or you take a different approach and say your left side is the female side, your right side is the masculine side and the legs are neuter… and then you do a gesture that is related to the noun with the respective body part. For das Auto you could virtually push the pedal, for die Tür, you can ring the bell with your left hand or something… again, this won’t do that much but increases the chance for a successful recall.

So… nothing of this is a sure shot “You will know the gender of every word without doing anything” and of course everyone is different and some thing will work for you and others won’t. So if you don’t feel like trying out the voice thing… well, don’t worry… then it is just not what you need.
But I think the method the user suggested really can work wonders for many and you should definitely give it a try. And oh… be patient and give it a week or 2 to get into the groove. Also learning has to be learned :).
All right. I really hope you found some of this helpful. Let me know in the comments what you think of these tricks and how you go about learning the gender. If you have some cool tactics please share them with us. Or do you ignore the gender completely… which is not the worst approach I would say. Either way… hoping that you liked it I’m out and I’ll see you next time…. what an awkward phrasing.