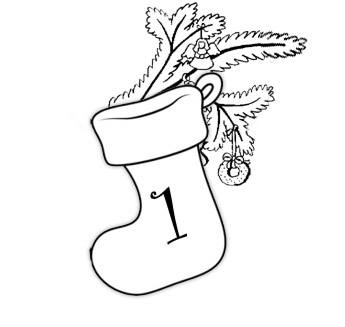 From today till Christmas, you’ll get a neat little bit of German every day. Grammar, slang, idioms and other cool stuff.
A few weeks ago I asked you to send me your questions and suggestions and you came up with loads of cool topics and ideas. Unfortunately not all were a good fit for the calendar. Some would have been a bit too extensive and for others, I just didn’t have anything to say. Like, “my favorite German comedian?”. I don’t even know what a “German comedian” is. So, I took some of your suggestions, and mixed in some of my own ideas and I think the result is really, really cool and you’ll never want Christmas to come (insert “even more” if you’re a Christmas hater.
But wait, there’s more. You don’t only get a cool infusion of German every day, you can also win a little something every day!
From all the comments on the day’s post, I’ll pick one who gets a little surprise that’s related to either learning German or deep sea fracking (haven’t decided that yet). Oh and if your question made it into the calendar, then you’ll win something, too.
So yeah, stay tuned and check in every day because it’s going to be awesome.
(By the way, you’ll get an email everyday. Hope that’s not too annoying. )

And today we’ll start with one of the cutest winter poems ever about three sparrows.
Viel Spaß :)

In an empty hazel bush
three sparrows are sitting, belly to belly

The Erich right, Franz left
and in the middle the cheeky Hans

Their eyes are closed, completely closed
and above it, it’s snowing, uhhh.

They’re hearing all their three little hearts’ beating.
And if they’re not gone, they’re sitting there still.

So cute.
This poem is by Christian Morgenstern, a somewhat well-known poet from the early 20th century and it’s a good example of his style – cute, light hearted and full of language wit. If you liked this one, you should check out more of his works. Which brings us to today’s give-away.

You can win one hard copy of Christian Morgenstern’s book with children’s poems. It’s called “Liebe Erde, liebe Sonne: Ein Kinderliederbuch” and it’s about the seasons of the year; and in addition to the poems, it also has really, really lovely illustrations.
Just leave a comment with your own little winter poem in German. It doesn’t need to be fancy or anything, just a little something :). I won’t pick a winner until two weeks from now, so you can take your time.
Oh and if you’re not sure if it’s worth the effort (or if you end up not winning) … the book is also online (legally), so you can check it out here at his homepage

So, this was day 1 of our Advent Calendar. If you want to win the book, leave your own winter poem in the comments. I hope you liked it and see you tomorrow!