A fun look at the German word "hin". We'll discover its core idea and how to use it and we'll learn about German's secret OCD. 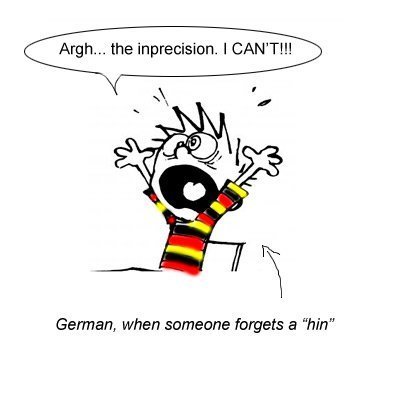 and welcome to our German Word of the Day. And this time, we’ll take a look at the meaning of one of your least favorite words…

Hin is really confusing for a lot of learners and even advanced speakers often make mistakes with it. Or better, without it. Like here…

This is wrong, it should be:

Forgetting hin is a really really common, I’m sure many of you have made it. And even though you’ll still be understood, a missing hin sounds quite bad and really really ruins your language swag. Kind of like this:

It’s just a letter, it’s understandable, but it sounds like I am an A2 student.
Today, we’ll take a thorough look at hin and see what it does and why it sounds so bad if you forget it. And we’ll talk about its weird nature and how it can’t quite decide whether it wants to be a prefix or not.
So, are you ready to jump in?
Let’s go…

The purpose of language is ultimately to convey information – of any kind. Be it facts, opinions or feelings. There’s an unlimited amount of information to choose from and for the most part, what we say depends on what we … well… want to express. But to an extent, it also depends on the language we’re using. Because each language has a different focus on certain aspects of reality.
Arabic for instance finds it really important to make a grammatical distinction between “you two” and “you many”.
Japanese and other Asian languages abound with information about the status of the speakers in relation to each other.
Many of the Slavic languages really care about whether an action is brought to an end (perfektive) or not and English, while generally quite easy going, does care about whether something is ongoing or not.
And German?
Many of you are probably now silently screaming “gender”. And yes… German does care what grammatical gender a freaking chair has.
But besides that, there’s another area where German cares a great deal to be precise.
And that is … location.

Courses and textbooks usually don’t talk about that, because it’s not generally considered “a thing”, but German actually makes a big effort to be precise and explicit about spatial relations. All those prepositions, the two way prepositions, hin and her… all these are symptoms of German really caring about being precise in that area.
And there’s one aspect in particular that German really is kind of OCD about and that is… OCD!
The distinction between origin, current location and destination.
Well, actually it’s mainly the distinction between current location and destination, but then it wouldn’t be OCD.
Anyway, let’s look at an example in English:

Obviously, English also expresses that by using prepositions. But in comparison with German, English (and many other languages) are pretty chill. In particular, they don’t bother with the distinction between destination and current location.

English leaves this up to Captain Context and he does a pretty fine job.
German on the other hand can’t help it but to make it explicit, resulting not only in it being super clear, but also in a massive headache for learners because they have to deal with seemingly pointless bits of grammar.
One tool German uses for that are the so called two-way prepositions.
Just in case you don’t know what those are, here’s a fictional example with a fictional character…

Both sentence translate to “Thomas vomits under the table.”. But the Dative in the first one marks “under the table” as a fixed location, where the vomiting takes place while the Accusative in the second one marks “under the table” as the destination of the vomit. This is gross, by the way. I really need to have a talk with my peons… erm… I mean interns.
Anyway, so yeah… these two-way prepositions are one way for German to make clear whether or not something is a destination.
And another important tool is hin.

The core of hin

Hin is a cousin of her and hier and together they form a trinity that is kind of similar to the OCD one we just learned about.

The first sentence says that I’m jogging to here, the second sentences says that here is where I do my running, and the last one expresses that I run to there from here. As you can see in the translations, English doesn’t mark these things.  The first two sentences are the same and we’d need context to tell what they mean. And the last sentence could also mean that I do my running there.
In German, it’s clearly marked whether we’re in one location (hier) or not  (her, hin) and where the new location is.
Now, technically her and hin both express directed motion. But her has this vibe of inward, toward the speaker and in essence it’s only referring to one location: here. Sure, “here” can be anywhere but in any situation there’s just one of it.
Hin on the other hand with its notion of outward, away from the current location can refer to any location other than here. So it’s much more general. And that’s basically its core function:

Hin is used to establish a generic destination that is not “here”.

And that makes it a very useful word because we’ve learned just how important this is for our favorite language (German, I mean German).
Now, hin can be used in two slightly distinct ways. The first one is as a sort of destination-tag.

When people want to say this in German, a LOT of times they say

All the words are translated correctly. And yet, it’s wrong. And with what we’ve learned about German’s OCD, we can understand why.
You see, the German word da is a metaphorical pointer to a location. Just like there. The problem is that it can only answer at the question “at what place”.
The sentence, however, is obviously about me going to some place. So the location is in fact a destination and giving an answer to the question “to what place“.
You’re probably like “Okay… so what.”
And English is like “Yeah, whatever, it’s fine.”
But German REALLY flips its shit.
“WHAT?! You’re trying to answer to what place with an element that answers at what place?!?! OMG, this is outrageous! I … I’m out of words.”

And that’s what we need hin for.

Hin is basically like a hashtag #destination that’s added to the static location da.
Here’s another example.

Again, the sentence involves a destination. But hier by itself only indicates a fixed location. The directional part is missing and we can add that by using our little tag hin.

Now you might think like “Ah okay… so I’ll add hin whenever there’s a destination.”
But not so fast, young Jedi. Work that will not.
Take this sentence:

It’s the same as the one above, only that I’m serious about my fitness goals this time around, and there’s this really hot Pilates trainer there. She is so freaking gorgeous it’s unreal. Makes me get off topic if I even think about her. Where was I… oh yeah… hin.
So yeah, the other difference in the example is that we now replaced the generic da/there with an actual location (the gym).
Now what would you say… which of the following translations is considered correct, or at least idiomatic. Number one, number two or both?

The answer is… only number one is considered correct.
Why?
Well, for one thing,  the location is already unambiguously marked as a destination by the preposition (and case) we’re using.

Those two phrases are clearly destinations, they answer the question “to what place” , so there’s no need for an extra marking.
But the bigger problem, the thing that makes it sound really weird to add hin to that is the fact that hin isn’t only a tag – it can actually be a destination itself.

This sounds wrong, right?
The reason is that to put involves a location, a destination to be precise. It wants an element that answers “to what location/whereto” but no such element is in the sentence.
You could add it by saying “on the table“ for example. But there are also more generic options you can use

And in German, the most generic option for a destination is … hin.

As you can see, hin fills up the “whereto”-slot of the sentence. And now we can understand why the sentence we had earlier sounds at least weird.

We have two fully functional, complete sounding answers to to what place here: ins Fitnessstudio and hin. And that sounds weird, and often wrong.
Cool.
Time for a quick recap:

Hin expresses the notion of “destination (other than “here”).
It can add this notion to words like da or hier, which by themselves can only answer “at the place”.
And it can be used to “fill” the “to what place”-box by itself.

This is pretty much all you need to know if you want to understand what hin means and does.
What we haven’t talked about yet, is the grammatical side of it.
Is it a prefix? Is it a stand alone? What about wohin? Is it da hin or dahin?
And that’s what we’ll talk about in part two.
Yup, that’s right… we’ll take a break here :). Originally, I wanted to do it in one post, but besides grammar, I also want to go over the most common phrasings with hin and I realized that all of it together would have been a little too much for one article.
So, for now just let that sink in and test yourself in the little quiz we have prepared.
And of course, please ask all your questions and your friends’ questions in the comments and I’ll try to clear them up. Oh, and let me know if you found this clear and helpful so far. Using hin correctly isn’t the most crucial thing in terms of being understood but it makes a huuuuuuge difference in how your German sounds, so it’s really important to me that you understand what’s going on.
So yeah, let me know your questions and feedback in the comments.
I hope you liked it and see you next time.