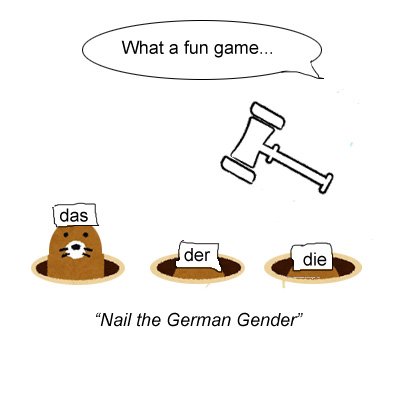 and welcome to your favorite German learning site ever. And no, everony is not a mistake. It’s Italian based slang term meaning friends or guys. And it’s also a type of pasta. Everoni with butter and parmeson… soooo tasty.
Yeah, I bet you can tell I am in nonsense mode today. But no reason to worry that the article is rife with nonsense. Because it’s actually not mine :).
A few years ago, back before the Corona stuff and all, we had a guest here. Slavica, an actual studied linguist told us a bit about collocations in German. You everony (guys) seemed to have enjoyed it, and so we decided to do it again.
Today, she will talk a bit about the elephant in the room of this blog… German gender. I barely ever talk about it. But it’s there, and it’s important.
She’ll share a bit about what it is, a few rules, and a couple of her learning tricks that she used when learning German.
So without any further ago… have fun :)

Thinking about German Gender
(by Slavica)

Once upon a time, there was the mighty Mr. Sun who lived up in the sky with his lovely, gentle, quiet wife Mrs. Moon and their many daughters, the stars.

When I was little, this is how the Astro-bunch was represented in fairy tales. I had never questioned the logic behind these personifications and back then it had always occurred natural to me.
But, say I want to tell this story to a native German speaker. That would be a bit of a challenge because in German, the Moon is referred to as a “he” (der Mond), and it is somehow weird to assign it with the role of a woman. So it would not be easy to keep the essence of the story. In other words, the Moon, as a noun, is not universally feminine, or anything at all.
In some languages, such as German, it is a “he” , in other languages, such as Spanish, it is a “she” (la luna).
And then there are languages, such as Mongolian, Japanese, Chinese or even English, in which the Moon, or even most nouns have no gender.
Before continuing, in order to avoid misunderstanding, first things first: What is meant by gender?

Gender in the German Language

German is a language with three noun categories in terms of gender classification. Learning this classification system is essential and should start from the very beginnings of your experience as a learner.
When I first started learning German at school, I can’t remember our teacher mentioning we needed to memorize the article with the new nouns. (To be fair, she probably has, but I had probably been daydreaming at the time.) So, in my notebooks from the German beginner classes, you won’t find any nouns written with the article preceding.
Huge mistake.
I did learn that a tree is “Baum”, but it remained “DAS Baum” in my mental dictionary, because that’s how it is in my native language. The same with book – it remained DIE Buch. And bread has been DER Brot for a long time. And there were many others, of course all WRONG.
At some point later (too late), when I realized how important gender is for proper German, there was so much I needed to relearn.
Mastering gender classification in German does seem like a mission impossible, but it is fundamental if you want to to speak proper German.

So speaking proper German means learning the grammatical gender.
Nevertheless, it takes an enormous effort as well as a great deal of patience and willpower to learn it.
The der, the die and the das…how do you tell which one a noun is stuck with?

Are there any rules? Grammatical Gender in German is not rarely taken up in linguistics. They attempt all the time to find a system in the grammatical gender in German. But up until now, I haven’t bumped into the one study that would give me the AHA moment.
There are lists and criteria that do make sense, but they come with a lot of exceptions, and often you’d be better off not trying to memorize them.
There are some pretty bulletproof rules** though, that are worth knowing. Here they are:
(**might not be bulletproof and might not be rules, we take no liability :D)

So, these are the few rules that should never let you down once you have internalized them. However, they include only one portion of the German noun system. For the rest of the nouns, I am afraid there are no patterns or rules. You just need to sit down and engrave them in your memory somehow.
But how do you do that without losing your motivation or your mind?
In the next part I will share two of my own strategies. Which are not perfect, but, honestly, I would do anything to avoid learning by heart.

OK, first and foremost, before putting the effort to internalize German grammatical gender, a crucial step is setting aside what we already know from our native language, i.e. letting go of our intuitive knowledge. This especially goes for native speakers of Romance and Slavic languages.
True, this is easier said than done, because grammatical gender (if it exists at all in your native language) is acquired along with the noun.
But when learning the gender system in a new language, the knowledge of the native language can only hold you back in your efforts.
After all, learning a foreign language means reshaping your mind and changing your perspective. Just accept the items with their gender the way they are in German. Never question it. The trick is, never try to find the logic why the door, the wall, the kitchen are a “she”, the house, the window, the roof an “it” and the cellar, the space, the table, the floor, a “he”. As Marc Twain, himself, concludes, and my Professor, a native speaker of German, recommends, you are better off not trying to find any logic.

My first strategy is simple personification.
Just like in the fairy tale with the Sun and the Moon: you imagine objects with personality features.
The idea is not that ludicrous. I actually did come across a study in which the researcher asked the participants to assign characteristics to objects, such as a bridge for example. Interestingly, native speakers of Spanish have described el puente (a “he”) as large, dangerous and mighty, whereas the German die Brücke (a “she”) was represented as nice, fragile, elegant, peaceful and pretty. Another part of the experiment was connecting items with names. For example, the door called Anna or the desk called Peter. Here as well, the results in the German group were different from the results in the Spanish group in the end. This tells us that natural gender is subconsciously associated with sexless items because of their grammatical gender. So, let your fantasy go wild and just as in Disney’s Beauty and the Beast let objects come to life.

Another strategy I use is similar to the memory palace method: making category spaces and sorting the items in each category according to their gender.
For example, you have the category das Haus. Das Haus has rooms, floors, ceilings, roof, walls, windows, doors, etc. The category house has then a number of interior spaces: living room, kitchen, bathroom, hallway, etc.
What you do is assort items specific to each category space according to their gender. So, on the one hand you have, der Tisch, der Stuhl, der Teppich, der Schrank, then you have das Bett, das Regal, and a third bunch would include die Couch, die Lampe, die Kommode, etc. Depending on the type of learner you are, adding color coordination would be even more helpful.
This method is applicable for every type of category: food, feelings, traffic, entertainment, clothing, you name it.

One last trick. Compound nouns. They are true life savers when it comes to learning gender in German. For example, if you have learned that Tisch (table) is always der, you have automatically learned that Esstisch (kitchen table), Couchtisch (coffee table), Schreibtisch (desk), Nachtisch (dessert) and so on are all der. Shell nouns, such as das Zeug, seemingly inferior and meaningless, are in reality very convenient because they are so productive. From the empty vagueness of just das Zeug (thing) you have das Werkzeug (tool), das Flugzeug (airplane), das Schreibzeug (pen or pencil), das Schlagzeug (drum), das Spielzeug (toy) or das Fahrzeug (vehicle).
Another really nice “noun builders” is der Stoff (material) with words like der Wertstoff (recyclable), der Klebstoff (glue), der Treibstoff (fuel).
One weird exception that threw me off is Teil: we have der Teil (share, amount, part of) as a part of a larger whole (der Teil der Stadt / Stadtteil (city part)) and das Teil as a single item, like das Bauteil (the building component), for example. So here, we have to think a little. But overall, compounds are really easy with regards to gender.

Now, these points are only a few thoughts and tips.
There is so much more to be said and explored about the category gender in German.
I personally have been reading up on the topic ever since I became aware of it, and it is never enough. I am still having trouble remembering the right article for Geschmack (taste), Geruch(smell) and Geräusch (sound), was it der oder das.
Gender is not an easy category to master and it is definitely not to be underestimated. Aside from the few formal rules, for most nouns, there is no explanation why they are a “he”, a “she” or an “it”.
What I wouldn’t do though is rely on my intuition and what I know from my native language.
Imagination and an open mind help much more here.
So, next time you take an orange in your hand, picture it comes to life. Just imagine the die Orange speaks to you. What kind of voice do you think it would have? What name would you give the orange: Martha or Martin?
This would be an interesting experiment. I’d be really curious to know the answer of different native speakers. And even more I would love to read about your thoughts and experience with German gender.
Any methods or strategies for learning gender you could share?

So that was it :). I hope you guys liked it and I’m curious for all your feedback in the comments.
I think, I’ll actually do a follow up this week and we’ll also do a little exercise. Till then, have a great time and stay positive.
I… I mean, mind set wise. Not… not the other positive.
Oh man, what a minefield.
Anyway, have a great week and see you next time.

further reading (on this blog)

How can I learn the noun gender (some more tips)