A new kind of case chart 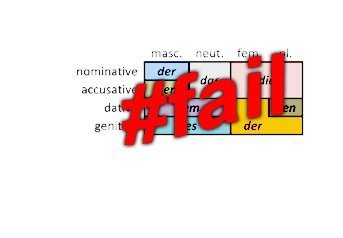 and welcome to… well… I don’t actually really know how to call it. It’s something really silly, but also really cool.
So… I was working on the article on relative pronouns that I wanted to post this week, when I suddenly ran into a problem.
I could tell you the problem now, but hey, see for yourself…

Now you’re like “Okay Emanuel… Case Fidget Spinner… we get it. You’re joking.”
And of course the video was a bit over the top.
But there is a true core to it. I really do hate case tables! They stand for everything that I DON’T like about language learning. And as stupid as this might sound to you, the thought of having one of them in one of my articles made me cringe and I decided I will try to do it differently.

Tables are no doubt the established way of displaying case forms. That’s what everyone does, and that’s how it’s always been.
But it’s not the only way.
If you think about it on an abstract level, case endings/forms are essentially just a bunch of data we need to display. And like with any data, there are various ways to do that. One of those ways is a table. Like a spreadsheet. They’re fine if the purpose is to store the information, so you can look it up. But from a visual standpoint, they’re pretty poor. I mean… in statistics we use all kind of visualizations (pie charts, graphs etc) just to NOT look at a table.
People always say that they’re learning the case tables. What that means is essentially, that they’re a visual image with ALL the details in it. But the tables are not a visual image. I mean, they are, but that’s NOT their nature.

So what I tried to do was to display the information about cases in a way that is based on visual principles rather than a grid of columns and rows.
And I’m pretty satisfied with the result, I have to say.
Here’s the chart for the definite articles: 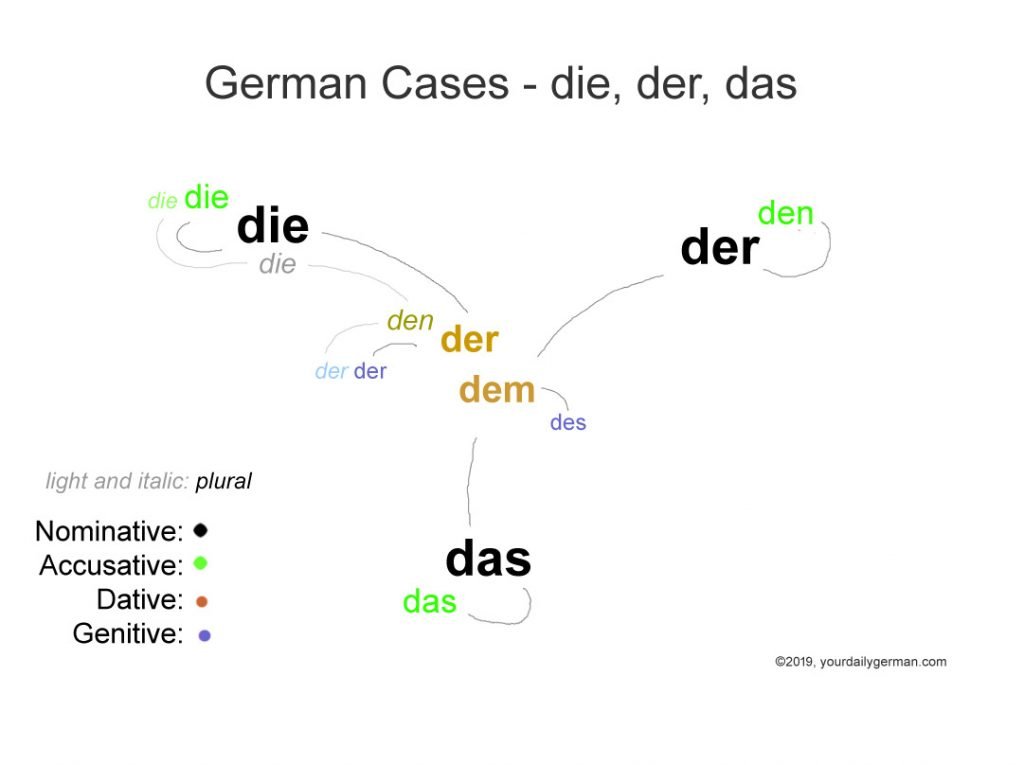 And here’s an overview how to read it:

Your initial reaction might be a bit negative and you might be really confused. But as I said… there is no deeper reason to organize the information in a table and the main focus for me was the question:

is it easy to process on a visual level and maybe nice to look at?

And why? Because I think it’s easier to recall from memory than a table.  If you look at both these pictures for 20 seconds, which one are you more likely to remember better, overall?

Sorry, for making this so small… I was in a hurry. But I hope you get my point. Both charts contain the same information, but they’re completely different on a visual level.
And no, I didn’t pick a particularly bad table. This one is from English Wikipedia, so it’s supposedly one of the “best”.

And the best thing is, that you can use the same template for lots of case-charts.
Here’s one for the indefinite articles (those don’t have a plural) 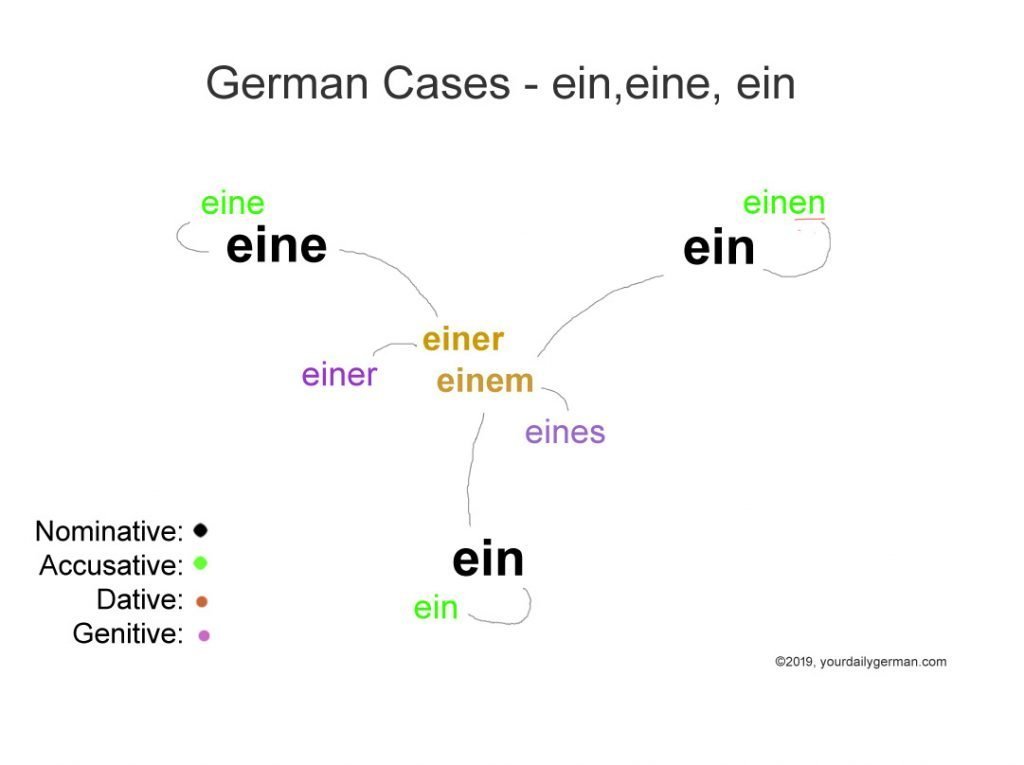 And here’s one for  er, sie, es  (I actually forgot the plural, but technically, it’s just one extra ihnen for Dative ) 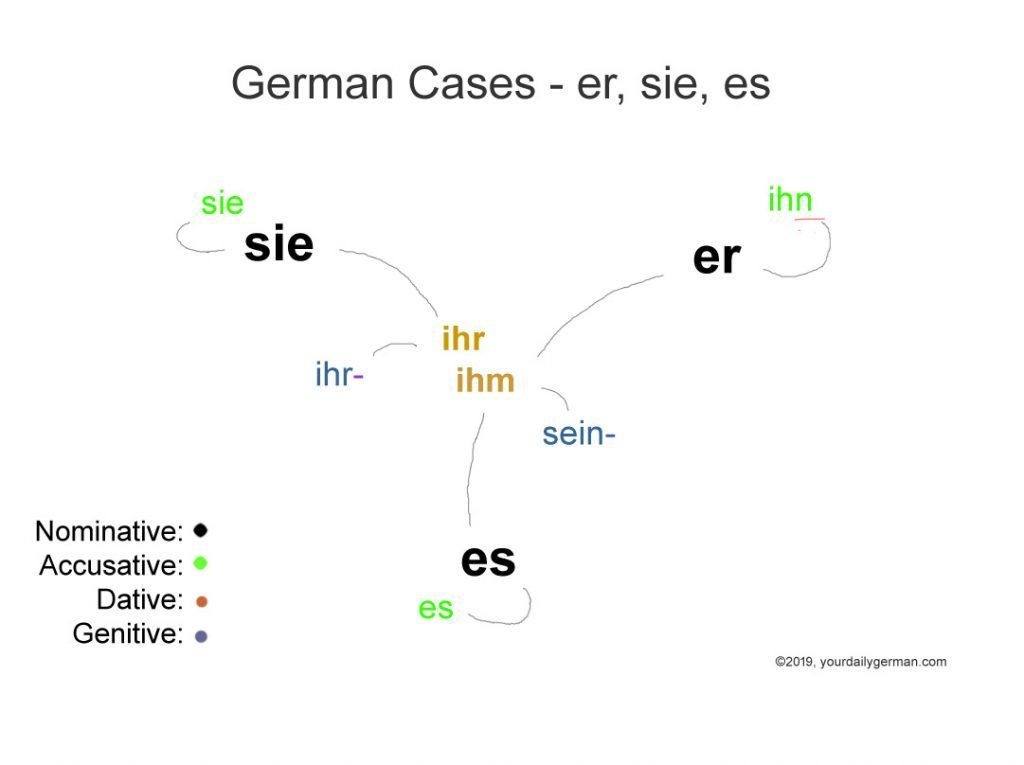 Again, if you’re used to looking at these tables, then part of you is probably rejecting my charts, but if you can let go of it, I think these charts are really helpful because you can easily remember them visually.

But of course I am not learning German :). So I’m REALLY curious what you think about them? I was really really excited when I got the idea for the layout, but maybe I’m completely off. So please, please let me know in the comments what you think. Do you like them? Do you think, you can recall them in your mind when you need a case form? And what’s your opinion about tables? Did you ever try to actually learn one?
Let me know all your questions and feedback in the comments.
Can’t wait to read it.
Now that I have my chart, I can get back to the article on relative pronouns, so that will be coming up soon :).
Have a great week und bis bald.