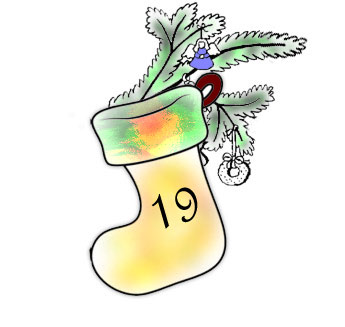 happy 4th Advent and welcome back to our Advent Calendar.
And behind this door is the German word for something that’s part of the later stages of many a Christmas dinner.
Because at some point, the conversation will pivot toward … politics. Or the ‘rona. Or someone’s life choices. Or just some old baggage from last year. Things get heated quickly (and I don’t mean the food) and especially if alcohol is involved, it is only a matter of time till someone starts with what we’ll look at today:

And I think you might have guessed it.
fluchen means to curse.

The origin of fluchen is the pathetically ancient Indo-European root *plāg-. The very core of that root was actually beating, a meaning that is still alive for instance in the word plectrum – the thing you “beat” the strings of your guitar with.
But very early on, the root took on the sense of crying, lamenting. Which doesn’t seem connected at all, until you think of this dramatic movie lamenting where people pound their fists against the wall or their chest.
That’s where the meaning came from, and it’s the origin of а Slavic stem for crying (like тхе Bulgarian плача for example), and of the Latin plangere, which we find in the Romance languages as to cry and which is also the base of the English to complain.

And that’s also where German fluchen is from. Sure, it is a bit on the “angrier” side, as Yoda would say  “Anger of expression an grief is.”
Wait… is that right? Anyway, you get the idea.

Now, since we’re talking origin, let’s also look at the English side real quick, because that’s also quite interesting. It’s not entirely sure where the verb to curse comes from, but one theory connects it to course and the Latin verb cursus and it might have started have started from the idea of saying  a set of daily liturgical prayers. And especially in Italian, cursing does involve a LOT of religious words, so that would make a lot of sense.

Jesus Christ, can we NOT argue at Christmas dinner for once?!

I mean… the only difference really between this being cursing and this being a prayer is tone.
And the other word, swearing – well, that’s a weird one as well.

I mean… we really only know what it means from context.
The connection here is probably the use of sacred names while actually swearing something, and then, as the names got used for cursing, the verb to swear took on that meaning as well.

Anyway, time to get back to modern day German.
And today, fluchen generally means to curse in the sense of  throwing around swear words.

The noun der Fluch, however, is a bit different, because its main meaning is the curse in the more “witchy” sense. Like, what the evil queen did to Snow White in Disney’s famous movie… Lion King.

And the verb for this type of cursing is verfluchen.

And speaking of verflucht – that can also be used as a colloquial intensifier.

Not very common, but you could give it a try at Christmas dinner… you know… makes for a nice foreshadowing for later when you talk about vaccine mandates and fun stuff :).

And I think that’s it for today.
If you have any questions or suggestions about fluchen just leave me a comment.
Have a great day and I’ll see you tomorrow.