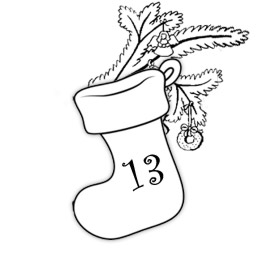 welcome to day 13 of our Advent Calendar and again we’ll up our colloquial game a notch, with the expression:

Treten means to step, Fett is fat or grease and Näpfchen is a small version of a Napf.

Today, Napf  is pretty much only used for the bowls pets eat from but back in the day it was a bit more general.
So, we have the literal translation “to step into  a bowl of grease, which begs the question: why would one do that? Was that some kind of beauty craze back in the day? Well, no.
Hundreds of years ago peasants would smoke and dry their ham and sausages on the ceiling of the room where the stove was. The thing is, heat makes meat sweat out grease and because that grease was precious to them and they could use it for a variety of things, they caught it in a little bowl.  That’s the Fettnapf.

And at night, with only the moon or a candle providing light, someone would step into this bowl or kick it over. Gross for himself, annoying for everyone, because it was a mess on the floor and the grease was lost.

So, stepping into the Fettnapf was definitely one of those “Oh crap, why didn’t I pay attention”-moments. And that’s what the expression is still used for today. Just that it’s not actual fat bowl you step into.
Germans say that you “step into the grease pot”, when you accidentally say (or do) something that hurts someone’s feelings or spoils a secret they wanted to keep. Like… you’re at a party telling all your politically incorrect jokes about French people when you find out that three of the guests are French. Oops!  Or you ask a female coworker you haven’t seen in a while when the baby is due but…  she actually isn’t pregnant. Uber oops. That’s more like a whole pool of grease, actually.
It’s not used for really serious stuff, just for these embarrassing every day gaffes people do.
Let’s look at some examples for how it is used.

I’m not sure if my translations are any good. I took them from a dictionary but I don’t really trust these very much with this anymore.  So if you have suggestions or if the concept isn’t entirely clear yet, let me know.
Cool.
So this is ins Fettnäpfchen treten and now I would like to know… what’s your favorite Fettnäpfchen story? Like… did you make a really big blunder recently? Or a friend? Let me know in the comments below and win today’s giveaway.
Ich freu mich auf eure Geschichten. Schönen Tag und bis morgen.