All three words are translations for "different" and mixing them up can actually get confusing. Today, we'll learn when to use which, and why :). 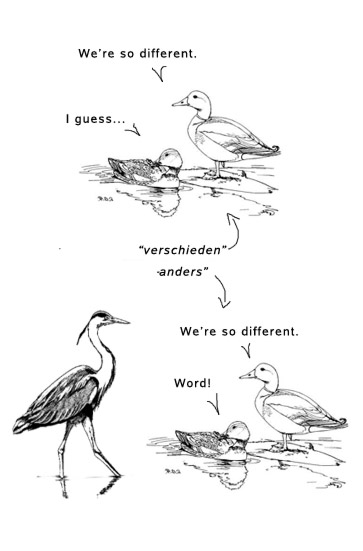 and welcome to something we haven’t had in a loooong time… a  “What is the difference”-special. And today’s special is especially special , because we’ll look at the differences between the different German words for different.

How does that sound to you, studio cat?
“Mrrreeeeow!”
Studio cat approves. Perfect.
And before I confuse you more, let’s dive right in into the wonderfully colorful world of differences…

The different words for different and knowing when to use which is a problem for many learners.
The good news is that there is a very clearly defined distinction – at least between anders and the other two.

anders vs. the other two

Imagine you have two sets of something – Set A and Set B.

Anders is about comparing items of one set with items of another set. It looks “external”.

verschieden and unterschiedlich are about comparing items WITHIN one set. They are “internal”.

And that makes total sense when you look at the origin of the words….

Anders (and of course also andere/n/m/r/s) as well as the English other come from the a turbo old root that was about…  the other one. In an us vs them kind of sense. There’s our tribe and the other tribe.

Unterschiedlich and verschieden on the other hand both belong to the family of shed.
This family is actually super crazy and you won’t believe what words belong to it. But we’ll actually do a whole post on it at some point, so for today, let’s just say that words with shit in them are abo… wait, I mean words with schied in them… gee, I think I just spoiled something. But yeah, words with schied- in them are about discerning, telling apart.
And that’s typically what you do WITHIN some sort of set – you try discern elements further. That’s literally the original idea of the word science, by the way – I wonder what that might be related to.
Anyway, let’s look at this in practice with an example.

Let’ do another example

Again, we have no context here so both versions are possible. Can you guess what the difference is?
Exactly, the first version means that I tried other things than someone else. The second version merely means that I’ve tried a bunch of things that were somewhat diverse.
Cool. Another one? Yeah, let’s do one more.

I’m pretty sure you got it right: the first version means that Maria and her sister are different than some other group of people, maybe some other pair of siblings. The second one means that Maria is very different from her sister. Anders groups them up and compares them with an external set, verschienden looks for differences within the items.

Now, in the examples we had so far, both option were possible. But that’s not always the case. Sometimes the context only allows for one.

Okay, this is not exactly a lot of context and still we only have one option here:

Why? Well, it would sound quite odd to use verschieden here because we only have one item in the group. I mean how can it be verschieden… it’s only one. No, anders is the way to go and it compares Pink Flash from Hell with all those boring stock bikes out there. What?… Pink Flash? Oh.. uh… that’s just the name of my bike. I didn’t mean to say that. Try to ignore it, okay?

This one is not as clear as the one with the bike but still context strongly suggests that we need verschieden. The goal of the sentence is very likely a comparison of talking and doing. So we are comparing two items of one set. Technically, we could say andere but then everybody would be like “Different than what? Sleeping?”. Andere would bundle them up and compare them to something external while verschieden looks for difference between them.

Verschieden is the ge-form of the verscheiden but that is super rare and has nothing to do with differences anymore. Unterschiedlich is based on the noun der Unterschied. Der Unterschied means difference and it’s based on the verb (sich) unterscheiden, which means to differentiate, to be different. But they’re definitely akin. If one doesn’t work, nor will the other and as a matter of fact, on a superficial level, on a level of meaning, the two are interchangeable.

The difference between the two is not the meaning but the “feel”.
For one thing, the words vibe kind of mirrors their sound. I know this might sound stupid but bear with me please. Verschieden sounds rather straight forward, orderly and direct. At least compared to unterschiedlich, which is all over the place. U, A, sch, I, d, l, ch. The tongue has to move around a lot here. Like a butterfly. Yeah, that’s a nice image… verschieden is the flight of a bee, unterschiedlich is a butterfly. Both are erratic but the latter is a lot more chaotic. And that’s kind of the vibe of the words.

This sounds like a bunch of idea, that are somewhat different from each other.

This sounds a little more like the result of brain-storming – or at least a little tiny bit more random.

The second one sounds like a more eclectic collection to me. I don’t know… maybe that’s just me though and other German speakers don’t feel that.
Anyways… there’s another difference between the verschieden and unterschiedlich.
In the example with the Baltic Sea weather we’ve seen that both words can carry the idea of divers(e). like… I have a bunch of diverse items in the group.
But sometimes we have groups within a group… uhm… yeah… I don’t know what that’s supposed to say either. Quick, we need an example:

Unterschiedlich leans toward the second while verschieden could express either.
But this is really more of a nuance and it rarely comes to bear.

Here, the context leaves little doubt that we’re comparing his ideas to her ideas and they’re different.
So, bottom line…  unterschiedlich and verschieden are not exactly the same but the differences are small and rarely affect the meaning so you shouldn’t worry about it too much.
What really matters is that you understand the difference between verschieden and unterschiedlich on the one hand and anders on the other. Anders compares to something external, something that is often not part of the sentence. The schied-words look at the elements inside a group and try to discern them, make out differences between them.
Here’s a somewhat more practical rule of thumb

Use verschieden-/unterschiedlich- if you can replace different with divers(e) without completely altering the meaning.

And that’s it for today. I’ve prepared a little quiz for you so you can try out what you’ve learned. And of course if anything is unclear just leave me a comment.
I hope you liked it and see you next time.

I’ll give you an English sentence and you have to decide which of the three German words fits best.
If you want, you can also practice translating them.
The German version is in the hint, as well as an audio with the solution.