A fun look at the meaning of "die Steuer" and its brother "das Steuer" and the surprise connection between steering can taxation :). Also: a mention of "lenken" 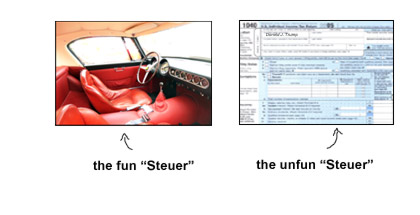 and welcome to our German Word of the Day. This time we’ll have a look at the meaning of a word for something that many people are behind and against…. AT THE SAME TIME!!!
Ohhhhhh… so mysterious :).
“Well, actually…  I can just stand behind a tree and lean against it. No big deal.”

Shut up, inner critic. You’re ruining my intro.
“Just sayin’. It’s not all that myste…”
Well, how about this then: the word we’ll look at today has two totally different meanings and you have to pay one for the other. Is that mysterious enough for you?
“Hmmm.. yeah, that’s better. Although… “
Gee, whatever. Today, we’ll look at


There’s das Steuer and die Steuer and For the first Steuer, we have direct English relatives.

You probably guessed it. Starboard has nothing to do with the stars. It comes from the verb to steer, which is about the idea of giving direction, and that’s also the core of das Steuer. It is the device to “steer” with.

But there’s also the verb steuern. It’s much more common in daily speech than it’s brother to steer and it’s used in a rather broad sense of guiding, controlling and even just going in a direction.

Cool.
So this was das Steuer.  And the other one? What does die Steuer mean? Well, it means … tax.
Das Steuer is a device for steering, die Steuer is a tax.  Hmmm… sounds like a random pairing, but think of the ever rising tax on tobacco. That’s the government trying to get the people to stop smoking.  Taxes as a means of soft-“steering” the people. That makes a lot of sense. But then again…was that really what monarchs had in mind? Like… were health concerns the reason why the king of France came up with the much hated tax on salt?

Proclaim to the realm: henceforth a tax shall be paid on salt,
for I am concerned about my subjects’ blood pressure.

Hardly. He just thought it was a clever way to get cash. So as compelling as the connection of tax and steering is, it’s not how the words connect.
So how do they connect? Is there even a connection?
Yes, there is. Steuer is actually one of the many many offspring of the super ancient Indo-European roots *sta-. That’s where to stand and stehen come from and die Steuer was simply once a general word for something that was standing and that helps you stand, and it could be a pole, a pillar or more figurative support. Like … a tax. Money helping the ruler “stand”.
And what about das Steuer and steering? How does the idea of giving direction tie in? Well… here’s a picture.
Poling a raft or a boat. Using a large pole to move it and direct it. So essentially it went from standing, to pole, to pole used for steering a boat to steering. Quite a crazy evolution, right? Go ahead, put it on the list of stories to tell your crush on the first date. You’ll be steering right for third base.
Big promise.

Speaking of broken promises… let’s look how to say tax cuts and the other common tax words in German.

And let’s not forget the two verbs that are based on die Steuer.

Jesus, Doppelbesteuerungsabkommen… this is humongous. By the way, do you know why the German language possesses such whales of words?
One theory says it’s because of, get this, taxes!
Back many many years, a king of Bavaria had a problem. He wanted to build the Disney cartoon castle but he needed loads of cash. So he came up with a brilliant idea… a tax on words. Not only would that create massive revenue, it would also shut down the incessant chatter at court, that gave him such a headache.
Or so he hoped.
But since the dawn of time, man has unleashed his full divine creativity when it comes to tax evasion. And just like the Brits would wall up their windows to evade the window tax, the German people came up with a work around. Compounds. Prefix verbs were first, but soon the “words” got longer and longer and little money was payed.
Crestfallen, the king secluded himself more and more, and the castle ended up the pathetic piece of crap that today is know as… Neuschwanstein.

I’m not a historian though, so I might be off here and there. By the way, what about my inner critic? Where has he been through all of this? Where are you when I REALLY need you, huh?!?!  You let me down, man! You let everyone down!!!
Anyway, that’s it for today. This was today’s episode of “History with Emanuel”, where some of it was actually true :).
Oh, and we learned something about tax and steering, too.
As always, if you have any questions or suggestions or if you want to try out some examples, just leave me a comment.  I hope you had fun.
Schöne Woche und bis nächstes Mal :).