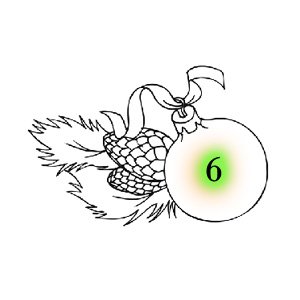 day 6 of our Advent Calender, it’s Nikolaus Day in Germany.
And today weI’ll hit you with a little bit of grammar, because we’ll talk about

I think most of you know this, but what’s not commonly talked about in books and courses is the fact that you don’t always have to use them. In fact, sometimes, using them is actually wrong. So the question today is

When to use contractions in German?

Now, usually you’d expect a bunch of rules now; like “If … then… . ”
And I guess we could do that. But the real truth is that we’re actually dealing with a continuum. A sliding scale. On the one end we have instances where using no contraction would sound wrong, on the other we have instances in which using a contraction is wrong and in between we have lots of instances where it’s kind of up to you.
And the key to this is … the finger-factor, or “pointy-ness”.
What do I mean by that?
Well, take these three sentences:

They all talk about a specific coffee but their focus, the intensity of pointing is very different. The first one sounds very general, while in the last one, you can kind of picture the finger pointing at that particular coffee.
Now, it doesn’t really matter when you’d use which of these sentences and what finer differences in meaning there are. The only thing that matters here is that you see a difference in “pointy-ness”.

Because, the crucial thing about contractions is this:

Wow, weirdest grammar statement ever.
But yeah, the question whether or not to use a contraction comes down to how pointy the article needs to be. The pointier, the less idiomatic a contraction will be.
Let’s look at examples…

This is pretty much the lowerst pointy-ness possible. We’re not even talking about a specific café here, but just the café  as a concept.
As soon as we decontract, the definite article actually becomes too pointy.

By itself, this is weird, because the article now points nowhere. There’s no specific café established in the conversation, so every native speaker will feel like “Which café?”.
But as soon as we modify the example, it works fine.

This example is kind of in the middle of the continuum that I mentioned. So here saying im Café would also work and it really depends on the personal preference of the speaker.
But that changes  here…

English already uses that here, but in German the “normal” articles have a broader range. But we absolutely cannot use a contraction here, because then we’d loose all pointy-ness. It would sound like this in English:

In the context we have, this sounds wrong. So yeah, using a contraction here is out of the question. And there’s an even more extreme case…

Here, dem is a relative pronoun. Its job is to tag this whole relative clause to the noun, so it needs a super strong focus and using a contraction here would basically be incomprehensible.

So there you have it. Contractions are really common in German, no question about that, but examples where there’s no contraction are probably just as common. And the question whether to use one or not depends on how pointy the article has to be.

We’ll do an exercise about that in a few days probably, but for today that’s it :).
If you have questions about it, just leave me comment. Have a great day and bis morgen.