"Alles gut." is a really common expression in colloquial German. Today, we'll explore all the contexts in which we can use it - with plenty of examples. 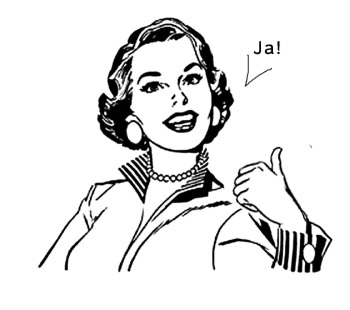 and welcome to a brand new mini series called Spoken German Bits. In this series, we’ll look at the colloquial side of German. It can be a word, a common expression,  a weird grammar structure or even a feature of pronunciation. All these things that you get to hear every day in Germany but that are absolutely not part of standard learning material – maybe because the material hasn’t caught on yet or maybe because the stuff is considered “wrong”. But wrong, shmong. Language is super democratic and if everybody does something, then that’s the language.
Anyways’… so this is what the new series is all about and today we’ll start with a look at a very useful phrase :

Now you’re like “What? That’s like All Good. Doesn’t seem particularly special to me.” But my observation is that the phrase has gotten pretty damn trendy recently. It has two usages and while one has been pretty standard for a while, I noticed that the second usage really caught on recently. Like… I hear it from all different kinds of people – teens, retired people, managers, models, TV hosts. And then, last night, when the neightbors’s cat that hangs out in our courtyard a lot, used it I realized: it is time to cut back on the dru… uh… I mean, it’s time to tell you about the phrase.  So you can impress your friends with how much you sound like a native speaker. And you can use it every day.
So are you ready to take a look? Perfect.

“Alles gut” for greetings at work

Or the more personal sounding version


What many non native speakers don’t know is that the phrase is nothing to throw around like the English “How’s it going.”

For example, if a random barista at Starbucks were to greet me by saying:


I would be really confused. Like… “Wait, do we know each other? Why should I tell you how I am?”.
And it’s  similar at work. Like… back a couple of years ago I’d work every Sunday morning. I’d get there all tired and my German colleague would be like “Hi” or even just wave and I’d wave back.  And we do like each other. My Italian colleague however, he would be like “Heeey, wie geht’s dir?” and that always felt a little tiny bit annoying. Well, annoying sounds so strong. Just… slightly uncomfortable. I’d feel like  “Jesus, don’t make me assess how I am and then word it.“. I’m  not used to just responding with something like “Good”, let alone “Great!!”. I mean… some aspects of my life are good, others are okay and some could be better so I don’t want to say just “Gut” because that would neglect that there’s ample room for improvement.  Okay seriously, German just doesn’t have this automated script and when being asked “Wie geht’s” a part of me feels compelled to give an accurate assessment of how I am. Like…

“Yeah, well I didn’t sleep very well and I’m still a bit sad about
that Maria thing but it’s not too bad. It’s okay. Don’t wanna complain. Could be worse.”

Now, these were personal impressions, but I think to an extent it is true for all Germans. The question “Wie geht’s” and even more so “Wie geht’s dir?” is not for a quick small talk between strangers and half strangers. And asking people you’re not really friends with “Wie geht’s” all the time, especially when they’re in a hurry or have work to do, can quickly get on their nerves. Not really badly, of course. Just a bit.

And that’s where Alles gut? comes into play. Because that question works much better.

This feel natural and comfortable. I think it’s because this is a yes or no question, not an open question like “Wie geht’s”.  I have only two options to respond and saying “Ja” is just much easier for me if life is like 67,31 percent good than saying “Gut.” Sounds stupid but it really makes a difference.
Now, of course this is not to be taken literal. Some people do greet each other at work using “Wie geht’s?” and some people find “Alles gut?” a bit presumptive. But I think overall, using “Hi, alles gut?” for the greeting small talk at work or at school feels more natural and it’s easier on your co-workers than the emphatic “Na, wie geht’s dir?”.

Cool. Now let’s get to the other alles gut.

This is the usage that I think is super trendy at the moment. Literally, alles gut means all good and people throw it in more and more as just a slight casual way to say “There’s no reason to worry.”
It’s really hard to explain, so let’s look at some examples

I hope these examples gave you an impression of how the phrase is used. It’s really for small everyday worries or problems. I use the phrase a LOT. I don’t know… it just feels nice and relaxed. And as I said… I feel like the use is increasing and spreading. So if you throw one in here and there, you’ll sound super uber native because you’re using the stuff that’s not even canon yet :).

So that’s it. This was our quick look at the phrase Alles gut. If you want to do a quick recap you can take the little quiz I have prepared for you :)

If you live or have lived in Germany, what are your experiences with the phrase? Have you heard it? Do you use it? And if you have a job here, what are your experiences with Wie geht’s?  And if you’re a German native speaker, do you agree with what I said? Or do you call BS?
I’m really curious to read your thoughts about it so leave me a comment.
I’m out for now, schöne Tage euch und bis nächstes Mal.