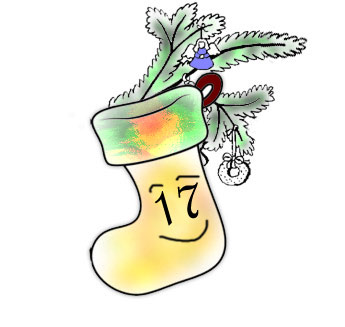 day 17 of our epic calendar and today, as promised a few days ago, we’ll talk a bit about the origin of

I think most of you know that blau means blue. And the reason for this word is simply that when people were naming the colors they were like “This one looks like the sky.”
And the sky was blue, so that’s how they picked the word.
Like… I didn’t do research about this, but I have a gut feeling, and that’s all the science I need.

Anyway, the reason we’re talking about this is NOT the color but the fact that blau is also a REALLY common word for drunk.

And you will not believe the likely origin of that (and I actually did research for this).
Here it comes:

Back some 500 years ago, the main (actually only) way in Europe to dye a fabric to the color blue was a certain plant – (dyer’s) woad. 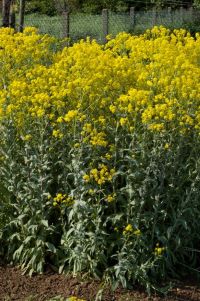 Now, I ain’t no expert in colors, but these look pretty yellow. The plant is playing us for suckers, though, because the leaves actually contain a chemical, that if fermented and mixed with other chemicals yields the colorant indigo.
Now, the other chemical that was needed conveniently happened to be part of something we all have… urine. Yes, urine. And it would work even better when you added a bit of a certain other chemical called ethanol, also known as alcohol. Which was pretty expensive in pure form back then.
And now guess what them dyers did.
They were like “modern problems need modern solutions.” and they drank a lot of beer and then peed repeatedly on the squashed leaves and the fabric.
That way, they had a lot of urine, they had the chemicals premixed in their body, and they had a jolly good time.
And then, when the fabric had turned blue, they’d hang it up and hang out with a hangover while it would dry.
Which is probably the origin of the expression blau machen, which means to skip work (when you should be working).

Pretty crazy story, right?
Now, I have to say that this is NOT 100% certain. Not the technical side… you can get blue colorant that way. But it’s not entirely certain if this is REALLY the origin of blau sein and blau machen.

But hey, haters gonna hate and it’s definitely the most fun version and it is “legit” enough to have been featured on the main German television channel in a science show for kids… some of you might know it, “die Sendung mit der Maus”.
Which is AWESOME by the way. Seriously… if you’re B1 or above, check out their videos. There’s so much love in them.
I’ll leave the links below, so you can check it out. The second one is hilarious!

So, now you know the likely origin of why blau means drunk.
And that’s it for today.
Let me know your thoughts in the comments, have a great day and I’ll see you tomorrow.

Urine was actually used to make the color more permanent in the fabric. The Smithsonian Magazine had a nice summary of pre-industrial uses of urine, readers might find interesting.
https://www.smithsonianmag.com/science-nature/from-gunpowder-to-teeth-whitener-the-science-behind-historic-uses-of-urine-442390/

Great! Thanks for sharing :)

I can’t believe I just noticed the math under the stocking and title. You’d think an old math teacher would notice patterns. Guess I was to anxious to get to the German. Shouldn’t the minus sign in front of (0!) be a plus for this? 2, 4, 16 plus 1. Or am I missing your pattern? Now I have to go back and look at the other days….fun for me.

Yup, should be + :).
I’m sure that’s not the only mistake, to be honest, so please please let me know if there’s another one.
Maybe I should do something with sin or cos or e or i… but my math is rusty :D. (I did look up 0!, actually.

I know that in eighteenth century England, beerhouses uses to sell vats of customers’ pee to textile factories. Perhaps that avoided the problems of having all your employees in a permanent state of inebriation!

I don’t know if you know this, but in Russian the color that’s the sky color is a COMPLETELY (like, nothing in common) word than blue. Blue is blue, like royal blue or navy blue. In Russian it’s siniy. Light blue, like the sky or people’s eyes is goluboi. You’ll never call someone’s eye color or the sky “blue” in Russian.

Wow, that’s news to me!
I asked my Bulgarian grilfriend and they definitely use their version of siniy and she’s never heard of goluboi.

Would people understand what I meant, though, if I say the sky is siniy?

And do you use goluboi for something other than eyes and skies?

In Català language the same color is also BLAU

Wow, that’s interesting. I wonder how the word made its way there.

“would work even when you added a bit of a certain other chemical called ethanol” – should this be “even better”? As it is, it reads like the ethanol isn’t necessary to the process.

Oh dang it, yes, I meant “even better” and “you ought to be working”. Sorry for the confusion.

When I was a youth, stores and most everythang was closed on Sunday in the US of A – these rules were referred to as the “blue laws”.

Blue being used like that in English comes from the 17th century, as a disparaging reference to rigid moral codes and to those who observed them… particularly in blue-stocking, a reference to Cromwell’s supporters in the parliament of 1653.
(gracias, wikipedia)

so drinking tinted the clothes which teetotalers preferred.

True or not, this story is a great way to memorise the word/expressions and that’s good enough for me!
You said blau machen means to work (blau machen, which means to work) but your example seems to suggest the opposite, i.e. “not to work”. Heute mache ich blau, translated as I’m not going to work today… I’m confused on that one…

Yeah, I forgot “NOT” there. Blau machen means to NOT work :)

Die Sendung mit der Maus is also available in pod form for those of us who aren’t willing to sit glued to the New Boob Tube/idiot box.

Listened to that one and Logo (children’s news) every day for nearly two years. Still listen to Radio Teddy Nachgefragt. Can highly recommend all three.

Is that just the audio track of the show or do they produce new content for pod format?

Hi Emanuel, I understand the origin of the Sprichwort “aus die Maus”. But why is it die rather than der?

I think that is nothing but a rhyme. There is no grammar in there.

Dance with Shadows
Reply to  Emanuel

Thanks. I was beginning to think I did not understand the dative case at all.

No, it doesn’t mean “out of the mouse”. Then it should indeed be “der”.

Totally unexpected backstory to that phrase, but very interesting!!

“the expression blau machen, which means to work (when you should).”
Should say “to NOT work” or “to SKIP work”, right?

Oh, yeah, sorry for the confusion!!

Things I never thought I would learn when I decided to learn a foreign language: for thousands of years, people had to stomp around in pee dye to make pretty blue fabric. (How did they figure out how that works?)

Is that what “Ferris Bueller’s day off” is called in German or are you talking about a different film?

“(How did they figure out how that works?)”

I am wondering that about a LOT of things. Including cat poo coffee.

or even just coffee… getting from a red berry to a hot drink is quite a few steps.

Also cassava https://en.wikipedia.org/wiki/Cassava#Potential_toxicity …”hmm, we soaked it and let it dry for 4 hours, Jimmy still died. Shall we try 5 hours?”